The U.S.-led coalition’s three-year bombing campaign against ISIS may have reached unprecedented levels in August, but Air Force Secretary Heather... 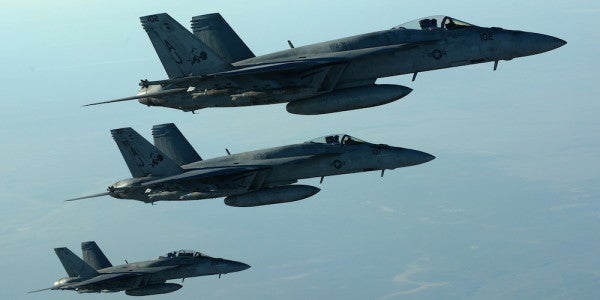 The U.S.-led coalition’s three-year bombing campaign against ISIS may have reached unprecedented levels in August, but Air Force Secretary Heather Wilson is worried about a potential source of friction at home: Congress.

Speaking at an Air Force Association symposium on Sept. 19, Wilson stated that congressional jousting among lawmakers over the fiscal year 2018 defense budget could dramatically affect the branch’s ability to replenish the missile and bomb stockpiles rapidly depleted by the accelerating air campaign of Operation Inherent Resolve.

“Probably the most important thing with respect to munitions is to get a budget,” Wilson said, per Defense One, pointing the finger at Congress’ move to halt spending at 2017 levels for the first several months of fiscal year 2018. “Budget uncertainty impacts our ability to work with industry and give them certainty on the amount that we’re going to buy and ramping that up where we can.”

According to Wilson, the Air Force is firing off around 100 precision weapons a day. In August, U.S. aircraft in August dropped some 5,075 munitions on ISIS targets in Iraq and Syria — the most deployed in a single month since the beginning of Operation Inherent Resolve there in August 2014, according to U.S. Central Command’s latest summary of U.S. airpower in the region.

The accelerating pace of bombing sorties has actually been placing a strain on munitions stockpiles since at least February 2016, when the Department of Defense requested an extra $1.8 billion in new smart bombs as part of its fiscal year 2017 budget. Around the same time, U.S. Pacific Command Commander Adm. Harry B. Harris Jr. insisted before the Senate Armed Service Committee that “critical munitions shortfalls are a top priority and concern.”

According to Wilson, the Pentagon has been aggressively working with defense contractors to rapidly increase production of precision-guided munitions since “at least” May, around the same time that Harris testified to the critical munitions shortfall for the second time.

“We are short on things like Small Diameter Bombs,” he told the House Armed Services Committee on May 1. “These are not exciting kinds of weapons… but they are absolutely critical to what we are trying to do, not only in North Korea but also in fights in the Middle East.”

While defense contractors had already quadrupled bomb production to meet increasing demand for ISIS-ready munitions, Navy and Air Force officials have petitioned companies like Boeing to expand production of the SDB from 1,000 units annually to 8,000 by 2019, as well as ramp up production of the Joint Direct Attack Munition (JDAM) guidance kit to convert “dumb” bombs into GPS-guided precision munitions.

And in May, Mattis himself “personally intervened” to stuff many “preferred munitions” — including 7,312 SDBs and 34,529 JDAM kits — into the Pentagon’s $16.4 billion budget request for munitions and missiles alone.

With both government and private-sector defense players pivoting on the fly to adjust to the growing demand for munitions in the fight against ISIS, the responsibility lies with Congress to actually pass a budget that allows Pentagon planners to actually support American troops already downrange.

Until then, OIR may find itself forced to continually raid bomb stockpiles elsewhere, with potentially damaging effects not just on readiness and airpower, but on those Americans on the front lines of the fight against ISIS.

“If we’re going to have a continuing resolution for three months or six months out of the 12-month year, how are they going to manage that?” Wilson said, per Defense One. “It becomes a real problem when you’re trying to create a relationship of trust to allow a company to do capital investment to provide for the needs of the warfighter.”