Is your daily road commute murder? If a group of lawmakers has their way, that won’t happen in their heartland... 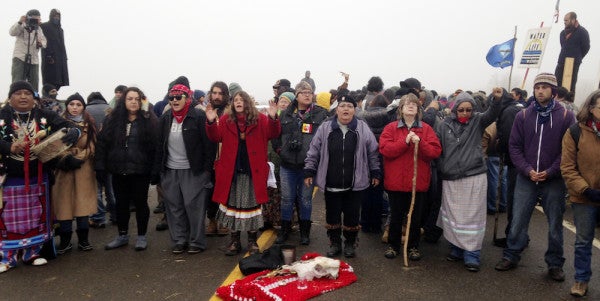 Is your daily road commute murder? If a group of lawmakers has their way, that won’t happen in their heartland state … ever.

After enduring more than a year of protests — many led by veterans — against the Dakota Access pipeline, North Dakota Republicans have introduced a bill that would exempt the state’s drivers from responsibility for “accidentally” killing pedestrians in the roadway with their vehicles.

A sort of “stand your ground” statute for automobiles against human bodies blocking the street, House Bill 2013 states that “a driver of a motor vehicle who negligently causes injury or death to an individual obstructing vehicular traffic on a public road, street, or highway may not be held liable for any damages.” It awaits a committee hearing on Friday morning.

One of the bill’s seven Republican sponsors, Rep. Keith Kempenich, confirmed to the Bismarck Tribune that it was inspired by the pipeline protests. He cited his mother-in-law’s recent experience getting stuck in traffic jams and weaving around protesters who had gathered “near roadways” during the contentious DAPL fight.

“[The roads] are not there for the protesters,” Kempenich said. “They’re intentionally putting themselves in danger.” He added that protesters put a lot of pressure on drivers, who could catch hell “if they’d have punched the accelerator rather than the brakes.”

The bill, Kempenich said, is “shifting the burden of proof from the motor vehicle driver to the pedestrian” — in effect, forcing injured or maimed pedestrians to prove in a court of law why they shouldn’t have been struck by a ton or more of human-operated sheet metal and engine.

Sympathizing with anyone who is stuck in traffic is, of course, an American tradition, all the more so in rural areas where roads are lifelines and plenty of people moved to get away from that big-city bullshit.

On the other hand, a lot of vets are taught that firearms never have “accidental” discharges, so deeply ingrained is their sense of safety and responsibility. It might feel a little weird to relieve grandma of her daily duty to mind the corners of her F-250.

Plowing into bystanders who don’t share your mindset is also a favorite jihadi tactic. When you creep up on those demonstrators in second gear, you’re creeping like sharia.