From the enterprise that brought humanity triage, ligatures, and ambulances comes the next big thing in life-saving medical technology: a... 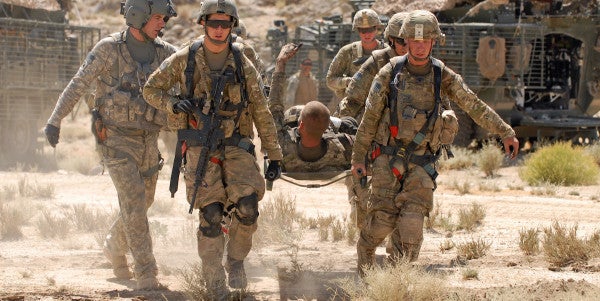 From the enterprise that brought humanity triage, ligatures, and ambulances comes the next big thing in life-saving medical technology: a futuristic substance capable of stopping internal bleeding on a battlefield.

The Army is supporting clinical trials for what the service’s Medical Materiel Agency described as “a self-expanding foam device to stop massive intracavitary abdominal bleeding” in a June 5 announcementflagged by Army Times. According to the agency, this “foam device” would work like “a caulk gun” to seal wounds in a matter of seconds:

The device resembles a caulk gun that contains expandable foam designed to be injected into a patient by a trauma surgeon. The injector allows two separate chemicals to mix, causing the product's material to rapidly expand inside the abdomen to about 35 times its original volume. The foam is designed to expand around the patient's internal organs to stop bleeding and can be left inside the patient for up to three hours.

Sounds unpleasant as hell, but it beats exsanguination, the technical term for bleeding out, and “the most common cause of potentially survivable death” among U.S. troops, according to the Department of Defense. In 2012, a peer-reviewed study of more than 5,000 war deaths by Army surgical researchers found that more than 90% of the preventable fatalities were from exsanguination.

Nor is the foam solution a pie-in-the-sky fantasy: The idea began with a DARPA-supported project in 2010 between Harvard University, Massachusetts General Hospital and Arsenal Medical that produced “a novel, self-expanding polyurethane foam” for the cause. After animal testing, the Army took the project under its wing in 2015.

Still, researchers are trying not to make the ooky, science-fictiony project sound like a panacea for all manner of grievous injuries.

“Right now, we are looking at this device as a potential stop-gap for patients awaiting surgical care,” Leigh Anne Alexander, product manager for the Army Medical Materiel Agency, said in the announcement. “This is not going to repair the injury but it could be a 'bridge to surgery,' keeping the patient alive long enough to give them a fighting chance at survival.”