Neither Bolyard nor his fellow advisors were wearing body armor, as part of an effort to show trust with the Afghans. 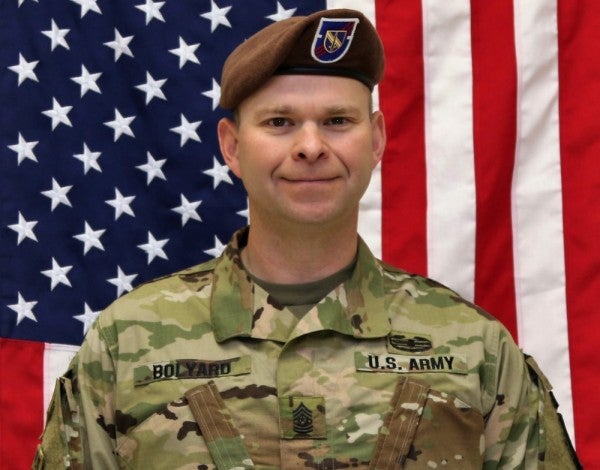 Command Sgt. Maj. Timothy Bolyard died on what was otherwise a perfectly quiet day at Forward Operating Base Maiwand, Afghanistan. In an Army investigation that was released to the public this week, witnesses described how completely typical a routine meeting with local Afghan security forces had been on Sept. 3, 2018, up until two Afghan policemen opened fire on the unarmored, unsuspecting Americans, killing Bolyard and nearly killing another soldier.

“None of the witnesses noticed any suspicious behaviors or insider threat indicators during the Shura,” according to the investigation. “Nothing out of the ordinary, and the Shura proceeded as previous shuras had. No one reported tensions or arguments between U.S. personnel and their Afghan partners.”

Instead, the document, which was first reported by Army Times, describes an atmosphere of trust between the advisors of the 3rd Squadron, 1st Security Forces Assistance Brigade and the Afghan troops they were assigned to train.

In fact, the advisors trusted the Afghans enough to leave their body armor behind when they left their compound that September morning and walked to the nearby Afghan Army-held FOB Maiwand, where they spent two hours discussing security for upcoming elections.

Related: Army Soldier Killed In Afghanistan Insider Attack Was On His 13th Deployment

“The overall [force protection] posture was appropriate,” the investigation said. The American commander “made the calculated decision not to wear [personal protective equipment] to the Shura based upon the level of threat, risk, and various mitigations emplaced.”

But the Afghan National Army soldiers were not the only ones at the meeting. There were also plenty of other key Afghan leaders, their personal security details and Afghan National Policemen, who were invited due to their heavy involvement with election security, the investigation said.

Even so, American soldiers noticed nothing suspicious about the newcomers, who chatted and joked amongst each other as the meeting went on. A previous insider attack happened in south-central Afghanistan earlier that year, but members of 1st SFAB had extensive training on responding to such attacks, and there was no expectation that one would occur at FOB Maiwand.

“Prior to the attack the threat level was moderate, with no known or reported incidents of Green on Blue in historical reporting at FOB Maiwand,” the investigation said.

The meeting broke up, with one group of Americans heading to the FOB’s dining facility for lunch and another group heading to the latrine first. Bolyard went with the second group, which was within 60 meters of the DFAC at 12:10 p.m. when they heard gunfire.

“Group 2 reacted by finding cover,” the investigation said. “No member of the group could return fire, as they did not have [positive identification] of the shooter or the origin of he fire.”

Witnesses saw Bolyard draw his pistol look north, then south, then fall to the ground. Within two minutes, the gunfire had stopped and soldiers from both groups called for help over the radio, then swept the FOB. Soldiers found Bolyard “lying on his stomach in an awkward position, indicating possible spinal injury and struggling to breathe,” the investigation said.

Bolyard’s buddies rolled the sergeant major onto his back and noticed unevenness in the chest cavity, indicating a collapsed lung. Bolyard had been shot in the back, but there was no exit wound and minimal bleeding.

When help arrived, they carried Bolyard on a stretcher back to the SFAB compound, then loaded him onto a Mine Resistant Ambush Protected vehicle and drove him to a forward surgical team at FOB Dahlke-East. Soldiers gave Molyard CPR the whole time, but when he arrived at the FST he had no pulse or cardiac activity on the ultrasound, the investigation.

The medical team tried to stop the bleeding, transfuse blood and restart Bolyard's heart, but to no avail. The 42-year-old Bolyard, who was on his 13th overseas deployment and had been awarded six Bronze Stars (two with valor devices), was pronounced dead at 1:24 that afternoon.

The perpetrators were two ANP members who fled FOB Maiwand in the chaos after the shooting. They were tracked down and arrested later that day, the investigation said. One policeman fired three to four rounds from an AK-47, while the other fired two bursts of about four to six rounds from a PKM. One of those bullets nearly killed an American infantryman at Maiwand, but it was stopped by the helmet he was wearing.

“No one recognized the shooters or knew the individuals who committed the attack,” the investigation said. “None of the witnesses knew why the attack was committed.”

Unfortunately, Bolyard wasn’t the last American killed in an insider attack in Afghanistan that year. Maj. Brent Taylor, a member of the Utah National Guard and the mayor of North Ogden, Utah, was killed in such an attack on Nov. 4, 2018, and Gen. Austin “Scott” Miller narrowly survived a shooting on Oct. 18.

“Insider threats are the number one risk associated with the [train, advise assist] mission and was constantly discussed and trained for throughout the deployment as it was also considered the enemy’s most dangerous course of action for every mission and location,” the investigation said.