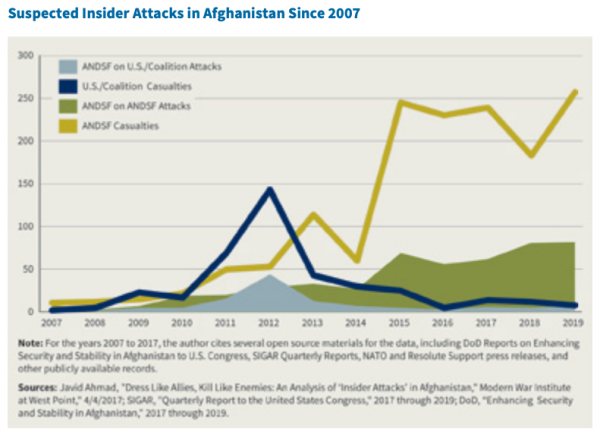 Last year was the “deadliest year on record” for insider attacks carried out in Afghanistan, according to a new inspector general report to Congress.

In its first quarterly report issued for 2020, the lead inspector general for Operation Freedom's Sentinel in Afghanistan marked the grim milestone in attacks on Afghan security forces by their own colleagues, which are sometimes referred to as “green-on-blue” attacks.

According to the IG, insider attacks resulted in 257 casualties among Afghan forces in 2019, with 172 killed and 85 wounded. Some were carried out by Afghan soldiers, while others were done by “Taliban infiltrators,” said the report, which was publicly released Tuesday.

Meanwhile, the coalition said this quarter there were no insider attacks that “exclusively” targeted its service members, though 17 attacks were carried out against Afghan forces so far in 2020. Those attacks resulted in 48 Afghans killed, or nearly 28% of the number of deaths attributed to insider attacks in 2019.

“Since 2015, attacks against [Afghan security forces] and the resulting casualties have remained high relative to those against U.S. and coalition forces,” the report said. Despite the Afghan Ministry of Defense implementing a new insider threat policy in 2017, attacks have continued to rise in the years since, according to the IG.

There was a dramatic increase in the number of attacks against coalition forces starting in 2011, with insider attacks accounting for 15% of deaths the following year. At the time, military commanders became so concerned about the possibility their Afghan counterparts might turn on them that they implemented additional vetting procedures and designated some soldiers as “guardian angels” to watch over their troops as they worked together. The numbers of attacks against coalition forces has been relatively low since 2015, according to the IG, as those troops gradually transitioned from combat to more of an advisory role.

Although the threat to U.S. forces has decreased, insider attacks still remain a threat. As the IG noted previously, one such attack in Feb. 2020 killed two U.S. soldiers, while another in Dec. 2019 ended with 23 Afghan soldiers dead.

Army Brig. Gen. Jeffrey Smiley and two NATO contractors were wounded by an insider attacker in Oct. 2018, which the Taliban claimed was targeting Gen. Austin Miller, the current commander of coalition forces there. Though Miller was unharmed, the police chief and intelligence chief for Kandahar province were killed.

You can read the full IG report here.