The U.S. military dropped more munitions on targets across Afghanistan in 2019 than during any other year stretching back to at least 2009, according to Air Force data 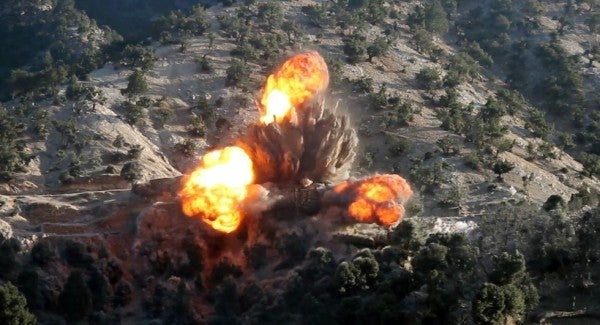 According to Air Forces Central Command's
airpower statistics, U.S. aircraft dropped 7,423 munitions across 2,434 sorties as part of Operation Freedom's Sentinel and NATO's Resolute Support mission, and increase over the 7,362 weapons released across 966 sorties in 2018.

Those weapons releases eclipse the 5,100 and 5,411 munitions released across 2,517 and 2,678 sorties in 2010 and 2011, respectively, the height of the U.S. troop surge in Afghanistan that occurred under the President Barack Obama.

The AFCENT data does not detail whether the munitions releases targeted Taliban or ISIS militants, the latter of which number on the hundreds in Afghanistan's Nangarhar Province

Munitions releases have dramatically increased since President Donald Trump took office, rising from 947 and 1,337 in 2015 and 2016, a sign that the commander-in-chief's campaign trail promise to “bomb the shit” out of ISIS extends to the Taliban as well.

As Military Times notes, the Pentagon recently detailed that U.S. Forces-Afghanistan had in the fall of 2018 “adjusted its campaign plan” in order to “intensify pressure” on the Taliban and drive the militant group to participate in negotiations to end the 18-year-old war there.

Both Trump and Defense Secretary Mark Esper both stated last year that the U.S. military would continued to escalate strikes against the Taliban following the breakdown of peace talks in early September in response to ongoing attacks against U.S. and Afghan personnel.

“We did pick up the pace considerably,” Esper told reporters on Oct. 4. “The president did want us to pick up response. You had the heinous attacks that the Taliban and others conducted throughout Afghanistan.”

The following December, the Taliban denied that the group had agreed to a temporary cease-fire with the U.S.-led coalition there despite reports to the contrary.

“The reality of the situation is that the Islamic Emirate has no intention of declaring a ceasefire,” the Taliban said in a statement. “The United States has asked for a reduction in the scale and intensity of violence and discussions being held by the Islamic Emirate are revolving solely around this specific issue.”