The M320 Grenade Launcher Is Finally In The Marines’ Hands

For years, the Marine Corps has relied on the tried and battle-tested but tired M203 grenade launcher gracing their rifle... 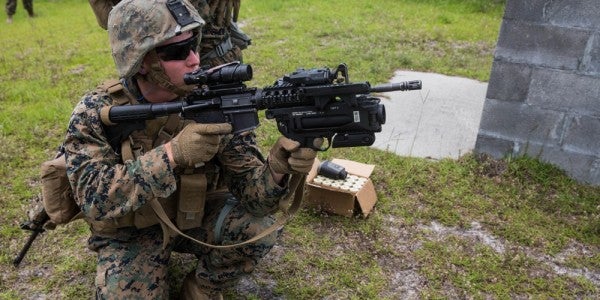 For years, the Marine Corps has relied on the tried and battle-tested but tired M203 grenade launcher gracing their rifle muzzles, but the times, they are a-changin’. Only eight years after the Army got theirs, the Corps has finally gotten its hands on the M320 grenade launcher.

The 2nd Combat Engineer Battalion became one of the first Marine units to receive the new grenade launcher when they took them out to the range at Camp Lejeune, North Carolina, on June 6.

The most significant difference between the M320 and the M203 is the former’s ability to be used as a standalone system; the M203 is permanently affixed to a rifle. The old M203’s leaf leaf sight can mess with your weapon’s optics, too. But the sights on the M320 are more flexible, which makes you a bit likelier to hit, or at least land near, your target. The M320 loads from the side, which allows for longer projectiles with increased velocity, compared to those fired from the M203, an under-the-barrel breechloader.

“The M320 definitely provides our Marines with a more efficient weapon system,” Cpl. Nelson Gay, a squad leader with 2nd CEB said in a Marine Corps statement. “The M320 has an increased rate of fire, and also allows the operator to acquire their targets much faster; used as either a standalone weapon or on a host weapon, it’s an accurate and efficient system.”

The M320, like most grenade launchers, provides significant firepower to ground troops, allowing them to engage enemy combatants, obscure or mark areas with smoke, and hit targets or bad guys that aren’t reachable with direct fire.

While this is good news for the service, it’s sure to make plenty of current and former Marines remember an old Corps truism: We get everyone else’s hand me downs.

With the Army already producing a fancy new combat helmet, and the Corps just announcing they’ll finally have enough Enhanced Combat Helmets for all Marines, it makes you wonder where these M320s came from.

In completely unrelated news, the Army is looking at a replacement for the M320.