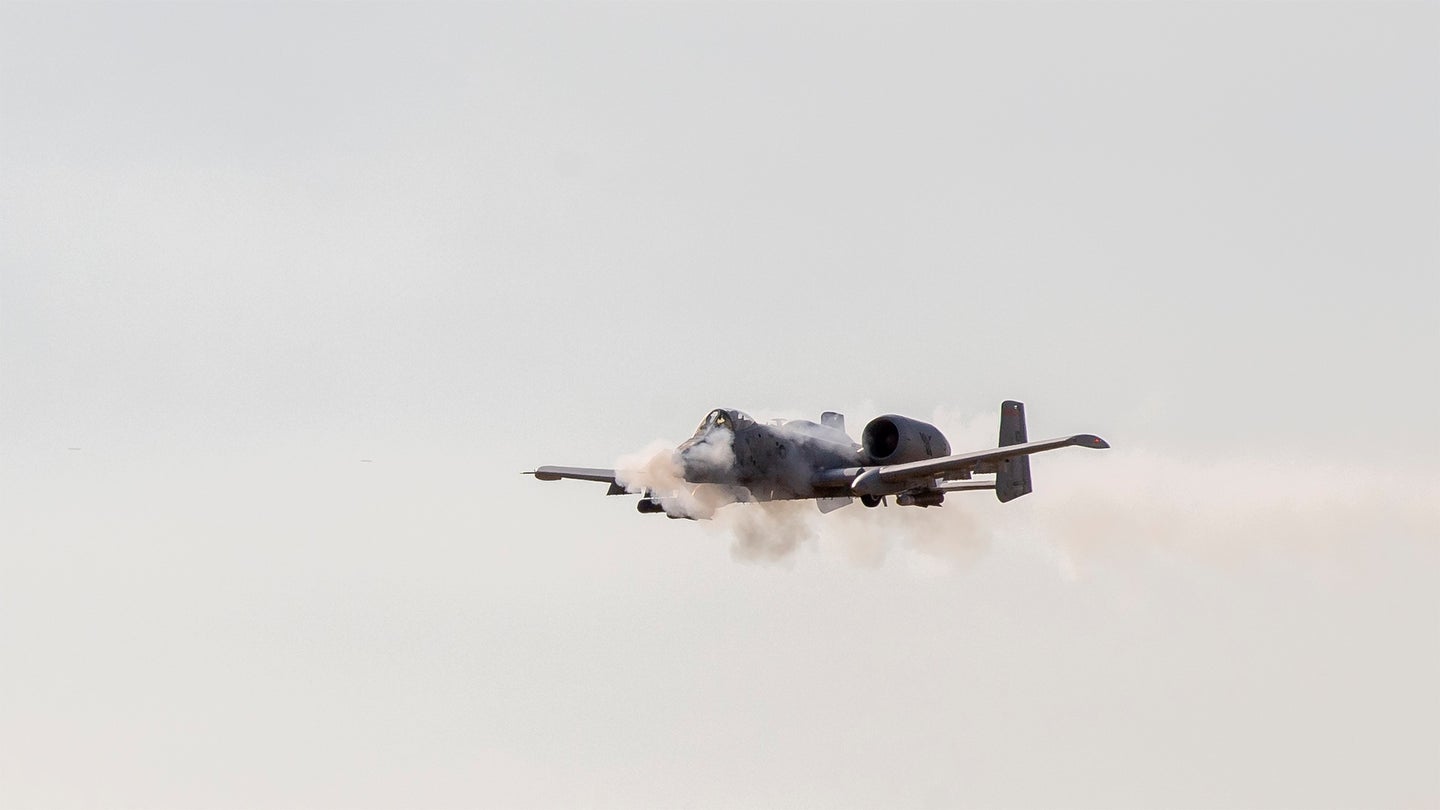 More than 30 A-10 Warthogs assembled in one place, with every squadron in the Air Force that currently flies the airframe represented in a friendly competition to see who is the best of the best. That’s the premise of ‘Hawgsmoke,’ an event that brings together the Air Force’s community of A-10 Thunderbolt II pilots and maintainers as they unleash plenty of the aircraft’s signature “BRRRT.”

The 2022 event was hosted by the previous winners, the Idaho Air National Guard’s 124th Fighter Wing, at Gowen Field in Boise, Idaho, from Sept. 6-9. The home team, so to speak, took the crown, as the 190th Fighter Squadron – known as the “Skullbangers” – won the event. That’s a repeat victory for the 190th, who also achieved top honors at “Hawgsmoke 2021,” and the third win for the unit since the event began more than two decades ago.

The competition tests the maintenance, weapons loading, bombing and strafing capabilities of each of the squadrons.

More than just a competition, though, the Hawgsmoke event is about getting A-10 pilots and maintainers together in one place for a week to demonstrate everything the aircraft is capable of.

“The overall competition is about tactical training,” said Col. Ryan Richardson, the 124th Operations Group commander in an Air Force press release. “Yet it’s more than that, it’s about the community of pilots and maintainers, and about showing our local community who we are and what we do.”

The Hawgsmoke competition dates back to 1996, when then-Col. Cliff Latta, operations group commander of the 110th Fighter Wing in Battle Creek, Michigan hoped to showcase his unit to other Air National Guard members, according to Hawgsmoke.com, the event’s unofficial website.

The name is a play on words for an older Air Force gunnery and bombing competition known as “Gunsmoke,” which was discontinued in 1995.

In 2000, the competition really came into its own, when it started expanding to include participants from every A-10 squadron in the Air Force.

“Hawgsmoke was established to allow current Hawg Pilots an opportunity to show their stuff.  The goal was to have a low key fighter pilot weekend with the comrades…that just happened to have a competition attached,” said Latta.

Now, for as long as the A-10 is flying, pilots gather every couple of years to test the “combat capabilities of hawg drivers in bombing, missile, and tactical gunnery tactics, techniques, and procedures,” reads an Air Force press release for the competition.

That means plenty of “BRRRT.”

It’s also a chance for pilots and maintainers to get together to celebrate and remember. The 2000 Hawgsmoke opened with a ceremony for fallen comrades, a flyover by a missing-man formation, and the participants downing a shot of whiskey and smashing the glasses. This year’s event featured a flyover by a P-40 and P-47, aircraft that performed similar roles to what the A-10 does today.

So, if the A-10 is going to keep flying, bring on more Hawgsmoke.