After a 2,100-mile trip from Washington, Air Force Capt. Anthony Giebelhaus, his wife Brittany, brother Austin, and their dog Peanut... 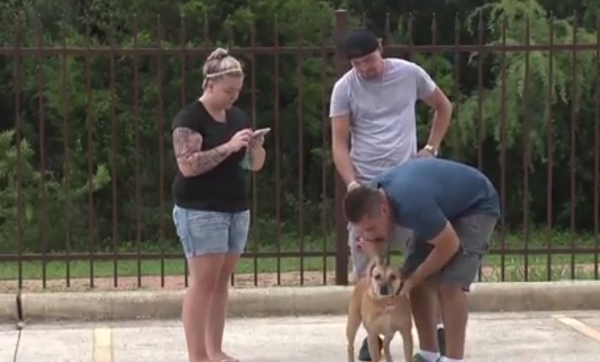 After a 2,100-mile trip from Washington, Air Force Capt. Anthony Giebelhaus, his wife Brittany, brother Austin, and their dog Peanut checked into the Drury Inn, in San Antonio, Texas on Aug. 21.

They left their cars and motorcycle in the lot, and after bringing Peanut up to the hotel, they decided to eat before unloading and unpacking.

Less than hour later, however, the cars and all of their possessions were gone, leaving them nothing to unload or unpack.

“I thought he was kidding,” Anthony told ABC’S San Antonio news station, describing his reaction when Austin told him that everything they had was stolen from the back parking lot.

Anthony, who is starting flight instructor training at Randolph Air Force Base, reported that all his medical and flight records and his flight suits are gone, too.

The inn, which sits just off Interstate 10 and Loop 1604, made the perfect spot for a getaway for the thieves. According to the local news station, the robbers were gone in less than twenty minutes with both cars and the motorcycle.

The family said they can't help but wonder if it was an inside job or whether more than one thief was involved.

“There was no broken glass, nothing,” Anthony said.

He added that San Antonio police told him they would alert officers to be on the lookout for their vehicles.

Though their possessions were gone, Brittany found solace in the fact that Peanut was already upstairs in the hotel.

“She's literally part of our family, and it just breaks my heart she could have been in that car,” she added.

Watch the ABC KSAT report below.