All Military Service Deserves Equal Respect, Regardless Of MOS

Instead of giving each other the mutual respect they’ve earned, far too often, veterans put each other down. It sometimes... 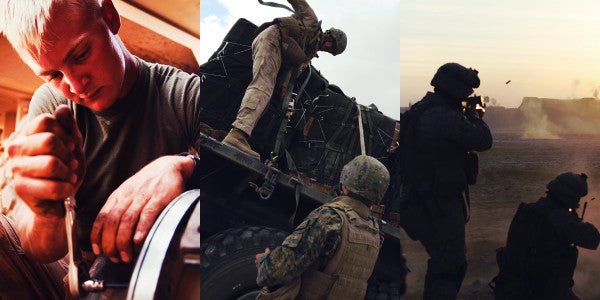 Instead of giving each other the mutual respect they’ve earned, far too often, veterans put each other down. It sometimes goes beyond healthy rivalry and into incivility and insults, sometimes in person, sometimes behind others’ backs, and of course, without tact, or for that matter, even decency, on the internet.

Between services, the rivalry is obvious, and has been around since the services were conceived. The internet has amplified this further, as it does for many things. But there are further divisions within each service and it seems as if those are more damaging than competitive. Grunts versus POGs. Ground versus air. Combat arms versus support. People aren’t satisfied with being part of the 7% of the U.S. population who have served in the military, or even the 0.4% serving now, apparently, so they throw their comrades under the bus to make themselves feel better. Sometimes it makes you wonder if some people are… compensating for something.

Among friends who are service members or veterans, that’s undoubtedly true. Giving and taking shit is part of the drill. The military’s a rough-and-tumble place. Life is tough; wear a cup. Et cetera, et cetera.

But, often, it’s not healthy sarcasm. It’s dismissing the achievements of other service members and veterans because they didn’t do the same job you did. It’s insulting another vet or his opinions because his job was “soft” or “stupid.”

Twitter, as always, offers plenty of examples of this type of targeted hostility.

Fucking CLB 3 a bunch of fucking POG's thank you so much for this 48 hour defense 100ft from a fucking military airfield!!!

Tired of hearing POG ass bitches complaining about their jobs. Pussy you aren't doing shit! Join the military to do a real job. Desk warrior

In reality, few people really know what others have gone through to get where they are. An old sergeant major at one of my old squadrons was a lifelong and obvious grunt, but he spent a few shifts tagging along with aircraft maintainers. He was legitimately blown away by the hours they spent and the efforts they made to keep the aircraft flying.

He would never use the phrase “swing with the wing” again. That’s not to say that most of those maintenance Marines were ready to go on patrol with the infantry, but their work required incredible efforts that most would never appreciate unless they took the time to learn.

I’m not one to say that every veteran is a hero. Officer or enlisted, combat arms or support, most people just do their jobs honorably. That’s true of any group of troops. That’s all we can ask and it’s more than enough. And it’s a whole lot more than most people who haven’t served in the military or other fields of public service, like fire or police, can say.

Related: If You Call All Veterans Heroes, You’re Getting It Wrong »

I will say that every veteran deserves to be heard without his (or her) fellow veterans saying he isn’t good enough because his experience differed from the critic’s. If a former supply clerk gives detailed critiques of infantry tactics, he’d better have some solid justification, as would an infantryman giving a lecture on the intricacies of ordering parts, though that would likely be a far less interesting lecture. If they’re just talking about what it’s like being in the military, then cut that person a huss, because everyone from a cook to a commando is part of the military and equally able to talk about the good times and bad times of a calling that few answer.

It’s pointless to argue over who’s the toughest when there’s always someone a little more badass. For every bro who thinks he’s “operator as fuck,” there’s some ninja mofo doing black ops getting a paycheck laundered through a labyrinth of front companies who could kick his ass.

It’s equally pointless to describe the oft-maligned combat-arms fields as being solely for the stupid. You can say what you like about an artilleryman like Napoleon, a tanker like Patton, or an infantryman like George freaking Washington, but they weren’t stupid men.

Military life is military life. Every service member and veteran has a story. Every veteran has experiences that few others can lay claim to. Every veteran has earned the title of soldier, sailor, airman, Marine, or Coast Guardsman. Their stories may differ, and some may not be the classic war stories of yore, but they are worth telling, especially among their fellow veterans. And certainly without being put down because they aren’t “equal” to yours.