A Soviet Nuclear Torpedo, An American Destroyer, And The Cuban Missile Crisis

Without a doubt, the event that occurred on Oct. 27, 1962 — designated as “Black Saturday” by the Kennedy White... 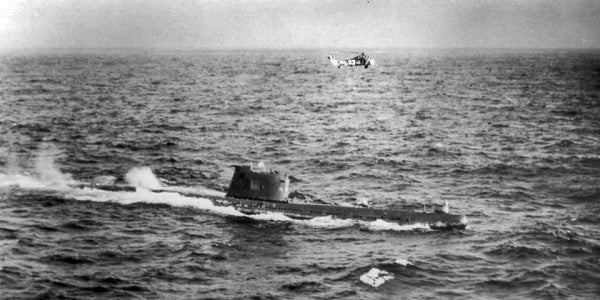 Without a doubt, the event that occurred on Oct. 27, 1962 — designated as “Black Saturday” by the Kennedy White House — was the most significant of my naval career. That day, I found myself, a 23-year-old ensign, standing watch on the bridge of the USSCony. The Cony was part of the hunter-killer Task Group Alpha, a squadron of eight antisubmarine warfare destroyers and the USSRandolph, an antisubmarine warfare aircraft carrier. We were fully equipped to hunt down Soviet submarines and to destroy them as part of the naval quarantine of Cuba during the Cuban Missile Crisis.

In 1961, after graduating from the University of Michigan, I had been commissioned as an ensign in the U.S. Navy. I attended two months of Navy communications and cryptology training, followed by four months of training in shipboard electronics. Upon completion of this training, I was assigned to the Cony, an antisubmarine warfare destroyer based in Norfolk. There I served as both electronics officer and then as communications officer.

Task Group Alpha was operating on the Quarantine Line about 300 miles southwest of Bermuda. Naval intelligence had identified four Soviet submarines traveling southward toward Cuba. The subs were sailing in advance of Soviet freighters that were transporting additional nuclear missiles and other arms for Castro’s forces. We knew they were coming, and our forces were waiting at optimal locations to intercept them.

At five o’clock in the afternoon, Cony acquired a solid sonar contact. It was B-59, a Soviet Foxtrot-class diesel submarine. B-59’s stress-ridden Capt. Vitali Savitsky feared he was under attack and ordered his crew to arm its nuclear torpedo, witnesses aboard B-59 reported.

Those witnesses say Savitsky madly screamed, “Maybe the war has already started up there. We’re going to blast them now! We’ll die, but we will sink them all. We will not disgrace our Navy.”

Savitsky would have been correct. The nuclear device he was about to launch at Cony was a 15 kiloton nuclear weapon, the same size and destructive power of the atom bombs dropped on Hiroshima and Nagasaki to end World War II.

After being detected, Savitsky and his exhausted crew bravely endured four more hours of our pounding the submarine with ultra-high amplitude sound waves from our sonar dome. The sub’s crewmen were dropping like flies. Their air-conditioning equipment was inoperable. Temperatures soared to 140 degrees Fahrenheit.

Finally, B-59 surfaced at nine o’clock that night. When she broached the surface, we bathed her in blue-white light. She turned on her diesels to recharge the batteries. Main deck hatches popped open. The sub’s crewmen streamed out and stripped off their sweat-soaked uniforms.

On Cony, we observed the Russians’ expressions of joy and relief, as we followed alongside about 200 feet off the sub’s starboard beam.

I was the only officer on Cony trained to communicate with the Russian captain. My lead signalman and I used our flashing light to interrogate the submarine by use of the Cyrillic Transliteration Table, the International Signals Book, and Morse Code. I asked the submarine to identify itself.

When I asked for his status, he reported perfunctorily, “On the surface, operating normally.”

As a customary maritime courtesy, I then asked, “Do you require any assistance?”

Savitsky’s answer was a curt “Nyet.”

For the next hour, Savitsky and I just stared at each other in an uneasy standoff.

The light flashes were blinding.

Believing he was under attack, Savitsky wheeled his boat around, bringing his forward torpedo tubes to bear on Cony.

Related: 5 Cold War Mistakes That Nearly Killed Us All »

Cdr. William Morgan, Cony’s captain, directed me to apologize for the P2V’s aggressive behavior. Savitsky acknowledged my apology and closed his torpedo-tube doors. He wheeled to port and returned to his easterly heading. I was greatly relieved not to be staring down the barrel of B-59’s torpedo tubes.

When things settled down, Morgan gave me my standing orders in the language of a sailor: “Keep that Russian bastard happy.”

I did just that. I nodded my thanks for Savitsky’s patience. The Russian even nodded back. Our relationship appeared slightly more cordial.

Then Savitsky signaled that his crew could use some fresh bread and cigarettes after all. I arranged for a large parcel of freshly baked bread and American cigarettes to be transferred to the submarine by high-line.

Sativsky’s crew retrieved the parcel. He nodded his thanks to me as he chugged slowly north toward Russia. As he recharged his batteries, Cony followed along. Savitsky and I exchanged cordial nods and even a small smile or two.

Well after midnight, Morgan ordered me to call it a night. After a respectful salute to Savitsky, I retired to my stateroom.

The next morning, I saw B-59being escorted away by another destroyer from our squadron. By the following day, B-59 had submerged and managed to lose her escort.

All crew members were sworn to secrecy about the entire B-59 incident. While we didn’t know why, we took our vows of silence seriously. For the next 40 years, I never told anyone about this incident.

After the collapse of the Soviet Union in 1991, documents relating to the B-59incident were acquired by Peter Huchthausen, author of “October Fury.” At the time, he was serving as naval attaché in the American Embassy in Moscow.

When he learned from these documents just how close Cony came to being sunk by a Soviet nuclear torpedo, he contacted me to record the Cony story. I still had no idea that I had faced off with a mad Russian armed with a nuclear torpedo.

In 2002, on the 40th anniversary of Black Saturday, “October Fury” was published. When I read it, I realized just how close we had come to an all-out nuclear exchange between the Soviets and the United States and my role in preventing that exchange.

Suddenly I was overwhelmed with requests for radio and television interviews. I participated in the making of two documentary films to celebrate the 50th anniversary of the Cuban missile crisis in 2012. One was Bedlam Productions’ “The Man Who Saved the World.” The other was the BBC production titled “The Silent War.” I am relieved that my shipmates and I were finally recognized for our service during those dangerous times.

Gary Slaughter is the author of the award-winning Cottonwood series. Slaughter served as a naval officer for seven years after graduating from the University of Michigan. After establishing a distinguished business career in corporate information technology, he decided to put his career on hold to write his first novel, Cottonwood Summer. Slaughter’s latest book, “Sea Stories: A Memoir of a Naval Officer (1956-1967),” brings to life 60 vignettes of his time as a Cold War naval officer. He and his wife, Joanne, live in Nashville, Tennessee.