A Russian nuclear accident has killed at least 7 people. What happened remains a state secret

"First and foremost, we offer our deepest condolences to those families who lost loved ones in this recent explosion,"  said Air Force Lt. Col. Carla Gleason, a Pentagon spokeswoman. "It is certainly a tragedy. Beyond that, I would refer you to Russia for information on this disaster." 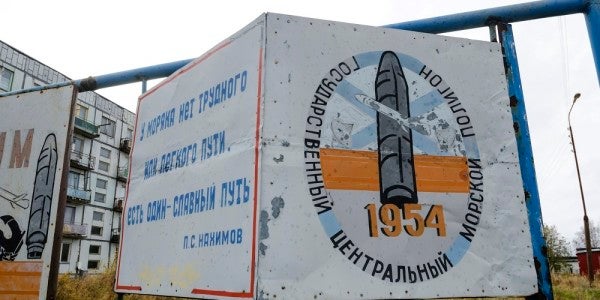 It's been more than a week since a mysterious Russian nuclear accident roughly 600 miles north of Moscow and only the Kremlin and those killed know what happened.

What is known is something exploded on Aug. 8 at a naval weapons testing range near the village of Nyonoksa. The Russian government's official account of the accident has changed several times since then, but the country's weather agency recently confirmed that radiation levels jumped to 16 times greater than normal after the blast.

U.S. media outlets have reported that a nuclear-powered cruise missile named the SSX-C-9 Skyfall likely exploded during testing. President Donald Trump appeared to confirm as much when he tweeted on Aug. 12 that the United States had gleaned useful information from “the failed missile explosion in Russia.”

“We have similar, though more advanced, technology,” the president tweeted. “The Russian 'Skyfall' explosion has people worried about the air around the facility, and far beyond. Not good!”

The U.S. government experimented with nuclear-powered cruise missiles in the 1960s but gave up on the technology, said Hans Kristensen, director of the Nuclear Information Project at the Federation of American Scientists.

“It was too difficult, too dangerous, and too expensive,” Kristensen, said on Friday. “But of course, since then a lot of technology has developed. It could be some of what the Russian technicians are taking advantage of, but so far it seems like they're not doing a good job.”

Norway has detected low levels of radioactive iodine near its border with Russia, said Ed Lyman, of the Union of Concerned Scientists. It's not known if that iodine was a result of the accident or medical isotope production plants.

“If radioactive iodine is associated with the accident, it would indicate that there was a nuclear reactor operating generating fission products,” Lyman told Task & Purpose. “The alternative theory is this some sort of rocket that did not use a critical nuclear reactor for power but used, let's say, a radioactive isotope source to generate heat.”

But with so little concrete information available about what radionuclides were released by the explosion, it is impossible to know if the Russians were testing a cruise missile or some other system, Lyman said.

The Russians – and Soviets before them – have had a “mixed” safety record when it comes to civil and military nuclear reactors, Lyman said.

At least seven people were killed because of the accident and at least 10 medical workers who treated victims of the blast have reportedly been flown to Moscow, where they are being treated at the Federal Medical and Biophysical Center, which specializes in treating radiation illnesses. (Victims of the 1986 Chernobyl accident were treated in a Moscow facility called Hospital No. 6.)

The Russians also announced that the village of Severodvinsk – roughly 30 miles from the accident – would be evacuated, only to reverse course later and announce the evacuation was cancelled.

“It looks like there's a fairly modest increase in the dose rates in the towns downwind of the accident but it did not persist,” Lyman said. “But there's still been no reporting about dose rates in the areas closer to the actual release. So that's still a mystery.”

Despite tensions with the Russian government, U.S. officials are empathetic about the victims of this latest catastrophe.

“First and foremost, we offer our deepest condolences to those families who lost loved ones in this recent explosion,” Air Force Lt. Col. Carla Gleason, a Pentagon spokeswoman, said on Friday. “It is certainly a tragedy. Beyond that, I would refer you to Russia for information on this disaster.”

A Russian government spokesman could not be reached for comment.

Normally these columns are meant to be slightly humorous, but there's not a single thing funny about a nuclear accident. Your friendly narrator's father was part of the Philadelphia Inquirer's Pulitzer Prize winning coverage of the 1979 Three Mile Island nuclear accident in Harrisburg. No one was killed, but three years later Dad was diagnosed with Leukemia, which killed him in 2007. (Are the two events linked? It's highly doubtful but we'll never know.)

If you want to know what hell looks like, it's a hospital room in Philadelphia. God help the Russians in Moscow being treated for radiation poisoning.