It may not be as scary as it sounds. 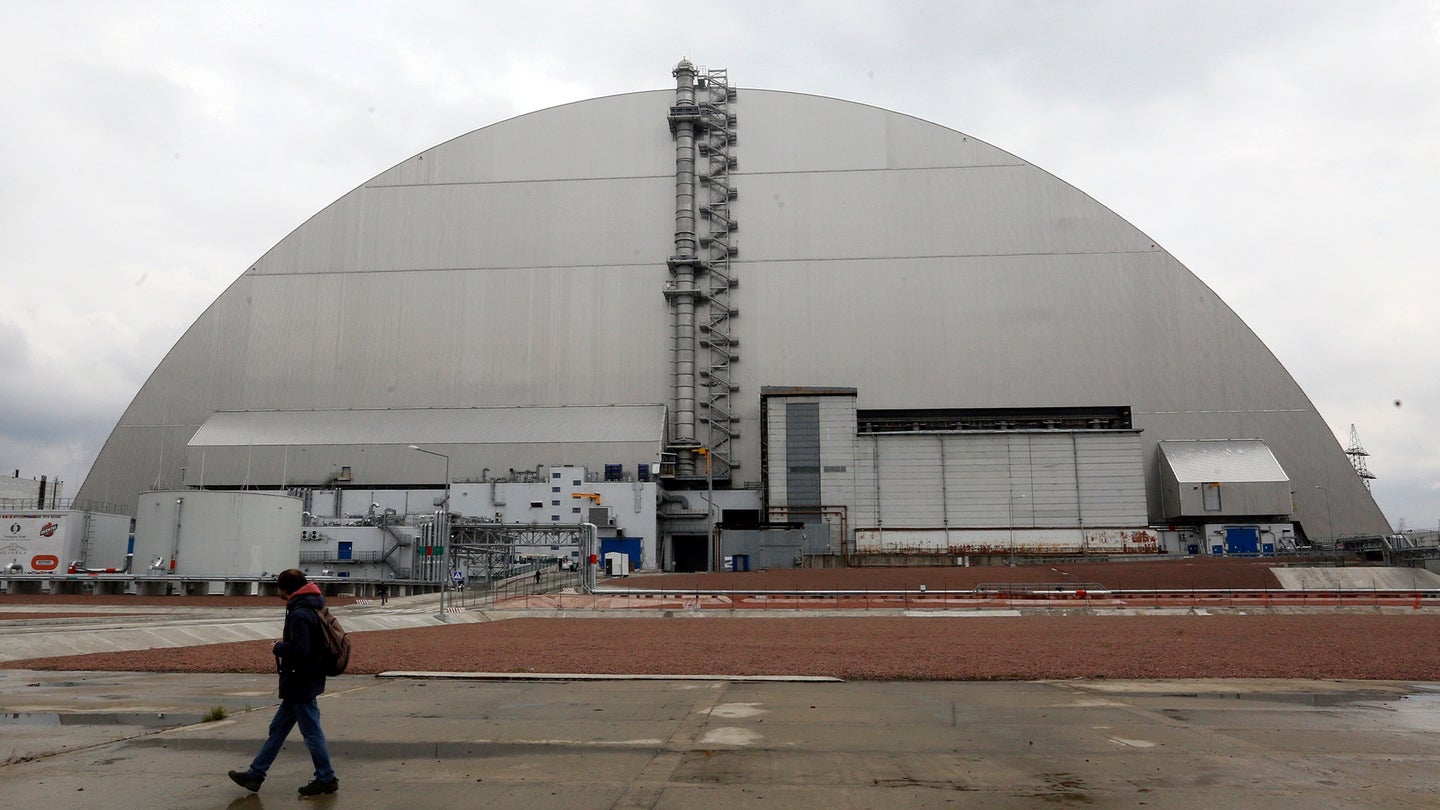 A man walks past a shelter covering the exploded reactor at the Chernobyl nuclear plant, in Chernobyl, Ukraine, Thursday, April 15, 2021. The vast and empty Chernobyl Exclusion Zone around the site of the worldâ€™s worst nuclear accident is a baleful monument to human mistakes. Yet 35 years after a power plant reactor exploded, Ukrainians also look to it for inspiration, solace and income. (AP Photo/Efrem Lukatsky).
SHARE

The recent fighting at the Chernobyl power plant may not have been as dangerous to Russian and Ukrainian troops as a battle in the middle of a nuclear wasteland might sound.

On Thursday, Ukrainian officials announced that Russian forces had captured the former Chernobyl nuclear power plant, the scene of the disastrous 1986 meltdown that scattered nuclear waste into Europe and left areas of what is now northern Ukraine uninhabited to this day.

Fighting in a partially radiated environment can present a great degree of risk and it is a scenario that troops don’t often train for. While the extent of fighting remains unknown, it is perhaps the most high-profile instance of combat in such an environment that’s ever been seen.

“The biggest danger is that you can’t see it,” said one Army soldier with 17 years of experience as a Chemical, Biological, Radiological and Nuclear specialist. “If radioactive material is collected it can cause drastic issues with logistics and medical care.”

There are three types of radiation, alpha, beta and gamma, ranging from least to most penetrating. Alpha can be stopped by paper or normal clothing. Beta and gamma radiations pose the greatest threat, which is what the military’s Mission Oriented Protective Posture (MOPP) gear is protect against by preventing irradiated material from being inhaled or coming into contact with the skin. Beta and Gamma rays will remain in the soil and water for decades at varying levels, meaning combat in the terrain around Chernobyl could dig up and dissipate contaminated material into the air. The extent that this would pose a real health risk to the troops involved depends on their level of protection.

“The average Russian soldier probably isn’t at great risk if they are in the correct protective posture,” said an Army chemical officer who has served as a recon platoon leader and hazard response company commander of military units trained to deal with chemical, biological, radioactive, and nuclear (CBRN) threats. “There is a level of radiation in the ground around there, but it’s a matter of risk.”

Ground combat and maneuvering armored vehicles will turn over the soil and expose radiated material, but most likely not to the extent that it would disable personnel and units.

“Staying inside armored vehicles and using proper filtration systems should keep that level of radiation away,” said the CBRN officer.

The greatest risk for radiation exposure would be combat directly in and around the enclosed reactor. The facility is enclosed in heavily reinforced concrete and steel — the so-called “sarcophagus” — and it would likely take a direct artillery attack to cause a breach, something both Ukraine and Russia are certainly aware of.

Dealing with casualties and decontamination also present complications in such an environment. Casualties will require special treatment and need to be isolated.

From a decontamination perspective, the area around Chernobyl may not present that great of an obstacle.

“For that environment, you’re going to slosh down the vehicle, just remove the dirt and mud and brush off anything you can,” said the CBRN officer.

“Russian troops are going to know about this, it’s in their backyard,” said another CBRN soldier. “It’s just a matter of having those decon units ready to go and set up sites. Tents, water, dosimeters.”

In the spring of 1986, reactor 4 at the Chernobyl power plant exploded, marking the start of the worst nuclear accident in world history. The official death toll from the accident is 31 people, but thousands of Soviets were involved in frantic efforts to stop a second and far more powerful explosion at the power plant and then clear contaminated areas.

The nearby village of Pripyat was belatedly evacuated three days after the explosion and both Ukraine and Belarus cordoned off an area around the power plant where people were not allowed to live. In Ukraine, that area is known as the exclusion zone.

Prior to Russia’s most recent invasion of Ukraine, commercially available satellite imagery revealed that a new bridge had been constructed across the Pripyat River in Belarus, inside the evacuated zone. It is now clear that Chernobyl was in the path of the Russian attack, perhaps because it lies along the shortest direct route from Belarus to Kyiv, Ukraine’s capital.

The region is about 80 miles north of Kyiv, and just 12 miles from the border with Belarus, along one of the three routes Russian military forces have used to advance into Ukraine, a senior defense official said.

Ukrainian President Vladimir Zelensky announced Thursday morning that Russian forces were trying to seize the area and that “Our defenders are giving their lives so that the tragedy of 1986 will not be repeated.”

By the afternoon, Ukrainian Prime Minister Denys Shmyal said in a televised statement that

“The Chernobyl zone — the exclusion zone — and all installations of the Chernobyl nuclear power plant have been taken under control of Russian armed groups.”

Throughout the day, reports of fighting in and around the Chernobyl Exclusion Zone have trickled in. Video showed Russian mechanized vehicles on the grounds of the former power plant. Mikhail Podolyak, an advisor to Zelensky, said that “It is impossible to say the Chernobyl nuclear power plant is safe after a totally pointless attack by the Russians,” according to Reuters, adding that, “This is one of the most serious threats in Europe today.”

A senior defense official said Thursday that the U.S. military believes Russian forces had moved through the Chernobyl area but the official could not confirm media reports of fighting around the nuclear power plant or whether the Russians had captured it.

Speaking to reporters at the Pentagon, the official had no information about whether Russian troops took any safety precautions while operating in radioactive areas, nor did the official address whether radiation levels at Chernobyl have risen as a result of the Russians’ actions, possibly endangering U.S. troops elsewhere in Europe.

The name “Chernobyl” conjures certain terrifying images, but it is important to note that for now, the danger to the actual facility is unknown, and any combat in the area, while adding an element of danger, is not fighting in a nuclear wasteland. The latest reports from Ukraine’s nuclear agency and interior ministry Friday reported increased radiation levels, but they were not described as “critical.”

In fact, the greater threat might come from the 15 nuclear reactors spread out across four locations in the country, which are less secure against military conflict.

“That’s 15 reactors that are not designed to be shot at,” said one CBRN officer.