What really happened the night of the Chernobyl disaster, according to a new Army podcast 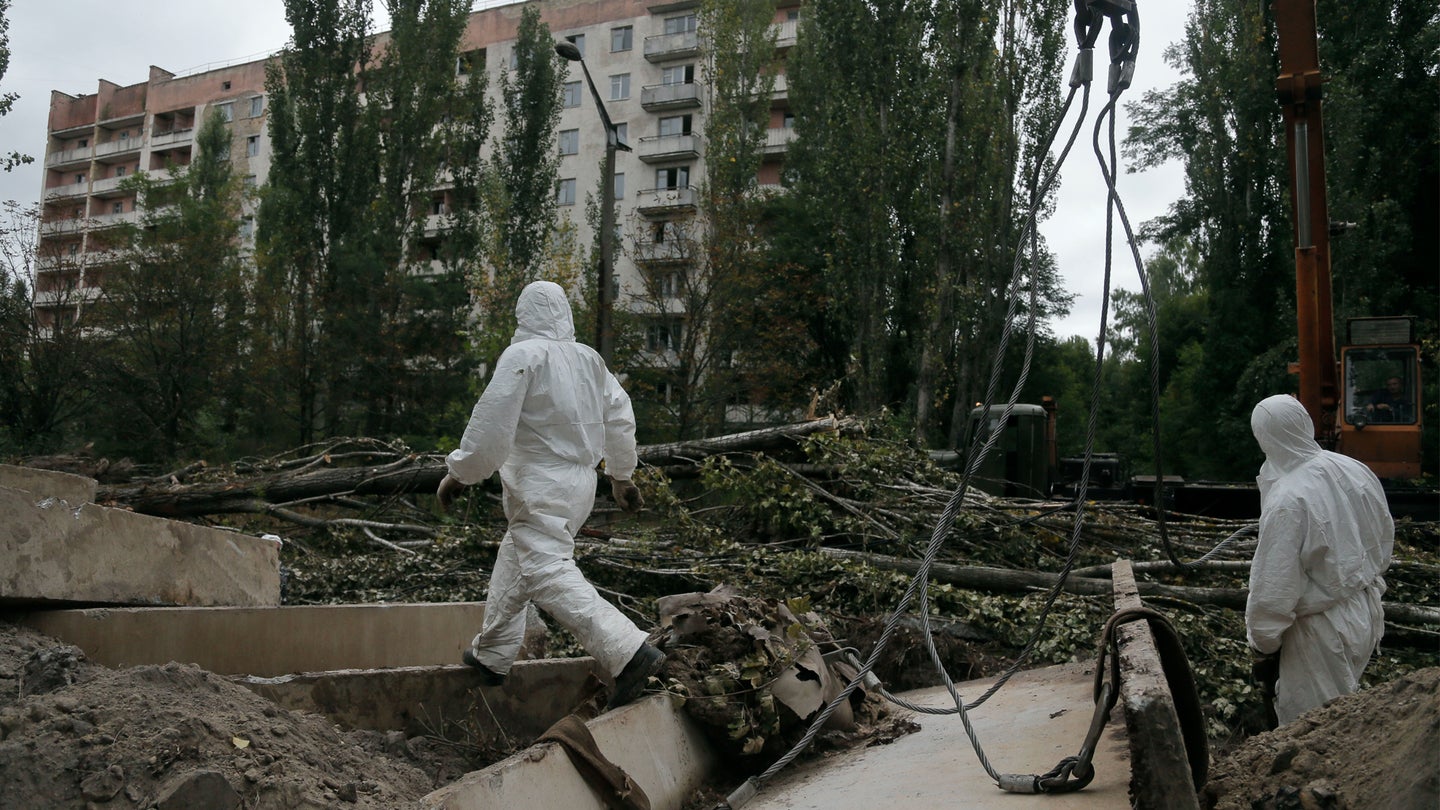 Workers patrol the dead town of Prypyat three kilometers from the Chernobyl nuclear power plant, as dismantling work continues at the scene of the world's worst nuclear accident, in Ukraine, on Sunday, Aug. 25, 2013.
SHARE

It’s been almost 35 years since the Chernobyl disaster, and we know now that it was the culmination of a series of missteps and failures that built up over the years, compounding with human error and relentless secrecy from authorities.

“There were design flaws, there were decades of ignored warnings of minor failures and discovered flaws, there was human error on the night of the accident itself, and then there was the secrecy that, you know, ran through everything in the Soviet Union and the atomic industry, in particular, that complicated and exacerbated all of the foregoing three problems,” says Adam Higginbotham, a journalist and author of Midnight in Chernobyl, on an upcoming podcast created by the U.S. Army’s 18th Airborne Corps.

“And it was this chain of events that really went back 10 to 20 years that ultimately resulted in the accident on April 26th,” he said. On that day in 1986, a reactor at the Chernobyl nuclear power plant in Ukraine exploded, releasing huge amounts of radioactive materials into the air and leading to the worst nuclear accident in history.

Higginbotham recently joined Army Col. Joe Buccino for an episode of the Corps’ podcast, The Doomsday Clock, to pull back the curtain on the Chernobyl disaster — which he spent years researching in order to piece together a full picture of what went wrong. The episode will be released on Tuesday, Feb. 16.

While he originally intended to “reconstruct the events of the night of the disaster itself,” Higginbotham said he realized after talking to eyewitnesses that there was a lot he didn’t understand, and there were “huge parts of it” that had been either totally left out or inaccurately reported. There are even some points of the HBO miniseries “Chernobyl” that misrepresent facts surrounding the explosion, as Higginbotham explains.

“It was only when I began reporting this that I realized the extent to which, you know, however much Soviet citizens’ view of the West was colored by Soviet propaganda … the same was true to some extent of people like me, who had grown up in the West during the Cold War,” he said. “And we were, you know, raised to imaging Soviet citizens as the kind of mindless automatons marching in lockstep toward a grim future.”

Part of that was due to the resources the people living near the nuclear plant had. The city of Pripyat had “special budgetary allocations that freed up resources,” Higginbotham explained, which was a deliberate method of attracting talent, as the quality of life there was higher than elsewhere in the Soviet Union.

Throughout the podcast, Higginbotham walks listeners through what went wrong, who was responsible, how it was handled, and where we are now. He describes how one man was ultimately responsible for alerting the rest of the world outside the Soviet Union that something had gone wrong — a man named Cliff Robinson who was working at a testing laboratory in a nuclear power station in Sweden on April 28.

When Robinson entered the plant that morning, he “set off one of the radiation detectors at the entrance of the building,” Higginbotham explained. He was confused but ultimately went about his day, believing the equipment was malfunctioning.

Only later he realized that a line of workers who were entering the plant were all setting off that same radiation detector. Robinson tested one of the workers’ shoes.

“What he discovered is that the sole of this guy’s shoe had a whole series of radioactive elements in whatever was on the bottom, that he eventually induced had come from a nuclear reactor — but not one like the one where he worked at Forsmark,” Higginbotham said.

It wasn’t long before Swedish authorities pieced together what they believed was happening: contamination of some kind had drifted over to Sweden from an exposed nuclear reactor inside the Soviet Union. While Swedish diplomats questioned authorities in Moscow, Higginbotham said, Moscow authorities continued to deny that anything was wrong.

The Chernobyl disaster was recently the subject of an HBO miniseries, for which Higginbotham’s book was one of the sources the show’s creators consulted. But the series isn’t completely accurate in how it portrays some of the events surrounding the explosion.

A dramatic trial taking place in the aftermath of the tragedy was not as public as it appeared on HBO. Higginbotham said that portrayal is “Soviet framing of what happened,” when in reality the trial was not nearly as accessible to the public. And while the press was invited to the trial, they were only really invited to cover opening statements.

“All of the rest of the trial was held in closed session,” Higginbotham said. “And we only know the testimony that was given those days because there were people from the plant who they couldn’t keep out of the proceedings, who went and in secret, took shorthand notes.”

Today, the exclusion zone — a 1,000 square mile area around the Chernobyl site — has become a relatively busy tourist attraction. Visitors can be exposed to radiation during the visit, according to the International Atomic Energy Agency, though at tolerable levels during a limited period of time. While he hasn’t visited in a few years, Higginbotham says you’d likely see “one bus full of tourists after another arrive and kind of make the rounds” if you stand in the central square for a few hours.

The area has seen an influx of animals and plants who have returned and seem to have “triumphed.” Higginbotham said the city of Pripyat is “overgrown” with different plants and trees, sprouting the cement and inside buildings. Visitors could see moose “wandering through the central square,” and there are different kinds of foxes and birds that “haven’t been seen in Ukraine in years.”

“It is actually, especially if you visit in the summer, it’s sort of wonderful,” he said. “It’s a quite spooky place to be, it’s sort of amazingly silent and impressive in the way nature has claimed the place back.”

It’s made even more interesting because the architecture of the buildings is exactly like it was in 1986, describing it as “a sort of Soviet Pompei.” But it can also be a bit unnerving to visit, especially when you’re with a small group.

“I’d been there when it would just be me and my translator and the guide who was taking us around … So you would be, you know, one of only three people in an entire city,” Higginbotham said. “And that could be a quite unnerving experience because you do get a sense of, especially if your friends disappear around a corner for 10 minutes, you get a real sense of what it’s like to be the last person on Earth.”

You can listen to the full episode on Tuesday, Feb. 17 here.