The Axis is Evil is out, and the Wolf Pack of Rogue States is so, so in. 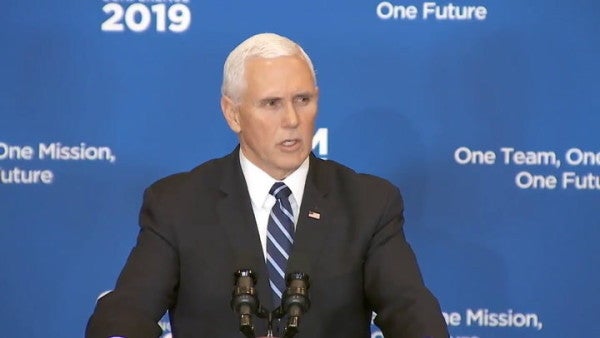 Oh, honey, that Axis of Evil getup is so 2002. You need to get with the times and try on this little number called a Wolf Pack of Rogue States, designed by Mike Pence.

Yes, the Axis is Evil is out, and the Wolf Pack of Rogue States is so, so in.

The vice president mentioned the latest and greatest phrase to describe anti-American super-villain states during a conference in Washington on Wednesday, and clearly, they must all be running around the desert together looking for strippers and cocaine.

“Beyond our global competitors, the United States faces a wolf pack of rogue states. No shared ideology or objective unites our competitors and adversaries except this one: They seek to overturn the international order that the United States has upheld for more that half a century.”

According to Pence, the Wolf Pack includes Iran, North Korea, Cuba, Nicaragua, and Venezuela. Notably absent: China and Russia, the two states that actually have a shot at seeking “to overturn the international order.”

As Daniel Larison notes at The American Conservative, the Wolf Pack crowd's “ability to 'overturn the international order' is practically nil, and it isn't even certain that most of them desire that outcome. If North Korea, Iran, Cuba, Venezuela, and Nicaragua are our main adversaries, we are as secure as can be and we have very little to worry about.”

Still to come: the Cabal of Crazies, Circle of Scoundrels, League of Extraordinary Villains. https://t.co/5e8UvIyNBt

Pence's wolf pack phrase follows another tried by National Security Advisor John Bolton back in November, when he labeled Cuba, Venezuela, and Nicaragua as a “troika of tyranny” and a “triangle of terror,” which make for interesting death metal band names, but seem kind of lame in comparison to the infamous 2002 “Axis of Evil” phrase from David Frum.

But perhaps they can consult with Stitch Jones, the Ayatollah of Rock-and-rolla, for some better branding.