What’s in the news? Oh, nothing special, just “America’s most secret attack sub ever” heading for her homeport on Sept.... 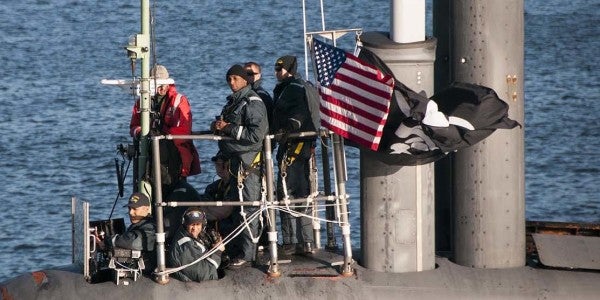 What’s in the news? Oh, nothing special, just “America’s most secret attack sub ever” heading for her homeport on Sept. 11, flying pirate colors beside the national ensign. And everybody’s got theories on why this secret-squirrel submarine has gone all Captain Jack Sparrow.

Here’s the background: USS Jimmy Carter (SSN-23) is the latest in the Navy’s Seawolf class of submarines, and also the longest by 100 feet — to give it space for 50 special operations forces, SEAL delivery vehicles, drones, and a bunch of other shady stuff we’re not at liberty to discuss here.

One piece of gear they had space for: the unmistakeable, black skull-and-crossbones Jolly Roger flag that ended up on their rig as they steamed for home in the channel outside Naval Base Kitsap in Bangor, Washington.

Big deal. A flag. So what? Well, as Washington Post reporter and Marine vet Thomas Gibbons-Neff noted yesterday, there’s a quirky bubblehead history behind that particular flag — enough to suggest that, while it was out in the briny deep, the Carter did… something devious to someone. Let me explain.

Back in the early days of submarine warfare, the undersea platform wasn’t considered a gentlemanly way to fight. Who hides out like a coward and picks off surface ships with surprise and abandon? Pirates, that’s who. “Underwater weapons, they call ’em,” Rear Adm. Sir Arthur Wilson, the Royal Navy controller, said in 1901. “I call them underhanded, unfair and damned un-English.”

Wilson continued, in a way that only huffy admirals can: “I’m going to get the First Lord to announce that we intend to treat all submarines as pirate vessels in wartime and that we’ll hang all the crews.”

You can imagine that sentiments like Wilson’s weren’t great for morale among British sub crews. But when the first English sub scored a kill in World War I — HMS E9 sunk a German cruiser with two torpedoes — the captain, Lt. Cmdr. Max Horton, ordered the Jolly Roger to be flown from the sub’s periscope as it rode triumphantly into port in Essex.

Much to the British admiralty’s chagrin, an ironic tradition was born. Victorious sub crews began to advertise their prowess with a skull-and-bones banner. By World War II, the pirate flag was accepted in the U.K. fleet as a semi-official battle color. “Submariners’ lives were harsh then and about a third of them died. But veterans say their hearts always soared when they ran up a Jolly Roger,” Sarah Fletcher, a former Navy News magazine editor, told The Mirror in a 2014 history of the practice.

Flags are nice. Cakes are nicer!British Ministry of Defence

The U.S. Navy has its Jolly Roger traditions, too — from the famously named 103rd Fighter Squadron, to its shellback ceremonies, to the USS Kidd’s longtime authorization to fly the flag (yes, Captain William Kidd was a famous pirate, but that’s not who the U.S. ship is named for). But what’s the skull and bones doing on the sail of the Carter? Probably celebrating a big ol’ deployment triumph, but not the sort we may ever know about.

Dubbed “the Navy’s most shadowy spy,” the attack boat is rigged with a special “multi mission platform” to carry special operators, unmanned vehicles, and god knows what else. Even its unit citations are vague, presumably to protect details of its dark ops. Naval experts are pretty sure the Carter’s run unmanned aerial surveillance of North Korean artillery ops in recent years, for example.

In other words: The operational possibilities suggested by that Jolly Roger are numerous and fantastical. The Post’s Gibbons-Neff explains:

While it’s unlikely the Carter torpedoed an enemy ship or fired one of its cruise missiles, the flag could represent the success of a more covert mission. The Carter can insert commandos, deploy unmanned submersible vehicles, and likely splice undersea cables all while using specially outfitted thrusters to almost hover off the seafloor. One of the Seawolf class’s namesake participated in the Cold War-era operation Ivy Bells that saw U.S. submarines tapping Soviet underwater communication lines.

You might not expect piratical derring-do from a boat named for a bleeding-heart peanut-farmer president. But maybe you should. In the meantime, we’ve reached out to the Chief of Naval Information to see if the service can shed any light on Carter’s bandit-banner, and will update if we get any new intel.