October 1 marks a sad day for the Army’s classic gray IPFU uniforms as the branch moves on to sleeker... 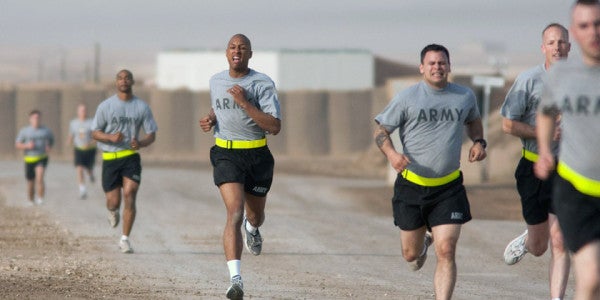 October 1 marks a sad day for the Army’s classic gray IPFU uniforms as the branch moves on to sleeker option: the Army Physical Fitness Uniform. By that date, the new, darker duds will be the Army-wide standard and required gear for all soldiers.

The switch is a big deal: The APFU makes 32 alterations from the old uniform, including “improved identification/key pockets, a redesigned stretchable lining in the trunks, heat mitigation and female sizing.” The new digs are black with gold text, and the clothing is no longer a simple cotton, but a quick-drying breathable “high-performance” fabric. And did we mention the shorts have usable pockets? Seriously, pockets. Ours is the greatest military force in the history of earth.

“Soldiers' feedback prompted the development of the APFU,” according to an ALARACT memo to soldiers in Sept. 2014. “To gauge accurately the soldiers' opinions, the army conducted an online survey.”

That questionnaire garnered more than 76,000 soldier responses, revealing that they wanted modifications to the outfit’s appearance, as well as “the addition of high-performance fabrics, and measures to increase comfort and fit.” (There’s no word yet on when, or if, Forever 21 will be making shitty knockoffs of these new APFU shirts, the way they did with the gray ones.)

While the much-anticipated change has been received well by most of the Army, some soldiers are still waxing nostalgic about the old gray PT uniforms, according to a recent Army news release.

“Sgt. Christopher Davis Garland, from Company C, 742nd Military Intelligence Battalion, said he likes the overall look and feel of the new uniform and is supportive of the switch, but will miss the cottony feel of the grey reflective shirt,” says an Army release about the APFU.

One sergeant quoted in the release said he’d miss the “cottony feel” of the old gray reflective shirt.

He said the retired gear would probably still get a lot of play in his wardrobe, you know, “when doing yardwork.”