It’s Time For Us To Stop Making Up Uniform Regulations

“Hey there, Debbildawg! Why’s your t-shirt hangin’ out!” Many a Marine, soldier, sailor, or airman has heard similar words about... 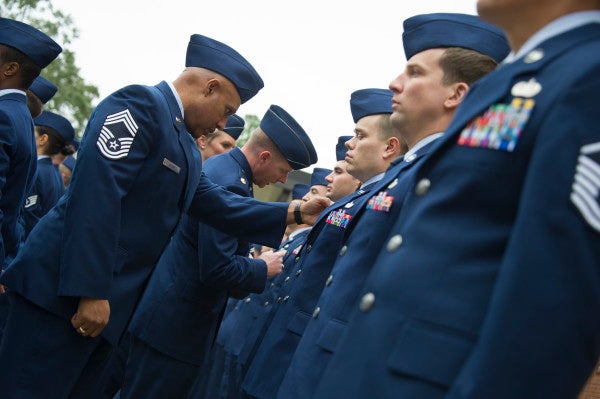 “Hey there, Debbildawg! Why’s your t-shirt hangin’ out!”

Many a Marine, soldier, sailor, or airman has heard similar words about a uniform issue from; well, let’s be honest; probably a sergeant major or chief.

The military has enough rules without making up new ones. For example, my service, the Marine Corps, has several rules that exist only in the minds of senior leaders.

In the Marine Corps, there’s no requirement listed in the uniform regulations to tuck one’s t-shirt in while wearing the physical training uniform, unless the local commander requires it. Try going untucked in the company of a staff sergeant or higher, though, and you will feel their wrath, be that an ass-chewing for enlisted, or eyeball lasers that could burn through titanium for officers.

The same applies for putting things in pockets. Now, obviously one has to use common sense. Even if the rules don’t say something explicitly, you still have to look respectable. Even in the civilian world, people will look askance at you if you keep a utility belt’s worth of items in the pockets of your dress trousers.

But, wallets, cellphones, and keys are supposed to go in pockets. That’s what pockets are for. If you listen to some leaders, you’re supposed to stick your personal items in your sock. No, really, your sock. Because having your wallet bulge in your back pocket is unprofessional, but doing a calf striptease at the PX check-out is perfectly normal.

While we’re discussing that, no service has a written requirement to wear shirt stays or patent leather shoes, yet that’s become the standard. If you want to have a long day at work, try to show up at some units with a low-regulation haircut. Servicemembers are often stuck in a uniform arms race, trying to out square-away each other, even though there’s no actual rule telling them to. These “rules” are in no regulation, yet everyone comes to believe they’re required. Why do we create imaginary rules when we already have plenty of actual ones?

At least permanent press camouflage uniforms have eliminated at least a little stupidity — I remember when I joined, I was told to iron Elmer’s Glue inside the creases of my “combat” utility uniform to get a crease that you could cut your finger on. Even with the new “no-iron” uniforms, though, sometimes leaders bring back the stupid by turning them into de facto dress uniforms again. Today a servicemember could obey every line of his or her service’s uniform regulations and yet fail a uniform inspection, solely on unwritten rules.

That’s bizarre. Truth be told, though, look at any picture or service members from the 1960s or earlier. Just look at their haircuts alone, if nothing else. How many of them would survive first contact with a sergeant major or chief today?

At the same time, who are the soldiers, sailors, airmen, and Marines we’re told to remember and look up to? They’re the “Old Corps,” “Old Army,” or whatever other name, but universally “old” is regarded as a synonym for “better,” be that in uniforms or anything else.

Maybe they really were better and maybe they weren’t, but the point is that adherence to imaginary rules isn’t what made the difference. Performance in battle did. Rules are rules, not personal preferences. One’s motivation is not inversely proportional to hair length. If one needs proof of that, just look at the official photos of Medal of Honor recipients prior to Vietnam to see glorious examples of moustaches, Brylcreemed hair, and cocked covers.

Making up rules, whether in uniform regulations or in conduct, only breeds disrespect for the idea of rules in general. You want to know why your people gaff off the important stuff? It’s because they’ve been harassed so often on imaginary violations they don’t know the difference.

By all means, insist on professionalism from your people. Uphold high standards. But, you need to pick your battles. You can and should strictly enforce rules. Good order and discipline depend on it. Just make sure they’re actually rules, not just your personal preferences.