6 Poses Every Soldier Needs To Master In The Army

Editor’s Note: A version of this article originally appeared on the blog of Angry Staff Officer. Shakespeare apparently once said... 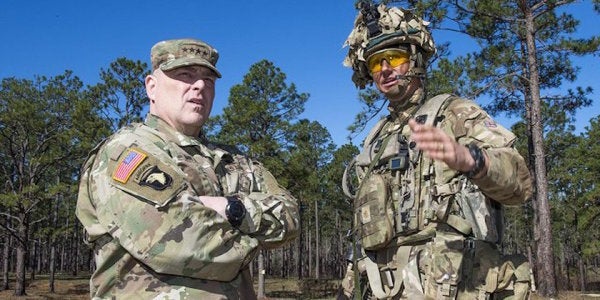 Shakespeare apparently once said that, “Clothes make the man.” Well, in the Army, we all have to wear pretty much the same thing: colorful pajamas. And there’s not much you can do to accessorize — barring our hair, but that’s another story entirely. Which leaves us only a few ways to express the individuality that we have managed to preserve despite the Army’s best efforts to crush it out of us.

One of the ways we can demonstrate this is how we stand. Consciously or not, everyone displays their personality by their stance. Observe a group of leaders watching training or soldiers attending a briefing and you will see a whole multitude of subconscious attitudes on display. You can learn a lot about a soldier’s personality just by watching the stances. There are six key stances that you will see.

This is most commonly seen from those in command. Feet spread apart, arms crossed, the whole body radiating, “I am in control, I have no emotions, and don’t even think about approaching me to discuss your measly little problems.” This is prevalent among captains in command, lieutenant colonels, colonels, sergeants major, first sergeants, and drill sergeants. Sometimes you’ll even get a whole group of power standers together, vying to see who can look the least approachable. The power stance is perfectly paired with some overpriced Oakley sunglasses and it easily transitions into a knife hand stab.

Since the Army says that our pockets are off limits to any part of the body, we’ve taken to a modified position of hands in pockets. The most popular is the belt grip. Assume a wide stance and grab your belt just outside the belt buckle. This is another type of power stance, but more suitable for sergeants, staff sergeants, and sergeants first class. It presents a slightly more approachable demeanor that is also well adapted for leaning forward, spitting, and delivering some choice words on a soldier’s performance during training. It is also handy for keeping one’s hands warm in cold weather, since gloves are for wimps.

A modified version of the belt grip is the “thumbs in the waistband of the trousers at the hip” stance. This is the preferred version for those soldiers who really wish to use their pockets but are trying to set a good example in case sergeant major comes by. This is most often seen in junior officers who are struggling with their competing wishes to be cool but also toe the line. These soldiers want to show that they are approachable and are listening attentively, i.e., that they still even care.

There’s something about the simple act of placing hands on hips that radiates the essence of, “Come at me bro.” This is essentially the most combative of all Army stances. Like the U.S. Army itself, it projects power, confidence, and leadership. Which can be a bit of a problem when the projector has neither power nor confidence nor leadership. Thus, when a private first class attempts to place hands on hips, an NCO will usually catch them in the act and berate them forcefully.

There are soldiers who just cannot get out of basic training mindset, no matter how hard they try. They are usually privates, who exist in a constant state of confusion and move around with a look on their face that reflects their internal chaos. Upon being interrupted in their attempts to place one foot in front of the other while also trying to remember every word of what their sergeant just told them while also worrying that they might be in trouble, they will default straight to parade rest, no matter who addresses them. They can be seen furtively shifting about at perennial parade rest, guiltily moving their hands, even though they are in the field among their peers. PRR wears off over time as privates advance in rank and confidence. This stance is a source of amusement for all NCOs. It is most often paired with a regulation haircut.

There’s a part of every soldier’s subconscious that is at all times preoccupied by the awareness of pockets. Specifically, that we have them, but cannot put our hands in them. With the exception of Sergeant Major of the Army Dan Dailey — who has, through superhuman effort, managed to purge all thoughts of pockets from his mind — every single soldier undergoes this struggle. It reaches metaphysical levels, as soldiers project their hopes and dreams on this unattainable prospect. Why are they there? What is their meaning? Why could the Army, in all its infinite wisdom, provide us these glorious assets with which to keep warm, but not allow us to use them? Is there even a supreme being that governs this universe? What is the meaning of life?

Which leads us to our final — and most heinous — stance: hands in the pockets.

This stance is most often found with first lieutenants and specialists. These ranks share a special bond: they have been found capable enough to be promoted at least once, so therefore the Army must really place a lot of trust in us — I mean, them. If soldiers have deployed, this stance becomes even more prevalent. It is carried out with a sardonic lean, as if to say, “Yeah, I know there are rules, but I have superseded these rules: I am become the rules.” In officers, this stance is most often paired with “officer hair,” or “pilot hair,” both being about the same. Like the stance, the hair presses the three inch limit as prescribed in Department of the Army Pamphlet 670-1.

Gen. Raymond Odierno, with his hands in his pockets.

And speaking of pilots, they treat their hair, their uniforms, their stance, and their pockets as theirs, and theirs alone. For they have broken free from the surly bonds of earth and have touched the face of God.

This article, “The Army Stance: What it Says About You,” was originally published on the blog of Angry Staff Officer.