The Military Keeps Picking Sig Sauer When It Needs It Most

Last month, the U.S. Army finally selected its new sidearm: the Sig Sauer P320. The Sig will be adopted as... 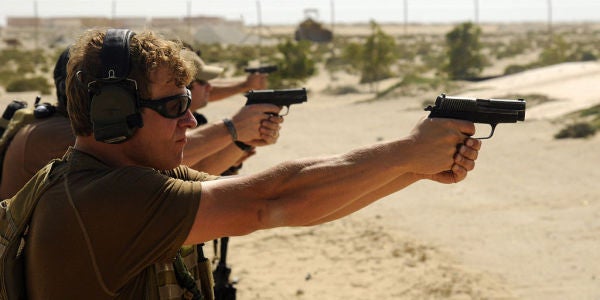 Last month, the U.S. Army finally selected its new sidearm: the Sig Sauer P320. The Sig will be adopted as the M17 and replace the aging Beretta M9. However, the P320 isn't the first Sig pistol to be adopted by the military. In 1992, another, more compact pistol from Sig was adopted as the M11.

After the M9 entered the service in the 1980s, the military quickly realized it needed a more compact pistol for vehicle and aircraft crews, general officers, and military police. As a result, the Compact Pistol Program was launched to find a suitable pistol for branches such as the Army Criminal Investigation Command, which needed a smaller, more concealable weapon.

The Joint Service Small Arms Program, which selected the M9, had seen just two pistol submissions pass its tests: the Beretta 92F and the Sig Sauer P226. The cheaper Beretta won out. The two rivals again submitted weapons with Beretta submitting a more compact version of the M9 and Sig offering the P228. While the Navy had purchased some P228s as early as 1989, the Army's testing began in 1990. By 1992, the Sig had emerged as the winner. During the Army's 15,000-round reliability testing, the P228 suffered only one malfunction; the Compact Pistol Program's specification allowed for 17 potential stoppages.

Like the M9, the M11 chambers 9x19mm and has a frame-mounted decocker safety. It’s also impressive 0.7 inches shorter than the 7.8-inch original requirement, weighs 29 ounces unloaded, and has a magazine capacity of 13 rounds. Sig optimized the M11 for ease of carry, and the pistol has a curved trigger guard.

Today, the M11 is used by units of all branches of the military, including the Air Force where it is frequently issued to air crews and pilots. The Navy currently issues the M11 to the Navy Criminal Investigative Service and explosive ordnance disposal mobile units. The Army's Criminal Investigation Command frequently issues the pistol as does the Air Force Office of Special Investigations. The M11's smaller grip profile makes it easier to handle by operators with smaller hands, making the Sig popular among female officers and service personnel. This is one of the frequent complaints about the M9, which has been addressed by the new M17's modular grip system.

The M11 is not the only Sig Sauer pistol to be used by the military. During the late 1980s, members of the Navy Special Warfare Group were injured when the slides of their M9s failed during firing. This was due to problems with the metallurgy of the Italian-made slides, which cracked and caused the slide to fly off the rear of the gun hitting the operator in the face. As a result, SEAL teams refused to carry the M9, instead opting for the Sig Sauer P226. For over 30 years, the SEALs have refused to use the M9. It remains to be seen what their opinion is of the new M17.

Additionally in 2005, the U.S. Army Tank-automotive and Armaments Command selected the Sig SP2022. 5,000 pistols were purchased for issue to armored vehicle crews. Chambered in 9x19mm, the SP2022 was SIG's first polymer framed pistol. It was also adopted by the Colombian army and French security forces.

The Army's new M17 pistol will replace both the M9 and the M11 in the duty and compact roles; it is believed that the Army had initially ordered as many as 7,000 sub-compact M17 pistols. This is more than enough to replace the approximately 5,000 M11s currently in service. While the M17 has not yet been adopted by the other branches, it is likely to become the primary sidearm of the Navy and Air Force in the near future. While the M9’s replacement may be new, Sig pistols have seen action with the military for the past 30 years.