Want A Combat Job? The Army Has A New PT Test For You

December is the month when you’re supposed to be getting out of shape. But if you plan to either join... 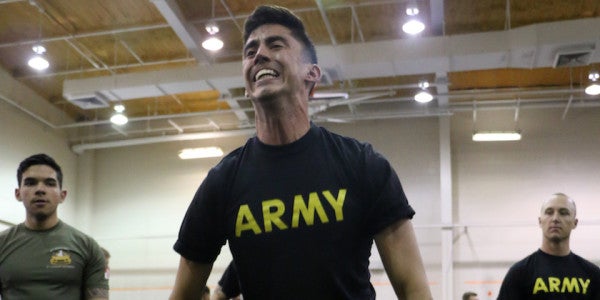 December is the month when you’re supposed to be getting out of shape. But if you plan to either join the Army or reclassify from a “soft” military occupational specialty, like water treatment specialist, to a more physically demanding job, like infantryman, in 2017, you’d better skip the eggnog and reach for the dumbells instead. Because on Jan. 1, the Army is rolling out its all new, top-of-the-line occupational physical assessment test. The OPAT will help determine whether you’ve got what it takes, in your muscles and in your heart and in your balls, to serve on the front lines in the deadliest game known to man: War.

The OPAT, which is not a substitute for the Army Physical Fitness Test, is like track & field day with a CrossFit twist, consisting of four physical fitness tests that together, according to the Army, measure muscular strength, cardiorespiratory endurance, and lower body and upper body explosive power. The tests are standing long jump (self-explanatory), the seated power throw (throwing a medicine ball against a wall while seated), the strength deadlift (a sequence of lifts starting with 120 pounds and working up to 220), and the interval aerobic run, which is basically a timed shuttle run between two points 20 meters apart.

A Cadet in Cadet Initial Entry Training at Fort Knox, Ky., performs the deadlift as a part of the occupational physical assessment test, or OPAT, July 22. This is the first year the assessment has been given to new Cadets in the Reserve Officers' Training Corps program.Army photo by Sgt. 1st Class Brian Hamilton

In an interview with the Army, Dr. Whitfield East, a research physiologist with the U.S. Army Center for Initial Military Training, explained that the idea for an “assessment that would help better place Soldiers into … demanding MOSs” first surfaced in 2012, and is now finally coming to fruition after “two and a half years of extensive research on soldiers performing a large number of events, physical capacity events, and then relating…those against the high physical demand MOS tasks, like putting an 155mm (M109) round in an ammunition rack.” Not coincidentally, the test is being unveiled as female soldiers begin integrating into combat jobs once off-limits to them.

So what does this mean for you? Well, if you’re a civilian and have no intention of ever joining the military, it means absolutely nothing, and why you’re reading this article is totally beyond me. It will also have little or no impact on you or your life if you’re already in the Army and are perfectly content serving in the MOS you already have; although, the Army is considering implementing a “combat readiness” test in the future, which, according to Army Times, would help assess “soldiers’ abilities to meet the demands of their jobs after leaving the training environment,” and draw from the same super scientific research used to develop the OPAT.

Now, if you’re looking to reclassify to one of the dozen or so MOSes that the Army has classified as “highly physically demanding,” most of which are combat arms jobs (i.e., infantry, armor, combat engineer), or if you’re thinking about ringing in the New Year with a trip to the recruiter’s office, here’s what you need to know.

The test is scored not with numbers, but colors (cool!), each representing four different physical demand categories. There is only one scoring scale that applies to both men and women. The categories are as such: heavy (black), significant (gray), moderate (gold), and unprepared (white). Scoring black means that, physically, you qualify for all MOSes. And the job options start to thin out, becoming less physically demanding, the lower you go on the spectrum. Gold is the minimum barrier to entry. White means you’re too weak for the Army and might want to consider a career in accounting. Or the Air Force.

For more information about the OPAT test, click here.