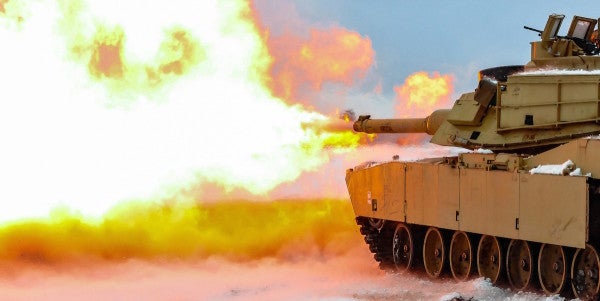 From the Sherman tanks in the Battle of the Bulge to the Abrams tanks in the second Battle of Fallujah, and even the Strykers that carried infantryman during “the surge,” the Army’s armored vehicles have performed valiantly in our nation’s most important operations. Some have argued that armored divisions are no longer necessary in light of the unconventional fight that is status quo for the United States. But with Russia, Iran, and North Korea all making open threats directed at the United States recently, a conventional war in the near future is now a realistic possibility.

The soldiers of the U.S. Army’s armored regiments are widely recognized as second to none in the world, and they demand nothing less from the chariots they must ride into battle. That’s why the Army will be prototyping and testing a next-generation combat vehicle, or NGCV, no later than 2022. According to Defense News, the Army’s Tank Automotive Research, Development and Engineering Center will award a contract to a company within the industry by September this year, and then work with them to develop a prototype over seven years. Although TARDEC was unable to provide Task & Purpose an update on the progress toward a contract this fall, the goal is to have the new NGCV fully fielded by 2035.

As taxpayers, the one thing we must demand of the Army in this latest round of testing is that they get it right this time. The Future Combat System and Ground Combat Vehicle, the ill-fated predecessors to the NGCV, wasted $20 billion and $1 billion respectively before cancellation.

'Cobra King' on Rose Barracks in Vilseck, Germany, today. During the Battle of the Bulge the tank and its crew led an armor an infantry column that relieved the 101st Airborne Division at Bastogne, Belgium.

Developing the NGCV is no small task though. The research and development teams tasked with this job not only have to accommodate the needs of our current conflicts, but also predict the needs that may arise in future conflicts. A combat vehicle of this nature must be able to accomplish the mission for decades to come, which means it must take into account technologies that may be available in the coming years. The engineers have their work cut out for them.

Task & Purpose spoke to representatives from the U.S. Army Brotherhood of Tankers, a nonprofit organization dedicated to preserving and publicizing the history of Army armored forces, about what will be necessary if developers want to get the NGCV right. As experienced soldiers from the armored divisions, they offered a five key areas that need to be focused on.

The NGCV needs to be two different platforms, not one.

For the Army, trying to combine an infantry vehicle’s requirements with a tank is a fool’s errand that has the potential to severely limit an armor commander’s ability to maneuver in combat against multiple threats. Yet, that’s exactly what is on the table. “The Next Generation Combat Vehicle might be an Infantry Fighting Vehicle, but it might be a single combat vehicle that replaces the Abrams, the Bradley, potentially the MPF (light tank) and even the Stryker (wheeled armored vehicle),” Col. William Nuckols, the Army’s Director of Mounted Requirements, said in an interview with Breaking Defense.

According to Robert Rock, an M1 armor crewman who served from 1988 to 1991, it’s better to be really good at one task as opposed to being mediocre at multiple. He believes the platforms need to be kept separate. Rock, who did a tour in South Korea during his enlistment, went on to say, “(If) you start combining platforms into one vehicle, you get one vehicle that is good for nothing.”

To truly be an improvement over the existing platforms, the NGCV needs to be just as comfortable in a showdown with a Russian T-14 as it is aiding infantry troops in a firefight with insurgents. That’s a tall order to fill, but a necessary one. Ray Muncy, an M1 armor crewman who has been serving in the Army since 1996, told T&P;, “It needs the crucial balance of armor, firepower, mobility, reliability.”

What does that mean? It needs to have a main cannon powerful enough to take out enemy tanks, and the survivability to take a round from the same. It needs to be agile enough to maneuver in urban environments, while offering protection from improvised explosive devices that will test the NGVC in different ways than rounds from conventional anti-tank threats.

The platform needs to be able to carry a whole squad together.

It needs to be “Big enough to carry a squad and the small arms to provide suppression fire,” according to Eric Wasson, who served from 1984–1991 as a tank crew member and also took part in Desert Storm. Back when soldiers were not only smaller, but also carried less equipment, the Bradley was sufficient. But the modern infantry squad is nine soldiers strong, and with plate carriers gracing the heavier-set silhouette of the modern infantryman who increasingly prefers the weight room to the running trail, a more robust platform is needed.

Right now the Stryker fills that niche rather impressively, but if a replacement were chosen that favors a tracked approach as opposed to wheels, it would be unwise to force squads to split up. This would reduce a leader’s ability to execute command and control, and combat is chaotic enough as it is. A split squad would also mean that more vehicles would be required in order to move the same amount of troops — which means more vehicles that need gas, and more vehicles that can break down at the most inconvenient time.

The NGCV needs to accommodate a variety of weapons platforms.

Whether it’s a tank with a main cannon or an infantry carrier, the NGCV needs to be modular enough to accept a variety of weapons systems for addressing enemy infantry and smaller targets. Right now, the Abrams tank could potentially be outgunned, according to testimony Army Lt. Gen. John Murray gave to Congress on March 22. Referring to how the Abrams stacks up against foreign armored vehicles, he said, “I think there is parity out there. I don’t think we have overmatch.”

The ability to mount a M2 .50 caliber machine gun and/or a Mk-19 40mm automatic grenade launcher is a commonsense place to start. After that, a secondary machine gun like a M240B machine gun would fit the bill, while still leaving room for communications equipment and a clear field of view for the vehicle/tank commander. Some tankers would prefer to take it a step further, requesting the option to add 30mm cannons and a missile or rocket system similar to the Russians’ BMPT “Terminator” platform. When it comes to firepower, you can’t go wrong with the “P for Plenty” principle.

The NGCV needs to go further on less fuel while still offering adequate protection for the soldiers inside.

With anti-tank missile technology becoming more advanced and more available around the world, survivability will be a major concern on the next battlefield. The trick is to balance this with a vehicle light enough to not only be fast on the ground, but also not strain the planes and ships that transport it to the combat zone.

“Outside of reducing reliance on fossil fuels, energy efficiency reduces the risk of insurgent attacks in Soldiers during refueling convoys, as a mere 1 percent increase in fuel efficiency means 6,444 fewer Soldier trips in convoys,” said Jerome Aliotta, a spokesman for TARDEC, earlier this year.

Poor fuel efficiency makes the current crop of combat vehicles a slave to the logistics train. The Abrams tank only achieves three gallons to the mile, an abysmal statistic in light of technological advances that are now available. Any changes to alternate fuel sources or upgraded turbines must be reliable though, and cannot create more problems than it solves — we can’t have tanks looking for an outlet in the middle of the desert. If the NGCV can improve on that aspect of the status quo, the United States would have an armored force that can truly move with speed, surprise, and violence of action.

The monetary cost pales in comparison to the effects of fielding a subpar fighting vehicle though; defense contractors must always keep the fact that American lives are on the line at the forefront of all discussions of NGCV development and testing. As the German armor officer Hans Guderian once said, “If the tanks succeed, then victory follows.”

Special thanks to the members of USABOT who assisted with this article.