On Friday, the U.S. Army published a solicitation for a new 7.62mm Interim Combat Service Rifle, or ICSR, for infantry... 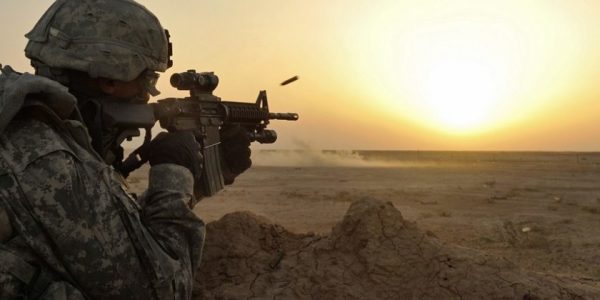 On Friday, the U.S. Army published a solicitation for a new 7.62mm Interim Combat Service Rifle, or ICSR, for infantry units that can penetrate body armor.

“The Army has identified a potential gap in the capability of ground forces and infantry to penetrate body armor using existing ammunition,” the solicitation reads. The program’s ultimate objective “is to acquire and field a 7.62mm ICSR that will increase soldier lethality.”

The call for a new 7.62mm rifle emerged from a requirement direct by Vice Chief of Staff Gen. Daniel Allyn in April, Military.com reported.

The new rifle must be chambered in 7.62x51mm, not the standard 5.56x45mm used by the Army and that Congress has been pushing the Marine Corps to adopt. It must be capable of both semi and fully automatic fire and be able to attach a suppressor, according to the solicitation, and be capable of accurate fire out to 600 meters and weigh under 12 pounds unloaded.

The Army is looking to downselect eight rifles for testing and evaluation from small-arms industry bidders. The solicitation notice states that up to 50,000 rifles may be purchased for the ICSR program, but this number is not set and may decrease or increase.

The ICSR program comes after Army Gen. Mark Milley, Army Chief of Staff, admitted to Congress that the Army’s M855A1 Enhanced Performance Round cannot penetrate armor plates that may be used by future enemies.

The Army also continues to be concerned about overmatch (the out-ranging of soldiers on the battlefield by enemy small arms — a problem discovered in Afghanistan) and the need to penetrate increasingly prolific cheap ballistic body armor. The new rifle will chamber the Army’s new M80A1 round and perhaps even the new XM1158 Advanced Armor Penetrating round currently in testing.

Companies looking to submit a rifle must have a full proposal, a safety assessment, and a sample weapon (along with a manual, cleaning kit and magazines) along with a suppressor ready by Sept 6. Successful applicants will later have to provide a further seven rifles for testing.

According to request for information released in May, the new rifle will need either a 16-inch or 20-inch barrel, a collapsible buttstock and a rail system capable of mounting optics and other accessories. The ICSR will also need a 30-round magazine as it seems the Army is unwilling to sacrifice its current 210-round standard loadout. It should be noted, however, that retaining this loadout would greatly increase the weight the average infantryman is carrying as one of the key attributes of 5.56 is its weight ratio.

It also called for a “Commercial Off The Shelf (COTS) system readily available for purchase today. Modified or customized systems are not being considered.” It appears that the new solicitation is maintaining this requirement. The Army is looking for weapons that are fully developed, currently available, and suitable for their needs. While there are many rifles made for the civilian market which are chambered in .308/7.62x51mm, none of them are capable of fully auto fire. The FN SCAR Heavy and Heckler & Koch’s 417 are the two most prominent 7.62x51mm rifles designed for full auto fire while others, like the Knight’s Armament M110, H&K; M110A1 and Lewis Machine and Tool LM308MWS, are all optimized as designated marksmen rifles and fire semi-auto only.

In addition to the ICSR program, it is likely that there will be accompanying suppressor and optic trials programs to select a suitable accessories for the new rifles.

It is worth noting that the new rifle has been designated an “interim” weapon, suggesting that the revision back to 7.62x51mm will not be a permanent one. A number of ammunition programs are currently underway such as U.S. SOCOM’s evaluation of 6.5mm ammunition and the Army’s Lightweight Small Arms Technologies program.

Task & Purpose will continue to bring you the latest on the Interim Combat Service Rifle.