The Army Has A Round That Punches Through 5.56mm-Resistant Armor 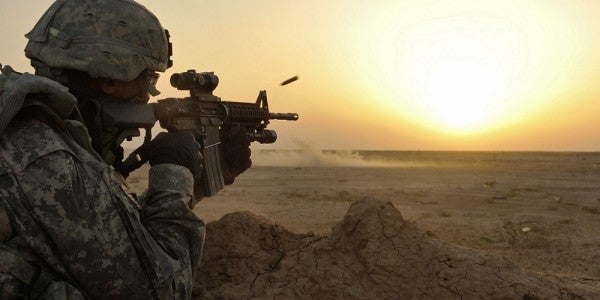 “The 5.56 round, we recognize there is a type of body armor it does not penetrate, and adversarial states are selling that stuff on the Internet for about 250 bucks,” Milley explained during a Senate Armed Services Committee hearing, adding, “We think we have a solution … We know we have developed a bullet that can penetrate these new plates.”

The Army's Maneuver Center of Excellence at Fort Benning, Georgia, is testing different caliber rounds, which range between the 5.56 mm and 7.62 mm rounds used by U.S. troops, according to Army Times. Milley stressed that the focus is on increased lethality for the bullet, not on a new rifle. When asked if the higher-caliber round would require a new rifle, Milley responded that “it might, but probably not,” though he went on to say that there are off-the-shelf rifle options for the service.

Related: 5 Things To Know About The Army’s Plan To Pick A New Rifle »

With more than 70 % of U.S. casualties coming from ground combat troops — mostly within the infantry and special operations forces — new body armor, along with a new weapon system, and a higher caliber round are “critically important,” Milley said.

Last week, retired Army Maj. Gen. Robert Scales addressed the Senate Armed Services Committee and stressed that the service needed to abandon 5.56 mm ammunition, along with the M4 and M16 family of rifles in favor of a new, more modular and lethal weapon system.

Scales has spent the last few years railing against the M4 and M16, and on May 17 said that thousands of combat troops have “died because the Army’s weapon buying bureaucracy has consistently denied that a soldier’s individual weapon is important enough to gain their serious attention.”