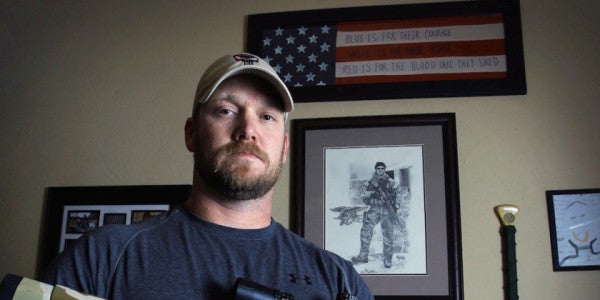 “We recognize that there is a discrepancy and we are looking into it right now,” a Navy official, who asked for anonymity in order to discuss the situation, told Military.com.

The new probe comes in the wake of an investigative story by The Intercept, published Wednesday, that highlights Navy personnel documents showing Kyle earned only one Silver Star and three Bronze Stars, rather than the two Silver Stars and five Bronze Stars that he publicly claimed.

Kyle, who has been called the deadliest U.S. military sniper in history, shot to fame when he published his memoir, “American Sniper,” in 2009. The story became a blockbuster movie starring Bradley Cooper in 2014. The year before the film’s release, Kyle was tragically murdered by a disturbed veteran at a shooting range in Texas.

While some of Kyle's previous claims have been successfully challenged — notably, former Minnesota governor and professional wrestler Jesse Ventura successfully sued Kyle for defamation over a claim the Kyle punched him in a bar — questions about his medal count have not gained much public traction.

But multiple Navy officials who spoke with Military.com said they now consider the documents on file with Navy Personnel command to be the most accurate record of Kyle's combat awards.

“The Navy considers the individual service member's official military personnel file and our central official awards records to be the authoritative sources for verifying entitlement to decorations and awards,” Navy Personnel Command spokesman Cullen James said in a statement provided to Military.com. “The form DD-214 is generated locally at the command where the service member is separated. Although the information on the DD-214 should match the official records, the process involves people and inevitably some errors may occur.”

“We're sifting through who owns that piece,” the official said, regarding the discharge form that Kyle received.

The official said no DD-215 form, correcting the original discharge papers, has ever been issued for Kyle, indicating the Navy has never before tried to correct the record publicly. At this point, the official said, it's not clear how long the investigation into the discrepancy will take, or how high the inquiry will rise up the chain of command.

“As we figure out which route we're going or does a correction need to be made, we'll make that information public,” the official said.

Doug Sterner, a Vietnam veteran who maintains the Hall of Valor, the most comprehensive online database of U.S. military awards in existence, said he has long believed Kyle rated only one Silver Star, and lists only one in the database.

That Silver Star is for gallantry during a 2006 deployment to Ramadi, Iraq, in which Kyle personally accounted for 91 confirmed enemy sniper kills and dozens more likely enemy casualties. The Silver Star is the third-highest combat honor, and relatively few troops have ever earned more than one.

Sterner said he never publicly questioned Kyle's claims of additional awards, because he believed it was possible Kyle might have earned a Silver Star that was classified due to covert operations. But the revelations from The Intercept removed his remaining doubts, he told Military.com.

“I have suspected this for some time, but I've done interviews where I've said this is what I believe, but I'm not going to go there, because I believe Chris Kyle is a hero in the veterans community,” Sterner said. “And I've learned a long time ago that the response is often to kill the messenger.”

Fewer discrepancies would arise, Sterner said, if the military would abandon its recent trend of liberally classifying valor awards for special operations missions.

“I have never seen this fetish for classifying awards that we've seen in the war on terrorism,” Sterner said.