There are few things that scream 'America' more than the incredible might of the U.S. military. Warm apple pie with... 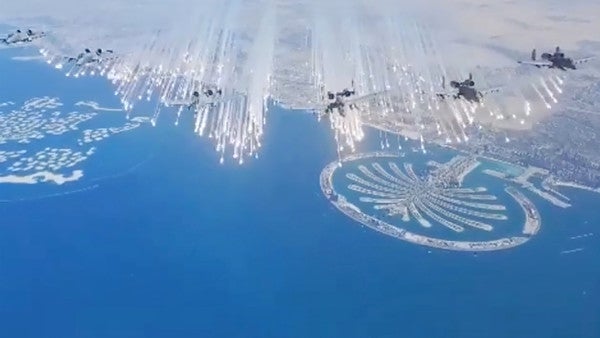 There are few things that scream 'America' more than the incredible might of the U.S. military. Warm apple pie with ice cream? Sure. A game of baseball on a summer night? Definitely! Fireworks on the Fourth of July? Abso-fucking-lutely.

Now you can add the glory of half-dozen A-10 Thunderbird II aircraft dropping a buttload of flares to your list of all-American goodies.

A new video posted to popular military aviation Facebook page Combat Learjet shows 6 A-10s flying in formation behind a tanker before firing off a cascade of flares above Dubai's artificial Palm Islands.

Sure, the backdrop of Dubai's artificial islands may not be as aggressively American as, say, the Statue of Liberty, but it's a dazzling sight to behold regardless — and if this doesn't make you leap from your chair and shout ''MURICA!' at the top of your lungs, I don't know what will.

Many thanks to our friends a The War Zone for first spotlighting this video, and be sure to follow Combat Learjet for more great aviation videos.