The Navy plans on decommissioning its first four littoral combat ships in fiscal year 2021, the Navy announced on Monday, all of which have at least a decade of planned hull life remaining 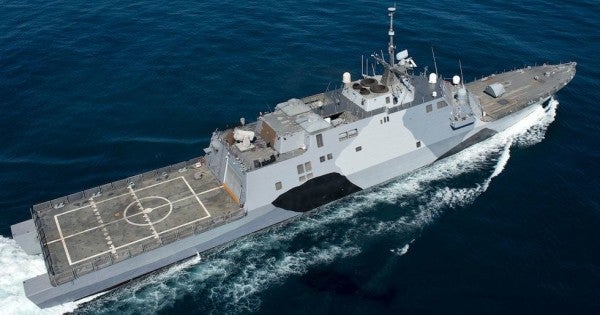 The Navy plans on decommissioning its first four littoral combat ships in fiscal year 2021, the Navy announced on Monday, all of which have at least a decade of planned hull life remaining.

The move is part of a plan to send several “less capable” hulls into early retirement, according to Navy budget documents released on Monday, as part of broad shipbuilding roadmap that's focused on ” more capable, ready and lethal force.”

“These ships have been test articles and training assets, and were key in developing the operational concepts leading to the current deployment of LCS ships today,” according to the Navy's justification for the move. “But cancelling their modernization allows us to prioritize lethality and survivability where we need it.”

The service had previously floated the prospect of slashing roughly a dozen existing ships in order to free up billions in savings for future ship-building investments, according to a December memo from the White House's Office of Management and Budget.

While the OMB had flatly rejected the proposal and insisted the service come up with a plan “to achieve a 355-ship combined fleet, including manned and unmanned ships, by 2030,” that clearly hasn't stopped the service from moving to ditch the notoriously buggy LCS.

Indeed, the Navy had previously turned the four LCS hulls in question — the USS Freedom, USS Independence, USS Fort Worth, and USS Coronado — into non-deployable test ships in 2016 over a series of engine problems, according to Military.com.

Initially envisioned as a “relatively inexpensive surface combatant” with an advanced modular design, the Navy technically had 16 operational LCS hulls at the end of fiscal year 2019, according to the latest Congressional Research Service analysis of the line.

But years of frequent mechanical failures ad embarrassing cost overrunskept the Navy from deploying a single one of the small surface combatants during all of 2018 despite officials' previous plans to deploy several to join the 7th and 5th Fleets, reinforcing the vessel's reputation as a “little crappy ship.”

The Pentagon Operational Test & Evaluation office's 2018 review of the LCS fleet revealed alarming problems with the vessel's combat system elements and a distinct lack of redundancies for vital systems necessary to reduce the chance that “a single hit will result in loss of propulsion, combat capability, and the ability to control damage and restore system operation.”

Indeed, the Pentagon's most recent OT&E review published this past January affirmed that both of the Navy's LCS variants are sitting ducks when it comes to defending themselves against anti-ship missiles, significantly lacking in critical defensive capabilities.

Despite these deficiencies, the Navy “has not tested these combat systems does not plan to conduct further air warfare operational testing” of its Freedom-class LCS hulls “in their current combat configuration,” according to this year's OT&E review.

The reason? According to the OT&E report, there isn't really any: the Navy “has accepted the risk of continued operations with a combat system that they have not operationally tested.”

Considering the LCS's ongoing survivability issues, it's no wonder that the Navy wants to shift procurement of small surface combatants to focus on the brand-new FFG(X) frigate that the service requested $82 million for in its fiscal year 2021 budget request.

Naval Sea Systems Command did not immediately respond to request for comment.