The newest weapon in the Navy's arsenal is ready for action 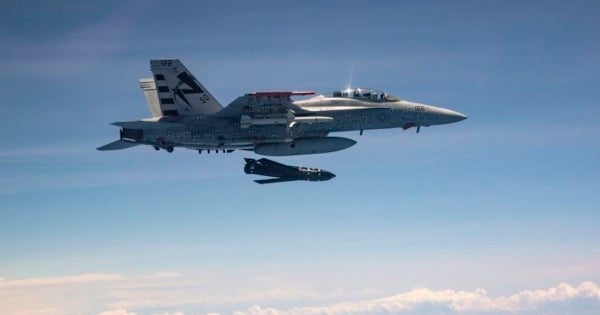 The newest weapon in the Navy's arsenal is ready for action.

The LRASM previously achieved EOC with the B-1B Lancer bomber back in December 2018.

Conceived by the Defense Advanced Research Projects Agency (DARPA) as a replacement for the AGM-88 Harpoon anti-ship missile, the LRASM can deliver a 1,000-pound penetrating warhead at a range of up to 500 nautical miles, according to USNI News.

More importantly, the LRASM comes with a unique sensor and targeting system designed to hone in on targets in even the most contested environments, a system that includes “enhanced digital anti-jam GPS to support precision routing, guidance, and terminal homing in all weather conditions, day or night,” per Jane's 360.

“LRASM is designed to detect and destroy specific targets within groups of ships by employing advanced technologies that reduce dependence on intelligence, surveillance and reconnaissance platforms, network links and GPS navigation in contested environments,” according to Lockheed Martin. “LRASM will play a significant role in ensuring military access to operate in open ocean/blue waters, owing to its enhanced ability to discriminate and conduct tactical engagements from extended ranges.”

Thanks to this design, LRASM “can be sent to attack enemy task forces, skirting around air defense radars it detects and plotting the least-defended way forward,” as Popular Mechanics explains. “Once it locates the enemy fleet, it can pick out a specific target and attack a specific part of the target—say, the location of the ship's combat information center, or the ship's gun or missile magazine.”

With these capabilities, the LRASM “will play a significant role in ensuring military access to operate in the Pacific and in the littorals by providing a long range surface warfare capability,” Naval Air Systems Command told Naval News, which first learned of the weapon's status.

Indeed, the LRASM's EOC declaration couldn't get here soon enough. With the U.S. now focusing on “great power competition” with Russia and China after 18 years of land-based counterterrorism operations in the Middle East, the Navy's anti-ship capabilities have been in dire need of a refresh.

According to USNI News, the LRASM could eventually end up a fixture of the Air Force B-52 Stratofortress and the Navy P-8A Poseidon.