Here’s why the Marine Corps is getting Tomahawk cruise missiles

The Navy is stocking up on Tomahawks, and the Marine Corps is too for some reason 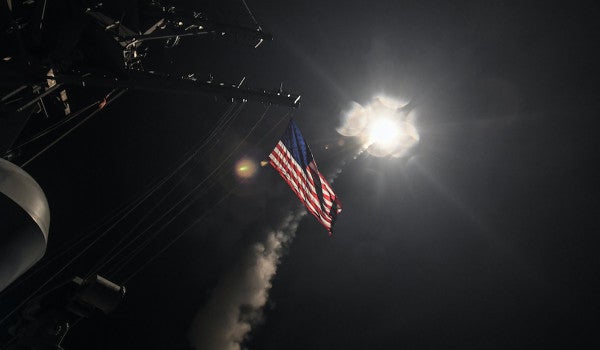 The Navy's decision to get more Tomahawks isn't all that shocking — after all, the missiles made national news as recently as 2017 after President Donald Trump approved launching dozens at targets in Syria.

However, the fact that the Corps wants to get their hands on the cruise missile is surprising.

“The Marine Corps is procuring the Tomahawk missile as part of an overall strategy to build a more lethal Fleet Marine Force,” said Capt Christopher Harrison, a Marine Corps spokesman, who also confirmed to Task & Purpose that the Marine Corps' intent to procure Tomahawks is “a new development.”

“This capability is in support of the Marine Corps Expeditionary Advanced Base Operations (EABO) and the National Defense Strategy (NDS) approach to build a more lethal Joint Force,” Harrison said. “Further details on the capability and or employment are classified.”

Beyond the obligatory invocation of “lethality” — twice in as many sentences — the official response doesn't quite get to why this matters, what it means, or why it's happening now.

Fortunately, it's not rocket science. Since the late 1980s the United States had adhered to the the rules of the Intermediate-Range Nuclear Forces Treaty, a set of guidelines signed by President Ronald Reagan and Russia's Mikhail Gorbachev in 1987 that limited the types of weapon systems the nations involved could use.

One of those rules involved barring the use of long-range ground-launched missiles, like Tomahawks, which under the INF could not be fielded from land. When the U.S. withdrew from the INF treaty in August, that restriction went out the door. With the Marine Corps getting their hands on Tomahawks of their own, that means there are more places from which they can be launched.

“There's not a lot of detail included here, but taking ashore strike assets like the Tomahawk and making them mobile would seem to fit squarely with the vision of Commandant [David] Berger's new planning guidance, which is to say distributed fires coming from both land and sea that complicate an adversary's surveillance and targeting job,” explained Tom Karako, the director of the Center for Strategic and International Studies' Missile Defense Project.

“That the U.S. Marines are getting Tomahawk speaks volumes about the no-kidding seriousness with which service operational concepts are approaching great power competition,” Karako told Task & Purpose.

The move is in line with the Commandant of the Marine Corps Gen. David Berger's long term plans for the service, especially his plans for dealing with other militaries who have massive arsenals of their own.

“I am absolutely embracing Distributed Maritime Operations as a naval concept,” Berger said in October. “We must distribute the force for two reasons: one is because, in a peer-to-peer fight, what you do not want to do is drive down into the heart of their collection of weapon systems in a narrow funnel; you want to distribute your force so that you pose an adversary a dilemma from multiple axes in multiple domains. The byproduct of dispersing, of distributing, is you also become more survivable, more difficult to detect.”

The basic idea: If you can fire off these bad boys from multiple locations — at land and sea — then they're that much harder to stop, and if your enemy has to worry about threats from every corner, they might miss one.

To date, some 2,300 Tomahawks have been used in combat operations, according to Raytheon, the weapon's manufacturer.