“Many see it as just a cargo aircraft. To me, it was always a vessel of hope." 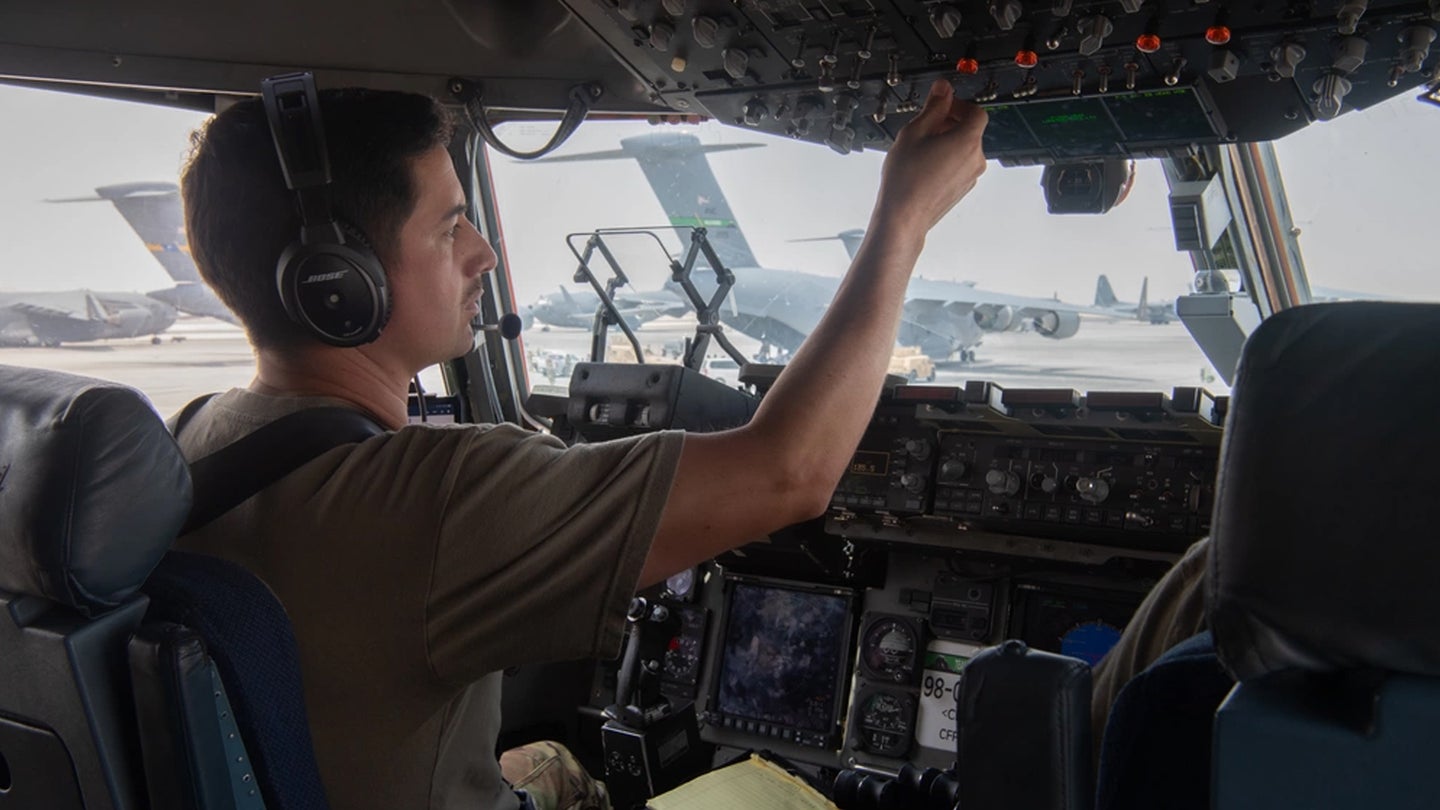 However you feel about the end of the war in Afghanistan, one thing is certain: the U.S. Air Force airlifted a hell of a lot of people and supplies in and out of Kabul since Aug. 15, when the city fell to the Taliban. By the time the last C-17 took off from Kabul on Monday, 120,000 Americans, Afghans and other allies had been moved out of the city, according to the White House, all without a major aircraft mishap or accident, which is an achievement all its own considering the crowded airspace and limited air traffic control over Kabul.

It was the largest non-combatant evacuation (NEO) in U.S. military history. But such an achievement comes at a cost, and some of that was borne by the Air Force crews constantly flying in and out of danger. Two C-17 Globemaster III cargo jet pilots who participated in the evacuation told Task & Purpose they were exhausted, but glad to have accomplished their mission at a time when the U.S. and its allies needed them most.

“Yeah, the C-17 community is burned out, never been ran this hard,” said one pilot who spoke on the condition of anonymity since he was not cleared to speak with the press. “Jets broken everywhere. But we got a lot of folks out. Hopefully, they can find better lives in the U.S. Maybe the silver lining to this whole thing.”

The C-17, also known as the “Moose” by the people who fly them, was the jet that lifted a record 823 people out of Kabul in one flight. Earlier this month, an Afghan mother even named her daughter “Reach” after the call sign of the C-17 she gave birth on when it landed at Ramstein Air Base, Germany. Airlift missions like this one are exactly what the Moose, which can take off and land on relatively short runways around the world, is designed for. But it also takes a certain type of pilot who is willing to fly into desperate situations and pick people up.

“When I look back on why I chose the C-17 in pilot training, it’s this defining moment that comes once in a generation that makes the long stretches of being tired, of being stretched to the limits worth it,” said a second pilot, who also spoke on the condition of anonymity for the same reason as the first.

Air Force C-17 pilots have been flying in and out of Afghanistan since the beginning of the conflict 20 years ago, but the mission to evacuate tens of thousands of civilians in a short amount of time presented unique challenges for pilots, especially early on when C-17 crews were cramming as many people as possible into the jets and the runway was filled with people trying to get on board.

When you don’t know exactly how many passengers are in the back, you don’t know how much weight you’re carrying, which means you’re not sure how much runway you’ll need to take off, the second pilot explained to Task & Purpose last month. Making things worse, Kabul is at an altitude of about 5,900 feet, where the air is thin and therefore there is less of it around to generate lift below the plane’s wings. Plus, it’s the summer, so the air is even less dense because it’s hot out. That’s a challenge in a place like Kabul, which is surrounded by hazardous mountains.

“The higher you go and the hotter it gets, then yeah it cuts into your lift capability,” the first pilot said.

But even once you are airborne, there’s another problem: hundreds of people on board and only one toilet.

At the end of the airlift the “smell was not great,” the pilot said. “Most jets only had one bathroom so some people used the cargo floor. I don’t blame them. Terrible set up.”

If you think the smell is bad, just remember that C-17 and other Air Force pilots and loadmasters had to bear with it flight after flight throughout the mission. Air Mobility Command spokesperson Capt. Christopher Herbert told Task & Purpose it committed more than 230 aircraft to the effort, including C-17s, C-5 Galaxies, KC-10, KC-135 and KC-46 tankers, and C-130 turboprop transports.

“At one point, more than half the fleet of 222 C-17s were committed to this operation, with approximately 80 forward deployed into the EUCOM and CENTCOM” areas of responsibility, Herbert said.

“In terms of scale, this was an all-hands-on-deck operation,” he said, and his top commander was proud of the results.

“The bravery, professionalism, and adaptability displayed by the men and women of Air Mobility Command over the past few days were and continue to be awe-inspiring,” AMC chief Gen. Jacqueline Van Ovost said in a Facebook post on Aug. 18. “When our nation called, you maneuvered the joint force forward within hours.”

The U.S. Air Force was not the only one flying refugees out of Kabul. The effort was joined by commercial airliners and military pilots from other countries including the United Kingdom, Canada, Germany, India, Hungary and 17 other countries, according to Reuters. Still, the U.S. Air Force pilots on the scene had enough to do that they required assistance from the military’s number one hero: energy drinks.

“Energy drinks were so necessary that the base completely ran out of them,” said the second pilot of Al Udeid Air Base in Qatar. “From there it was Crystal Light Energy.”

That pilot flew 12 sorties in support of Operation Allies Refuge, the military’s name for the airlift out of Afghanistan. The pilot said 12 was a pretty middle-of-the-road number, but keep in mind that flying a military aircraft is an all-day affair, especially for long flights like the one from Kabul or Al Udeid to Ramstein, Germany, during which you might have to go through the mentally taxing process of air-to-air refueling, or declare an in-flight emergency when one of your passengers goes into labor.

“It all depends on how many 24-36 hour days a crew had,” the second pilot explained. “For a 2.5 week period, it’s a lot of flying when most duty days were 24 hours with the required 12 hours rest between them. Mathematically we were busy.”

The second pilot estimated that he had anywhere from 200 to 400 passengers on each flight, so he definitely moved more than a thousand people in total. Still, his was only one crew in a vast sea of airlifts flowing through Kabul.

“With 30 flights a day, we were a small cog in a big wheel, which is how so many were moved in such a short period of time,” he said. “Many cogs working together to move a huge wheel.”

The first pilot was not sure how many sorties he flew, but he lifted nearly 1,000 refugees in total. The C-17 is a strong airplane: it can carry up to 85 tons of equipment or a 69-ton M1 Abrams tank. But even the Moose wears out after taking enough punishment, like the kind it faced during Operation Allies Refuge.

“Jets aren’t in great shape,” the first pilot explained. “We flew with overworn tires, offline generators, low oxygen. Just not enough manpower to keep up. Will probably take a year for maintenance to catch up on repairs and cleaning. Never seen anything like this.”

But at the end of the day the jets and the crews pulled through to accomplish their mission, and in the process saved more than a hundred thousand lives. The second pilot felt the full weight of what he and his crew were doing after one flight carrying 200 people to Ramstein Air Base.

“After the flight, I went down to meet the passengers, and the most common question was ‘where are we?’” he said. “I cannot even begin to fathom leaving everything behind, let alone getting on a plane not knowing where it was going.”

But despite the bleak circumstances, the pilot saw Afghan children “playing games and making friends with people they had never met before,” he said. “It shows you that regardless of circumstance, humanity will always rise to the surface.”

For the pilot, the moment underscored one of the reasons why he loves the Moose. It’s more than an aircraft, he said, it’s a symbol all its own.

“Many see it as just a cargo aircraft. To me, it was always a vessel of hope,” the pilot explained. “Hope for soldiers coming home, hope for foreign aid assisting in natural disasters and national crises. Hope for the families who won’t get to hold their sons and daughters again, but will receive closure. To over 100,000 people of Afghanistan, the ‘17 became a vessel of hope and freedom.”