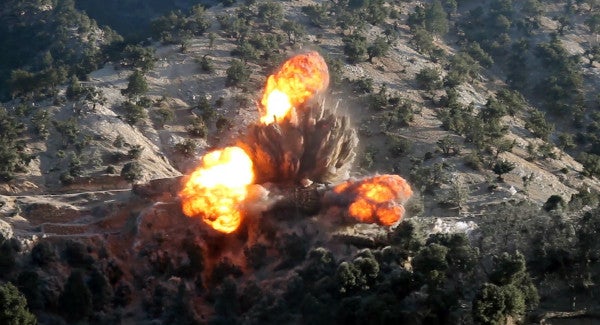 Afghan and Western military officials believe that ISIS is nearing defeat in Afghanistan following a weeks-long assault on the terror group's main bastion in the eastern part of the country, the New York Times reports.

Weeks after Afghan President Ashraf Ghani claimed that ISIS-Khorasan — the terror group's Afghan offshoot that first appeared in the country in 2014— had been “obliterated” in the country's Nangarhar Province, a unnamed Western military official told the New York Times that the group's strength had been reduced to around 300 fighters.

According to the the Pentagon's June report to Congress on the security and stability situation in Afghanistan, ISIS-K had roughly 2,000 fighters consolidated in the group's safe haven in the eastern part of the country.

A separate United Nations Security Council report put the number of ISIS-K fighters in Afghanistan at between 2,500 and 4,000, noting that the rate of ISIS attacks “was lower in early 2019 than a year earlier.”

The losses come after ISIS-K made significant “territorial gains” in the country's eastern provinces between December 2018 and May 2019, according to the Pentagon report, continuing to “evade, counter, and resist sustained pressure” from both U.S. and Afghan forces.

That resistance appears to have faltered: news of ISIS-K's decimation coincided with the end of a months-long offensive against the group's stronghold in Nangarhar's southern Achin district by Afghan government forces.

Radio Free Europe/Radio Liberty reports that more than 1,000 ISIS fighters and their families have surrendered to the Afghan government since that offensive began, including more than 100 fighters who surrendered on December 1 following the operation's conclusion.

Despite this progress, U.S. military officials appear unwilling to declare the counter-ISIS mission in Afghanistan accomplished just yet. In an interview with the New York Times, Army Gen. Austin S. Miller, the commander of U.S. Forces-Afghanistan and the Resolute Support mission there, warned that the terror group “could remain a threat in Afghanistan even if it does not hold territory,” as the newspaper put it.

“It was instructive in Iraq and Syria,” Miller told the New York Times. “When you take away big terrain from them, they move into smaller cells and they pop up in strange places.”

There are currently 13,000 U.S. troops in Afghanistan.