The U.S. government failed to effectively account for nearly $715.8 million in weapons and equipment allocated to Syrian partners as part of the multinational counter-ISIS fight, according to a new report from the Defense Department inspector general 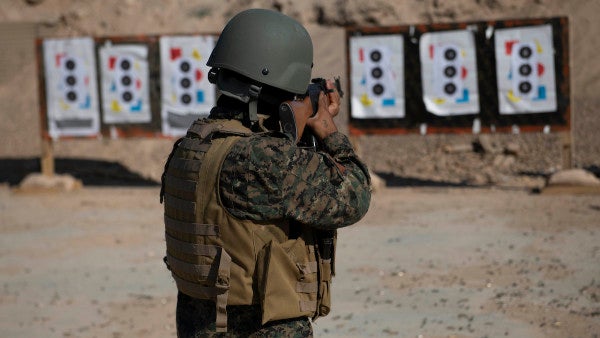 The audit, publicly released on Tuesday, revealed that officials with Special Operations Joint Task Force–Operation Inherent Resolve “did not maintain comprehensive lists of all equipment purchased and received” to equip Syrian allies in the anti-ISIS fight (known as CTEF-S equipment) in fiscal years 2017 and 2018 due to a lack of a central repository for accountability documentation.

In addition, officials with the 1st Theater Sustainment Command “did not properly store or secure” the relevant equipment in accordance with Pentagon guidelines so far that, in at least one case, 1st TSC personnel “stored weapons outside in metal shipping containers, exposing the equipment to harsh environmental elements, such as heat and humidity.”

The core focus of the report is the resulting equipment redundancies that arise from poor accounting. “Without accurate accountability records, such as inventory records and hand receipts, SOJTF-OIR personnel could order equipment that SOJTF-OIR already has in stock, risking unnecessary spending of CTEF-S funds and further overcrowding the BPC Kuwait warehouse resulting in equipment being stored outside.”

Poorly maintaining gear or ordering duplicates is one thing; maintaining custody of sensitive equipment, especially weapons, is another. Indeed, the DoD audit found that the lax standards for gear accountability left “thousands” of weapons and other gear “vulnerable to loss or theft.”

While Military Times rightfully notes that the audit doesn’t indicate that any of these weapons ended up in enemy hands, the audit suggests that the lack of clear accounting makes it impossible to determine what gear, if any, may have ended up where it doesn’t belong.

“Without conducting consistent inventories and ensuring proper security for CTEF-S equipment, 1st TSC could not determine whether items were lost or stolen which could delay the initiation of an investigation,” according to the report.

This is generally not great, but also deeply unsurprising. Indeed, a damning report from Amnesty International published in May 2017 suggested that the U.S. has already failed to track more than $1 billion in arms transfers to Iraqi and Kuwaiti security forces as part of OIR, a lack of accountability that didn’t stop the U.S. from requesting that $715.8 million in weapons and gear to equip Syrian forces

As Task & Purpose has previously reported, this lack of gear accountability among both U.S. forces and other foreign countries has only fueled the capabilities of non-state actors like ISIS. In August 2017, Iraqi security forces turned up an FGM-148 Javelin anti-tank missile and launcher while expelling militants from city of Tal Afar; the following month, an ISIS propaganda video showed a jihadi sniper rocking a U.S.-made 7.62mm Mk 14 Enhanced Battle Rifle.

This has been a problem since the beginning of the Global War on Terror. Indeed, a 2016 investigation into 14 years of Pentagon weapons contracts by non-profit Action on Armed Violence revealed that of the nearly 1.5 million firearms that DoD provided to Afghan and Iraqi security forces, officials only had records for around 700,000 weapons.

Those weapons can turn up when you least expect them — and in the worst possible way. Consider the deaths of two members of the 7th Special Forces Group in an insider attack in Afghanistan’s Nangarhar Province earlier this month. According to the New York Times, the Afghan soldier who killed them didn’t use a Soviet-era Kalashnikov, but an M249 Squad Automatic Weapon supplied by the United States.

According to the Pentagon audit, SOJTF-OIR and 1st TSC personnel agreed with the problems detailed by the DoD OIG and immediately initiated “corrective actions” to address the lack of accountability among U.S. military gear. But according to the report, this may be too little too late — and without a proper system, the U.S. has no way of knowing which gear is ending up in the wrong hands.