Watch This Reporter Almost Get Run Over By A Russian Bomber

A Russian reporter nearly got her head taken off during a live shot of a Russian TU-160 bomber landing in... 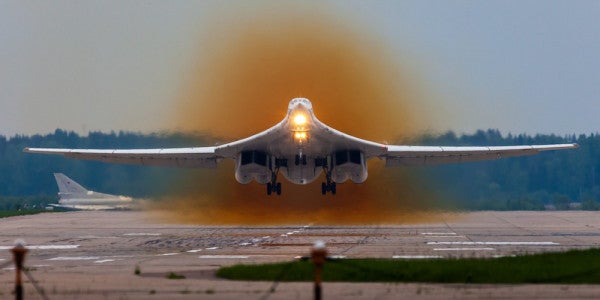 A Russian reporter nearly got her head taken off during a live shot of a Russian TU-160 bomber landing in Venezuela.

Maria Finoshina of Russia’s RT cable news network was standing on the runway as one of the two bombers sent to Venezuela was about to touch down. As she walked toward the landing aircraft, one of the bomber’s wings narrowly passed above her head.

“Wow! Spectacular,” Finoshina yelled ecstatically as she made a tactical withdrawal from the center of the runway. Although she maintained her composure throughout the landing, she is lucky to have escaped unscathed.

“She was far too close considering her potential to be injured by turbulence from the landing jet,” said Mark Gunzinger, a retired B-52 instructor pilot who is now a senior fellow at the Center for Strategic and Budgetary Assessments think tank in Washington, D.C.

“I'm surprised she was allowed to do that,” Gunzinger told Task & Purpose. “Then again, the Venezuelan regime doesn't seem to be too concerned with the welfare of its people, so perhaps I shouldn't be surprised.”

Generally, it is not a smart idea to walk on an active runway as planes are taking off or landing, said retired Air Force Lt. Gen. David Deptula, dean of The Mitchell Institute for Aerospace Studies.

After watching a video of Finoshina covering the bomber’s landing, Deptula described her reporting as, “Very enthusiastic, but pretty stupid.”

“The Air Force’s position is any time media is escorted out to a flight line, they work closely with airfield operations to maintain a safe distance from moving vehicles, whether they be on the ground or in the air,” Davis told Task & Purpose. “In addition, they follow various protocols set in place by security classification guidelines which are briefed to reporters prior to entering the area.”

Finoshina could not be reached for comment on Thursday. The Aviationist first reported about her close call with the Russian bomber.

Pentagon spokesman Eric Pahon has sharply criticized both Venezuela and Russia for holding military exercises while the country is in economic and political turmoil.

“As the Venezuelan government seeks Russian war planes, the United States works alongside regional partners and international organizations to provide humanitarian aid to Venezuelans fleeing their crisis-racked nation,” Pahon said in a rhetorical fusillade on Monday. “We maintain our unwavering commitment to humanity.”