Some might say Friday night's aircraft crash scene at Naval Air Station Jacksonville is "The Miracle on the St. Johns." 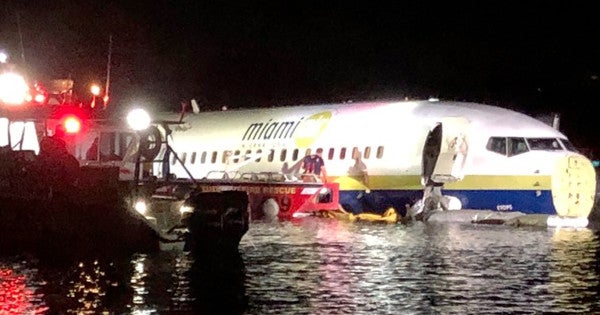 Some might say Friday night's aircraft crash scene at Naval Air Station Jacksonville is “The Miracle on the St. Johns.”

“It's a miracle,” Base commander Capt. Mike Conner said during a briefing after all 143 aboard the Boeing 737-800 survived after skidding off the runway into the river. “We could be talking about a different story.”

The Boeing was arriving from Naval Station Guantanamo Bay in Cuba about 9:40 p.m. on a stormy night, but it's still to be determined what caused the troubles. It ended up about 100 feet off the runway into shallow water, but Connor said no water entered the cabin. The National Transportation Safety Board is investigating.

Base Fire Chief Mark Bruce said passengers were on the wings of the plane as rescuers arrived, much like “The Miracle on the Hudson” in New York.

There were 136 passengers and seven air crew on board, all accounted for as Navy security and emergency response personnel converged on scene, base officials reported. Jacksonville Fire and Rescue Department spokesman Tom Francis said rescue units transported 21 adults from the site to area hospitals.

“The 21 individuals we transported were all listed in good condition, no critical injuries sustained,” Francis said. “We had over 80 JFRD members at the scene.”

Conner said there were some bumps and bruises but no broken bones.

The NTSB announced early Saturday that it had sent a Go Team to investigate Miami Air International flight 293. The plane is not the same type of Boeings that are grounded. Boeing said it is providing technical assistance in the investigation and extended its well wishes to all those on board.

Efforts are still being made to contain leaking jet fuel and locating some pets that were reported still in the cargo area.

It's unclear if the stormy weather factored into the incident, although First Coast News meteorologist Tim Deegan confirmed heavy rain and limited visibility in the naval air station area at the time of the incident.

The last time an airplane went into the river near the end of the runways at NAS Jacksonville was almost exactly 35 years ago. The Navy Convair C131-F military transport plane had 21 aboard as it had just taken off from NAS to Guantanamo went into the river after an engine caught fire. One person survived that May 1, 1983, crash.