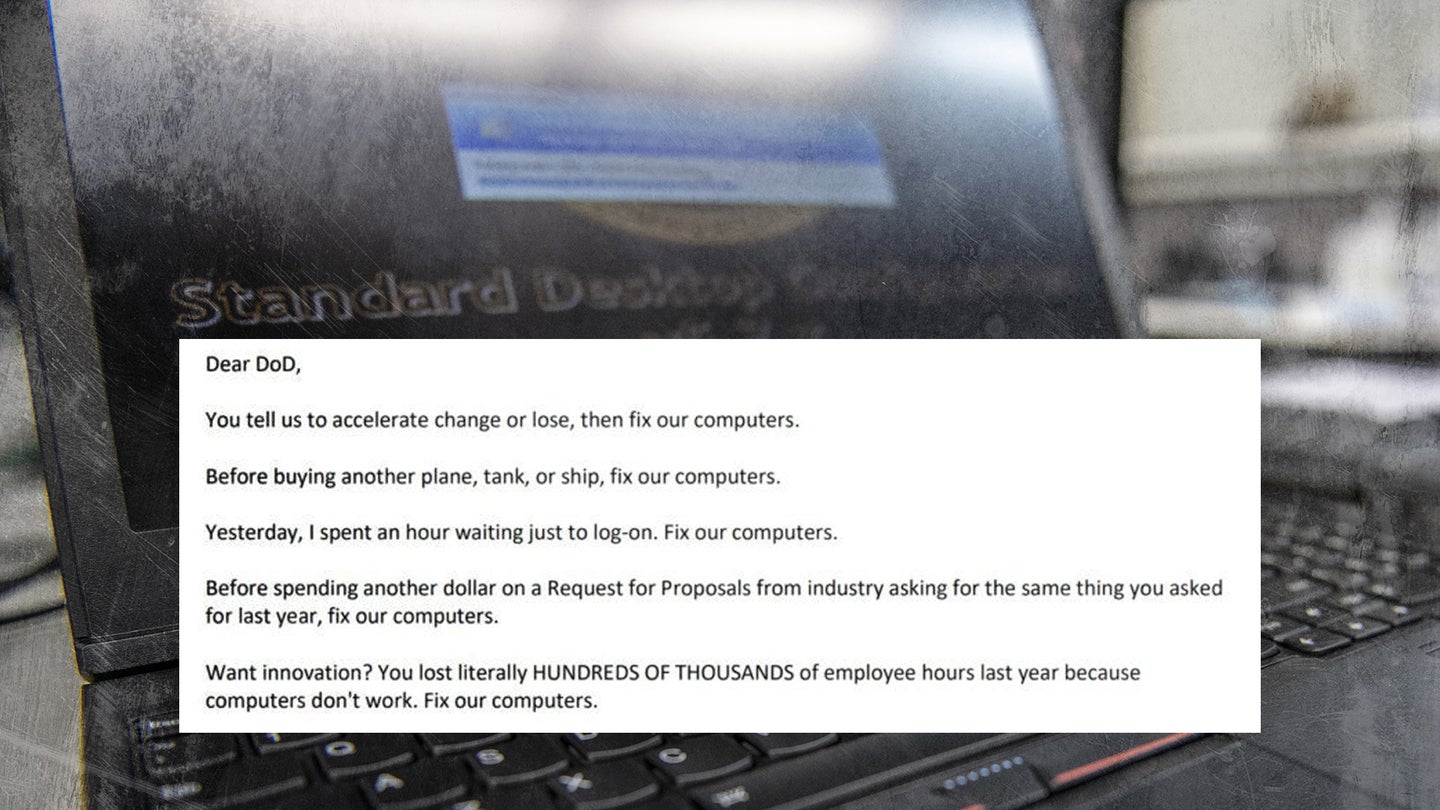 A Department of Defense employee calling for the military to fix its outdated, decrepit computers has found a receptive and equally frustrated audience, and for good reason: Despite having a $700 billion budget, many of the military’s computers are from the stone age.

“Yesterday, I spent an hour waiting just to log-on,” wrote Michael Kanaan, the director of operations for the Air Force – MIT Artificial Intelligence Accelerator, in a viral letter released on Tuesday. The letter was liked nearly 2,000 times and reshared by hundreds of users on Twitter and received at least 1,600 upvotes on Reddit, where military members past and present found common cause in the employee’s complaints.

“Want innovation? You lost literally HUNDREDS OF THOUSANDS of employee hours last year because computers don’t work. Fix our computers,” Kanaan said, before jumping into a list of widely-shared grievances he had about the state of the military’s computer infrastructure.

“We’re the richest and most well-funded military in the world …. and yet somehow fundamental IT funding is still an afterthought,” he wrote. “It’s not a money problem, it’s a priority problem.”

Complaining about military computers is not a new phenomenon. In fact, it’s almost a tradition, especially on the unofficial Air Force subreddit, where a trove of memes can be found contrasting the branch’s high-tech marketing image with its antediluvian hardware. The problem is so bad that just four months ago, the Air Force’s first-ever chief software officer quit because it was not worth fighting the entire bureaucracy of the Department of Defense just to get some basic information technology issues fixed.

“We are running in circles trying to fix transport/connectivity, cloud, endpoints, and various basic IT capabilities that are seen as trivial for any organization outside of the U.S. Government,” wrote Nicolas Chaillan in a LinkedIn post announcing his resignation. “At this point, I am just tired of continuously chasing support and money to do my job. My office still has no billet and no funding, this year and the next.”

Though Chaillan’s concerns dealt more specifically with the military’s cybersecurity and software development infrastructure and Kanaan’s seems to be focused more on hardware, the two experts both illustrate a similar problem: the military’s computing capabilities are not fast, secure, or resilient enough to keep pace with Department of Defense objectives.

“You tell us to accelerate change or lose, then fix our computers,” wrote Kanaan, referring to the Air Force Chief of Staff Gen. Charles Brown Jr.’s calls for his service to accelerate innovation or lose a possible war with China. Airmen on social media could relate.

“Working in Intel it was funny year after year, assignment after assignment, as each new group of airmen came in and all of them telling the same story, that they thought Ops Centers would be like in the movies and then finding out opening an email would lock up the computer if you also had a pdf opened,” wrote one on the unofficial Air Force subreddit.

“My computer froze today when I renamed a file on my desktop,” wrote another. “Fix our computers.”

The root cause for many of those office problems may go all the way to the top of the military.

“I share some of the frustrations expressed on that post,” Air Force Secretary Frank Kendall said when asked about the post in a live conversation with Chief Master Sergeant of the Air Force JoAnne Bass on Thursday. “We’ve got to get better …  there’s really no excuse for not having IT that’s responsive and capable.”

“We do experience those same challenges and it’s frustrating as heck that we have to do so,” she said. Fixing it will be a complex issue involving hardware, networking and infrastructure, Bass said, but she added that she has faith in the Air Force’s chief information officer, Lauren Barrett Knausenberger.

“I’ve seen the strategy that she’s outlined myself,” Bass said. “Here’s what we have to get after.”

Knausenberger herself weighed in on the issue earlier this week.

“Oh man, Michael Kanaan. I echo your open plea to fund IT,” she wrote on her LinkedIn page.

Knausenberger said her team has advised the Air Force major commands to finally switch their laptops from the old spinning disk hard drive to the more-modern solid-state hard drives. The CIO team is also working with computer security companies McAfee and Tanium to improve user experience (UX) and “streamline” the Air Force’s security, operations, and UX needs. She also hopes to release a “common road map” so that stakeholders know how the process is going.

Still, Knausenberger said that budget concerns are slowing down her team’s work.

“Everything is harder than it needs to be due to our legacy debt,” she said.

Bass agreed with that issue.

“We’ll just have to work really hard to make sure that we are able to budget for the foundation of what every single one of our airmen and guardians needs,” the airman said.

That better happen soon, because some experts warn that failing computers could be a serious strategic issue in a cyber fight.

“[I]t’s not just a retention issue, it’s a recruiting issue,” said Jeremy Buyer, a “people ops manager” for the Air Force, on LinkedIn.

“USAF says we need top talent cyber warriors and that we should hire them off the streets,” he said. “The hardware alone will cause them to leave. You think their buddies at Facebook, Google, and Amazon have their internet go out for 90 mins each day? What little leverage we might have over the Google’s of the world—i.e. a noble mission set like ‘service to country’—we undoubtedly lose with our stone aged IT infrastructure.”

You can read the full letter below: