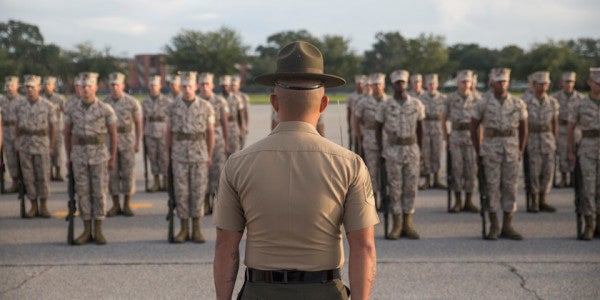 A recent death at Marine Corps Recruit Depot Parris Island, South Carolina, brought attention to hazing in Marine recruit training. Raheel Siddiqui, a Pakistani-American recruit was subjected to abuse, which including being slapped, being insulted based on his Muslim faith, and being put in an industrial clothes dryer which was then turned on.

Hard training and hazing are not the same thing. After hard training, one is better for the experience, and able to handle tougher challenges in the future. Hazing just beats people down, and establishes an expectation that the next generation should be subject to it as well, just the way child abusers were often abused themselves. The Marine Corps needs to address the problem it has with hazing at recruit training, both by better supervision, and also by addressing at least one of the reasons that drill instructors choose to haze: getting undesirable recruits to quit.

The investigation in Parris Island has revealed numerous abuses. For example, ethnic and homophobic slurs are frequently used. A drill instructor ordered one recruit to have the recruit’s sister call, so that the DI could hit on her. Perhaps most troubling, some abusive DIs may have been intoxicated. They knew what they were doing was against Marine Corps regulations; they told recruits,”snitches get stitches” and bribed some with food for their silence.

None of these techniques are authorized instructional techniques in the Marine Corps. Most are expressly proscribed. They’re sadistic and wrong, as well as ineffective. Nonetheless, the newest revelations raise the same chorus any story about military training invariably does — people stating that training has gotten soft and that beatings and ethnic slurs are part what makes Marines tougher.

What training value is there in ethnic or racially-based slurs or harassment? While they may be an effective means of tearing a recruit down, they leave no way to actually build him or her back up. There are plenty of harsh words available in the English language without resorting to ethnic slurs. A recruit can stop being incompetent; he cannot stop being of Pakistani ancestry.

Why A Zero-Tolerance Military Hazing Policy May Not Be Effective »

What part of military training is improved by having the instructors drunk in front of recruits? A DI’s job requires that he be in control of the training environment at all times. His absolute control of the recruits’ environment is part of his perceived authority. How is he supposed to have that if he isn’t even in full control of himself?

Many still say that corporal punishment and other hazing is an appropriate means to punish Marines, especially recruits. They claim that this is necessary to instill and maintain discipline. The cause and effect relationship between being hit, or being shoved in a clothes dryer, and becoming a more capable Marine is hard to explain. There are plenty of ways a drill instructor can make a recruit miserable without striking him, or worse.

The abuses uncovered after Siddiqui’s suicide weren’t the product of a carefully thought-out plan to tear recruits down in order to build them up into Marines. The abuses amount to nothing more than bullying and sadism under the color of authority.

As always happens after a high-visibility failure, corrective measures will be applied. Some already have been, such as increased officer supervision of NCO trainers, and mandatory suspensions for DIs under investigation. Some might even fairly be termed overcorrections, but when a large number of people in positions of authority at Parris Island clearly couldn’t handle autonomy without disastrous results, what was Marine Corps leadership supposed to do? It had to act, both because it was the right thing to do, and also to forestall the need for civilian leaders to impose even more drastic changes from a position of ignorance.

The pro-hazing voices out there, as repulsive as some of them are, do have one decent point, however. There are some recruits who shouldn’t be in the military.

However, we shouldn’t need to resort to hazing or abuse to get rid of them. In addition to the stock administrative solutions that have been or will be implemented, there should be one more: Kick out more recruits.

The historical rate of attrition from Marine Corps recruit training is only 10% for men and 15% for women. Of those, the large majority are dismissed for some variation of fraudulent enlistment, not for failure to perform at Boot Camp. Only about 23% of washouts (that is, two to 4% of total enlistees) actually leave for conduct or performance. As an old saying goes, the fastest way off Parris Island is to graduate. It’s actually pretty hard not to graduate, as long as one can put up with the requisite amount of harassment.

To fix this, the Marine Corps should build a greater amount of attrition into the system. Recruits who have persistent trouble during initial training often have issues later in their enlistments. Accept the cost of more attrition in boot camp in order to avoid first-term attrition later on. Give the DIs much broader latitude to bounce recruits and quickly process them out of the service with minimal review. This would also further enhance the elite reputation of the Corps — not only would it be known for the toughest initial training of the services, but also for its selectivity during that training.

Just as importantly, giving DIs more administrative authority to kick out non-performers removes the last excuse of those who haze — that they were doing it to remove a non-hacker from the service. Allow them the authority to do that the right way, without physical force, and the only DIs who still haze will be the true bullies and sociopaths, who can then be punished appropriately without any institutional remorse or second-guessing. It puts the onus on the DIs to do the right thing, because they will have no more excuses.

The Marine Corps can and must eliminate hazing and abuse in its recruit training. But beyond the usual administrative changes that have to happen, it can also use this opportunity to make the service tougher and more selective. The Marine Corps doesn’t have to become softer, just smarter.