A former Marine Corps senior drill instructor has been convicted of multiple charges for abusing his power over recruits at... 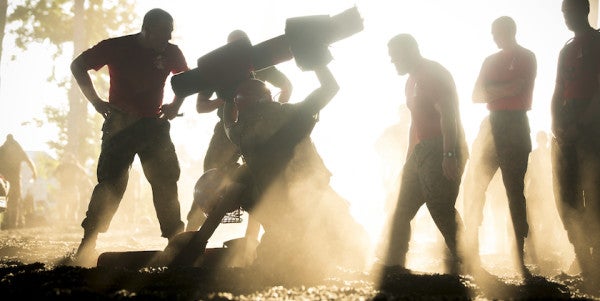 A former Marine Corps senior drill instructor has been convicted of multiple charges for abusing his power over recruits at Parris Island, the first guilty verdict handed down in a general court-martial in connection with a hazing scandal that erupted after a Muslim recruit killed himself at the depot last year.

Staff Sgt. Antonio Burke was found guilty of failing to adhere to recruit training rules in ways that risked recruits’ welfare, lying to an investigative officer, having a recruit complete his college homework, and propositioning the sister of another recruit, among other charges,Military.com reports. Burke, who was tried by a jury of enlisted Marines and officers, is expected to be sentenced on August 11.

Burke was one of six drill instructors charged for their roles in two separate incidents that allegedly occurred while they were serving with the 3rd Recruit Training Battalion at Parris Island. One involved Raheel Siddiqui, a 20-year-old Muslim recruit, being thrown into an industrial dryer. Siddiqui jumped to his death from a third-story barracks building on March 18, 2016, minutes after one of the drill instructors reportedly slapped him.

The other incident involved hazing in an abandoned squad bay known as “the Dungeon,” where Burke and his colleagues allegedly forced recruits to perform draconian training rituals, including “slathering them in sunblock and making them roll around in a sand pit for the purpose of irritating their skin,” according to Military.com.

Burke was not found guilty for his role in the Dungeon incident. He was also acquitted on a number of other serious charges, including being drunk on duty and attempting to bribe recruits with Clif bars to silence them as the hazing investigation got underway. According toMilitary.com, prosecutors struggled to prove certain allegations leveled at Burke because former recruits of his unit, Platoon 3044, gave confusing and sometimes contradictory testimony during the trial.

Among those who testified was Lance Cpl. Kelvin Cabrera, who claimed he was forced to act as a matchmaker between his two sisters and Burke after the drill instructor confiscated a photograph of Cabrera’s family. Burke was found guilty of messaging one sister via Cabrera’s Facebook page and of making Cabrera call the other sister so Burke could proposition her with a trip to Miami. The sister who received the phone call, Jennifer Cabrera, also testified against Burke.

“I believed the Marine Corps was out there to protect us,” she said. “That abuse of authority that was going on with my brother changed my opinion, slightly.”

The jury also found Burke guilty of forcing a recruit to do his homework for American Public University, as well as not taking proper action after one of the recruits in his charge lost consciousness. The recruit was later found to have a heart condition. Burke was also convicted of grabbing another recruit by his collar and pushing him.

AsMilitary.com notes, of the six drill instructors charged in connection to the hazing scandal, Burke appears to be facing the most serious punishment so far. One of his former colleagues, Sgt. Riley Gress, was acquitted of all charges in May, while two others were spared jail sentences and received administrative punishment instead. Two more cases are expected to go to general court-martial this fall.