Eight Marines and one sailor were killed in the deadliest training accident involving an amphibious assault vehicle in Marine Corps history. 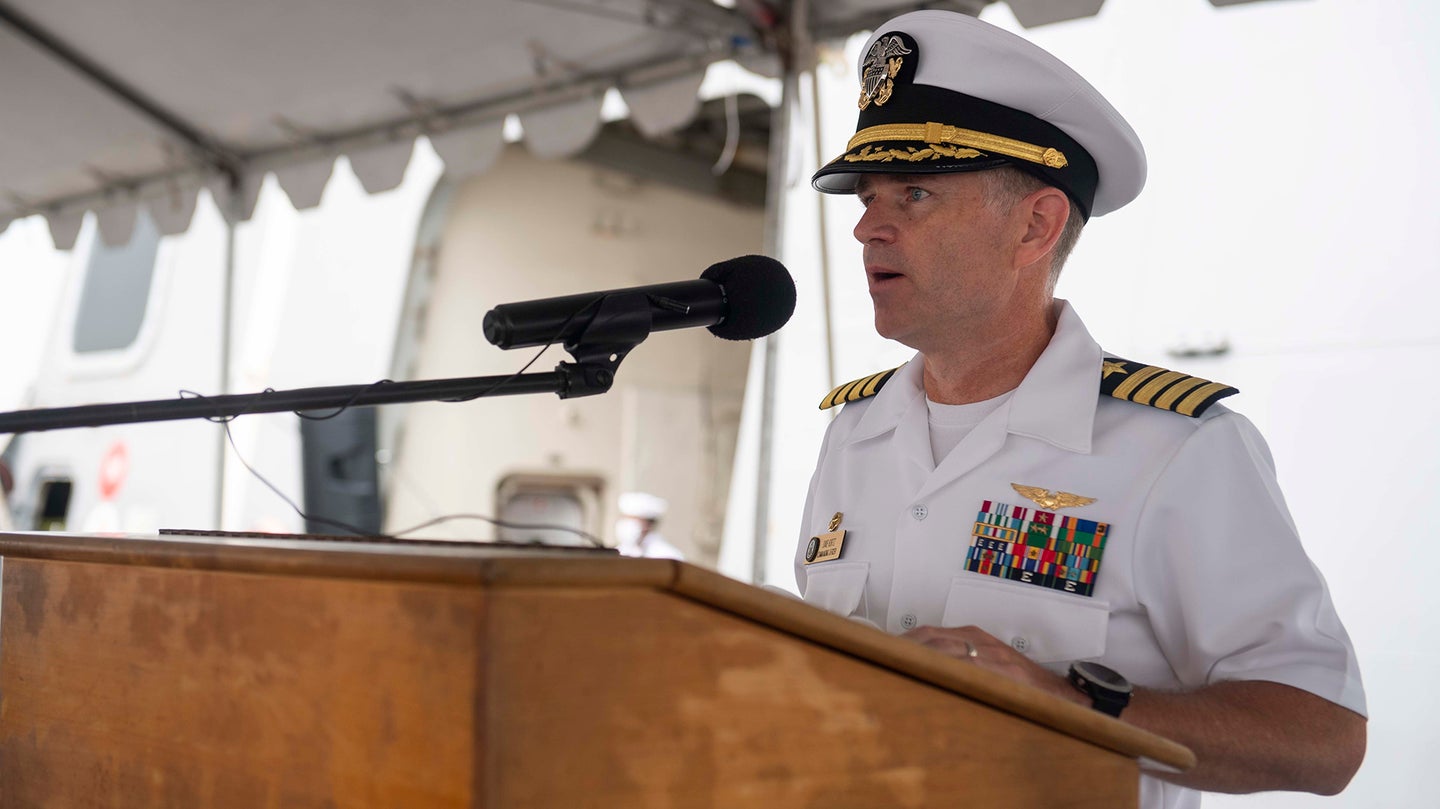 The former captain of the amphibious transport dock USS Somerset has been selected to command an aircraft carrier even though he received a letter of censure from the Navy Secretary for his role in the July 30, 2020 training accident in which eight Marines and one sailor died when their amphibious assault vehicle sank.

Capt. John William Kurtz’s name appears on the Navy’s fiscal 2024 list of officers who are recommended to command an aircraft carrier. If selected, Kurtz would not be promoted, as commanding officers for aircraft carriers hold the rank of captain.

It would be unusual for Kurtz to be selected to command an aircraft carrier: he was one of five officers censured by Navy Secretary Carlos Del Toro earlier this year for the 2020 incident, which was the deadliest training accident involving an amphibious assault vehicle in Marine Corps history.

“Although the investigation did not establish that any of USS SOMERSET’s actions or inactions caused the sinking, it ultimately found that you failed in your duties to oversee AAV [amphibious assault vehicle] operations as the primary control officer,” Del Toro wrote in the June 10 letter.

“Specifically, you failed to exercise positive control over the AAVs during their shore-to-ship transit. Additionally, some of the AAV associated briefings did not include a robust discussion of the actual dangers involved in AAV operations (e.g., vessels in distress and safety boats). As a result, your crew was poorly informed of the risks and measures required for safe AAV operations. Lastly, there was confusion regarding how safety boat requirements would be met, and you did not seek to verify those requirements were met once you became aware that AAVs were in the water.”

Navy spokesman Capt. Reann Mommsen confirmed that Kurtz had been selected for command by the Fiscal 2024 Active Duty Aviation Major Command Screen Board despite his letter of censure.

“Selection boards review the official records of screened members,” Mommsen told Task & Purpose. “Board deliberations are not a matter of public record. Unlike promotion board results, there is no requirement for administrative selection board results to be reviewed by JAG/CNO/SECNAV before they’re finalized and published.”

Kurtz’s letter of censure came nearly a year after the Navy and Marine Corps completed an investigation into the training accident, which found several communications failures and problems with command and control during the exercise.

The investigating officer also noted that Kurtz and the Somerset’s other top officers were not aboard the ship when it conducted its amphibious warfare basic certification, creating “a lack of experience in AAV operations in key SOM [Somerset] leadership positions.”

For example, Kurtz did not believe he had the authority to delay or cancel the return of several Marine amphibious assault vehicles from San Clemente Island, California, to the Somerset, according to the investigation.

“From the Confirmation Brief, SOM CO [Somerset commanding officer] believed the RFC [Raid Force Commander] held the authority to authorize, abort, or delay the splash from the beach,” the investigation found. “At the same time, the AAV platoon believed permission to splash needed to come from SOM, as it ultimately did.  The omission of clear lines of authority, coupled with an absence of an approval process within Navy doctrine, created a critical seam in command and control in the recovery phase, but did not contribute to the incident.”

Due to communications problems aboard the Somerset, neither Kurtz nor the officer of the deck were aware that the vehicles had been granted permission to return to the ship until they were already in the water.

The communications issues worsened after a helicopter requested to land on the Somerset while the vehicles were returning to the ship, according to the investigation, which prevented the Somerset from stationing a sailor in the aft lookout position An aft lookout would have been able to help the crew members on the ship’s bridge keep an eye on the returning amphibious assault vehicles.

“Nonetheless, once SOM was notified AAV 5 was in distress, all controlling stations were notified quickly and acted expeditiously to respond,” the investigating officer determined. “In my opinion, the ineffective internal communication aboard SOM did not directly cause or contribute to the sinking.”

The investigation also found that Kurtz did not provide safety boats for the vehicles’ return to the Somerset because he thought the amphibious assault vehicle platoon did not request any such boats. However, the platoon commander thought the Somerset would provide a safety boat because that was part of the plan that had been briefed the day before the exercise.

Ultimately, the investigating officer determined that “The operations conducted by the SOM were within permissible parameters and did not have a significant impact or cause the sinking. “

Still, Navy Adm. Samuel Paparo, head of U.S. Pacific Fleet, wrote in his endorsement of the investigation that he intended to take administrative action against Kurtz and the Somerset’s tactical action officer and the commander of the amphibious task force “unless otherwise directed.”

While the investigation found that Kurz was not directly at fault for the deadly training accident, captains are responsible for everything that happens aboard their ships, said retired Navy Cmdr. Bryan Clark, a senior fellow with the Hudson Institute think tank in Washington, D.C.

“His reprimand was as much about the bad communications and command and control than it is about the actual accident,” Clark told Task & Purpose. “If you find fault in the course of an investigation, you have to call it out. So, I think that’s part of what’s happening here: The letter was intended to address the fact that his command had some issues that he ultimately was responsible for. Those issues may or may not have contributed to this particular accident.”

Now that Kurtz’s name has been added to the list of officers selected to command an aircraft carrier, it could be a sign that the Navy is finally giving good officers a second chance rather than forcing them to retire after a single blemish on their careers, Clark said.

“The Navy used to be a place where somebody like Chester Nimitz could run a ship aground and then turn around and become the commander of the U.S. Pacific Fleet,” said Clark, a senior fellow with the Hudson Institute think tank in Washington, D.C. “But in the post-Cold War period, we’ve really got away from that and had very much a zero-defect or zero-fault policy, where if you had one mistake like that and got a letter of reprimand or a censure, you’re pretty much done.”

The fact that Kurtz was still selected to command an aircraft carrier could suggest the Navy is still confident in his ability to lead, said retired Navy Capt. Brent Sadler, a former submariner who is now the senior fellow for naval warfare and advanced technology at the conservative Heritage Foundation think tank in Washington, D.C.

“That said, guilty or not, surviving a letter of censure from the SECNAV [Navy Secretary] is rare and that this censure is from this current SECNAV likely means we have not seen the end of this story,” Sadler told Task & Purpose.