Does Navy QB Keenan Reynolds Have A Real Shot At The NFL?

Thursday’s NFL draft will have several college football players hoping they get a phone call from one of 32 professional... 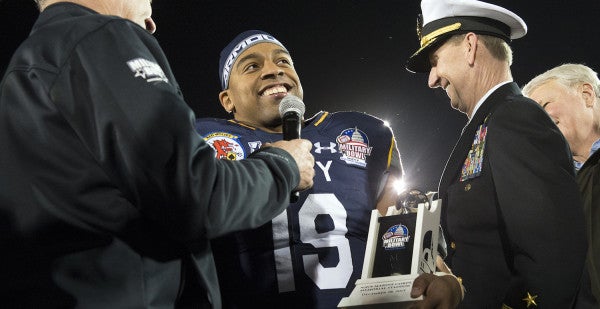 Thursday’s NFL draft will have several college football players hoping they get a phone call from one of 32 professional teams. The opportunity to play professional football is a lifetime dream for most college players, but many of them will likely not be one of 253 draftees selected. For those not drafted, their future hinges on obtaining a roster spot through free agency or the more likely scenario: trying to figure out what they are going to do with rest of their lives beyond football.

Not so for the U.S. Naval Academy’s heralded quarterback Keenan Reynolds. As a four-year starter and graduating senior, Reynolds already has a job serving the Navy for the next five years as an information warfare officer. It’s part of the commitment he signed up for when he came back for his junior year at Navy.

The Midshipmen call the first day back of your junior year “2 for 7” night. This is because Mids’ pledge the next seven years of their lives away when they make the commitment to stay at the academy to finish out their final two years of school in return for a top-tier education. The payback, once graduated, is a minimum five years of active-duty service in the Navy or Marine Corps.

Back in February when Reynolds did not receive an invite to the NFL scouting combine and his chances of being drafted appeared to have dimmed, he told USA Today that a career as a professional football player was second tier to his commitment to the Navy.

“Service is my priority,” said Reynolds. “Service is why I came to the Naval Academy.”

Doesn’t that statement make you want to root for the kid just a little bit more to get drafted?

Fast forward to April and the chances of Reynolds being drafted are starting to look fairly promising. Reynolds has drawn pre-draft interest from teams such as the Tennessee Titans, Baltimore Ravens and another likely source: Bill Belichick and the New England Patriots.

Belichick has strong ties to the U.S. Naval Academy. His father Steve was a long time scout and coach for the Naval Academy back in the 1950s and 60s. Across Belichick’s tenure at New England, four Midshipmen have played at some level for the Patriots, most recently the team’s current long snapper, Ensign Joe Cardona.

Cardona was drafted last year in the fifth round and was able to play the entire year, despite the lack of a clear and concise Department of Defense policy on when service academy graduates can play professional sports. Fortunately for Cardona, he was able to perform daily duties at the Naval Academy Prep School in Newport, Rhode Island, while also practicing for the Patriots during the week and playing for them on Sundays.

The Patriots have seven picks in the final two rounds, which is where Reynolds is currently predicted to go, although some Patriot pundits speculate that Reynolds could go as high as the third round if the Patriots draft him. Reynolds was put through a private workout with New England offensive coordinator Josh McDaniels earlier this month and Belichick also attended to get a closer look.

Reynolds will likely not be playing his college position at the next level because he doesn’t fit the prototypical mold of an NFL quarterback. Navy’s signature triple option is not replicated in the NFL and Reynolds throwing statistics do not meet the standards pro scouts are looking for. However, Reynolds has characteristics that make him a likely candidate for running back, slot receiver, and punt returner. And the Patriots have a history of taking former college quarterbacks and turning them into productive offensive players: Julian Edelman played quarterback at Kent State University,

Most importantly, Belichick knows the character and determination Midshipmen football players have after going through a rigorous four-year program in Annapolis. Many times in sports, determination and the will to win trump outstanding athleticism.

Let’s hope Reynolds receives a phone call later this week to prove that theory on Sundays.