For the first time ever, the Army-Navy basketball matchup comes to Madison Square Garden in New York City on Jan.... 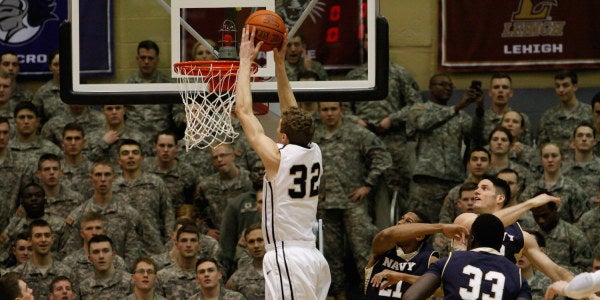 For the first time ever, the Army-Navy basketball matchup comes to Madison Square Garden in New York City on Jan. 23, and both teams are poised to make a serious run in the Patriot League.

While the basketball rivalry doesn’t normally get as much attention as its football counterpart, Army-Navy basketball has just as much passion. Reggie Miller, the former Indiana Pacer All Star who has called several Army-Navy games in the past, knows what it is like to play a rivalry game in the world’s most famous arena. The Pacers’ playoff games in 1990s and early 2000s against the Knicks with Spike Lee antagonizing Miller from his courtside seats were epic.

Miller told the Times Herald Record in 2012, “It’s basketball, but it’s the intense rivalry between the two schools. That’s what lured me into making this a long-lasting relationship where I can call all the Army-Navy games. It’s a wonderful tradition.’’Miller won’t be calling the game this year, but he recognizes the special tradition these two institutions have formed.

Army (12-6) and Navy (14-5) both enter the game with competitive records and marquee basketball names from their pasts. But the two service academies have had different levels of success throughout their basketball history.

Related: This former Navy QB is setting himself up for a post-military NFL career.

Former Indiana University head coach and NCAA Hall of Famer Bob Knight began his coaching career at the U.S. Military Academy. During his tenure at West Point (1965-1971), Knight, nicknamed “the General” led the Black Knights to 102 victories. One of Knight’s former players recently passed him to become the all-time winningest coach in Division I history. Mike Krzyzewski, the current coach and basketball legend at Duke University, got his start as an Army assistant coach and a former Army player under Knight.

Unfortunately, neither The General nor Coach K could lead Army to something all college basketball teams strive to achieve: a berth in the NCAA tournament.

Army is one of only five NCAA teams never to land a spot in the tournament The four others: Northwestern, St. Francis Brooklyn, The Citadel, and William & Mary. With quality victories over Monmouth and the Air Force Academy, along with a seasoned team, Army is making a case for removing this dubious distinction.

The Black Knights have started five seniors the majority of the season (senior star Tanner Plomb recently fell victim to injury). The same group of five also started as freshmen four years ago. That type of continuity is almost unheard of in college basketball.

“All of us are best friends, we do everything together,” guard Kyle Wilson told West Point Athletics in a recent interview. “It’s been great to have a close group of guys to go through everything with. After our first couple of games at prep school, we could all feel a great chemistry between us.”

Now Army’s seniors are striving for more than just continuity.

“Making history in that regard is what we are focused on,” said Army forward Tanner Plomb at the aspect of earning a berth in the tournament.

Navy’s basketball history is much different than that of its rival. 2016 marks the 30th anniversary of Navy’s deepest run in the tournament, an Elite 8 appearance led by David Robinson, who went on to become an NBA legend and hall of famer. Navy has made a total of 11 tournament appearances, but the Midshipmen have struggled over the past few years and have not made an NCAA tournament appearance since 1998.

Steady improvement this year, along with three victories over Army in the 2014-2015 campaign have resurrected hopes in Annapolis. Navy is led by two outstanding sophomore stars: 6-foot, 4-inch guard Shawn Anderson and 6-foot, 6-inch forward Jace Hogan, along with a dominating inside presence from senior center Will Kelly. Kelly ranks in the top 10 in the NCAA this season in overall blocks with 55 total. Anderson and Hogan are averaging a combined 23 points per game to lead all Navy scorers.

“I don't think this team has reached its potential yet,” said DeChellis. “I don't think we are clicking on all cylinders offensively yet. I think there is a lot of improvement that we can still make and that is what is exciting to me about this squad.”

The Midshipmen are currently tied for first place in the Patriot League with Bucknell.