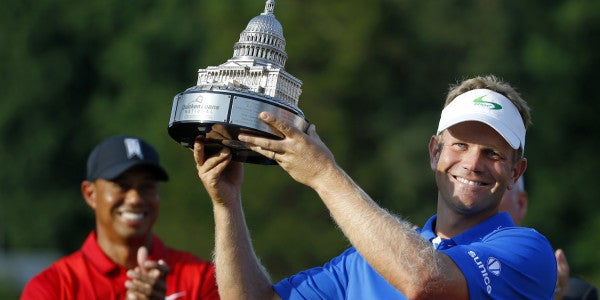 CBS golf analyst Peter Kostis called Navy Veteran Billy Hurley III’s victory on June 26 at the PGA’s Quicken Loans National golf tournament the “Golf story of the Year.” It might arguably be the golf story of the decade, but more importantly, the service academy sports story of the century.

When Hurley closed out his final round with a -2 under score of 69, he also closed out a year of terrible tragedy with a grand triumph. Hurley’s father committed suicide last year just two short weeks after the 2015 Quicken Loans National.

During the post-round interview session, Hurley choked up when Kostis asked him about the impact his father’s death had on him this past year.

Billy Hurley III hits a tee shot off the first tee at Waialae Country Club, in Honolulu, Hawaii during the second round of the 2012 Sony Open.DoD photo

“This couldn’t be a better tournament for my first PGA tour win…It’s been a hard year, it’s nice to have something go well,” he said.

Hurley also noted what playing partner Ernie Els said to him after the final putt: “I think your Dad is looking down, really proud of you.”

It was an emotional end to a journey that has taken the pro golfer more than 12 years to achieve. Hurley, a 2004 U.S. Naval Academy graduate who still lives in Annapolis, served as a surface warfare officer for five years in the Navy prior to becoming a pro golfer. In the post round interview, Hurley noted he was much more than just a golfer. He also won two ship handling awards while in the Navy and was selected over more senior officers to drive his destroyer through the Suez canal.

Related: This Former Navy QB Is Setting Himself Up For A Post-Military NFL Career »

To date, Hurley is the only golfer from a service academy to ever play on the PGA tour, much less win an event.

The Quicken Loans National makes honoring military veterans like Hurley a centerpiece of the tournament. Visitors can sign a wall which as a tribute to veterans or try their hand at making a hole in one for a donation to Operation Homefront which honors military families. The tournament was tailor made for a veteran to win.

It was also a hometown feel in many respects for the veteran who grew up in Leesburg, Virginia, some 35 miles from Congressional Country Club. Naval Academy faithful regaled him with chants of “21412” — the zip code for Bancroft Hall, the U.S. Naval Academy’s only dormitory and where all midshipmen reside.

Hurley was ranked number 607 in the world prior to his win and was playing on conditional status this year, meaning he did not have entry into all PGA events. He entered into this tournament on a sponsor’s exemption. His victory now qualifies him for the Masters, British Open, and a two-year exemption on the PGA tour.

But this remarkable achievement is more than just a personal one. It is an achievement that all future, present, and past service academy graduates can be proud of for two reasons.

The military abandoned the draft in 1973. Professional sports, fueled by television and advertising, took off and became more lucrative than your average military career. In today’s society, the desire to serve in an all-volunteer force does not overpower the lure of million dollar professional sports contracts.

Second, the way Hurley’s storybook victory played out is a far cry from what we often see today in both American culture and sports. In a world where presidential candidates are either fixated on their own braggadocio or embroiled as the subject of an FBI investigation, here comes Hurley: An individual whose humbleness and integrity is one to emulate for the ages. Case in point: Hurley announced yesterday he will skip the British Open, golf’s oldest championship, to instead attend his sister’s wedding.

There was no profanity laden gloating on the microphone in front of thousands of parade goers as seen from Lebron James. No going shirtless for some 96 hours after the victory like Cleveland Cavaliers JR Smith.

Just a simple hug and kiss from his wife and an embrace from three kids who know him as Dad.

Whether Hurley’s story is the greatest golf story of the year or one of the greatest sports stories of all time, one thing is absolutely clear. Hurley’s victory is confirmation to all service academy graduates and Americans that places like West Point, Annapolis, Colorado Springs, and New London, Connecticut, are getting it right when it comes to making both officers and future American leaders.