“He exemplified the true warrior spirit!” 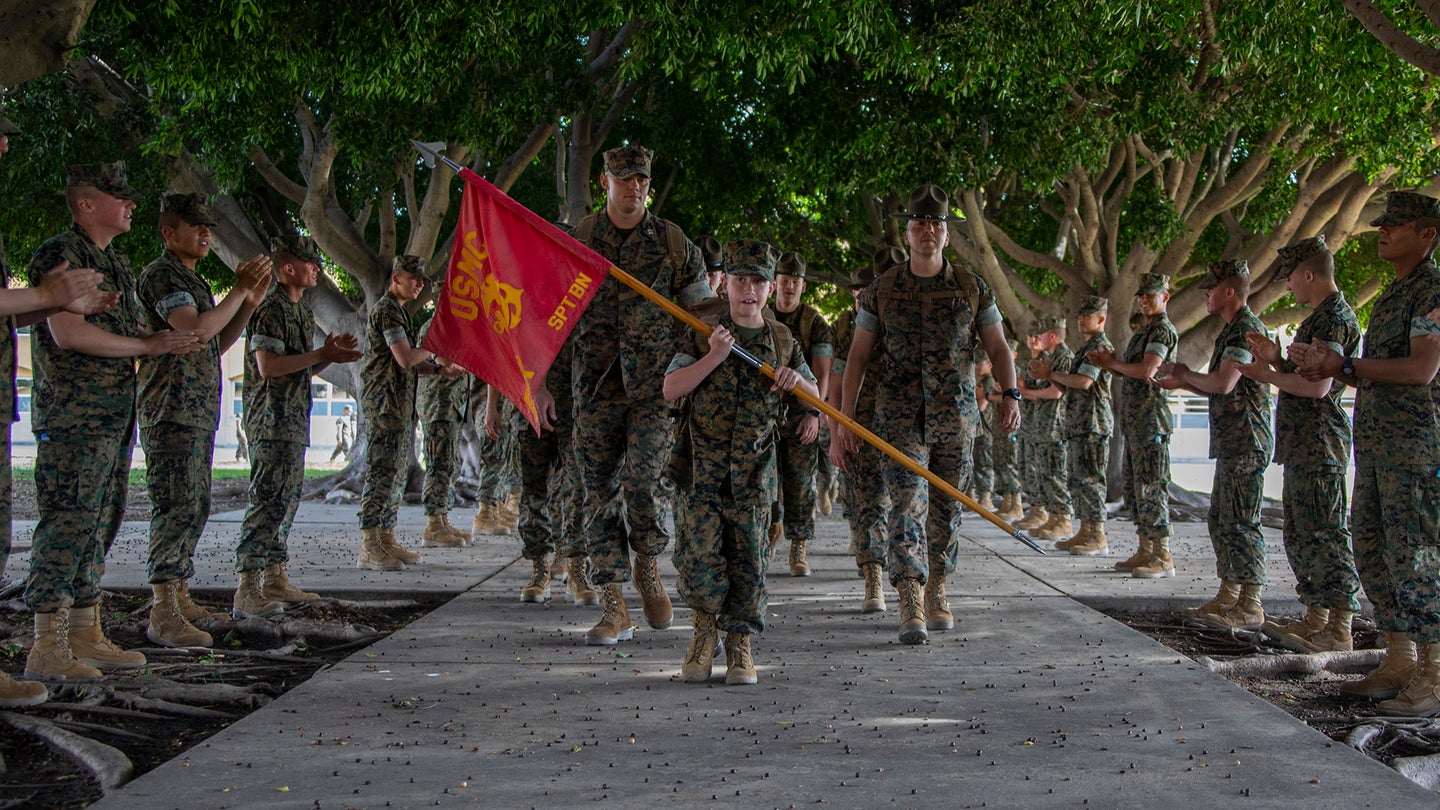 A 13-year-old boy with a serious heart condition was able to realize his dream and become a Marine for a day after graduating as the guide from an abbreviated boot camp organized by Marine Corps Recruit Depot San Diego and the Make-A-Wish Foundation.

The Marine Corps has released a series of pictures showing Wyatt, who was identified by his first name only, standing at parade rest to begin the receiving process and then getting the full, albeit condensed, Marine recruit experience.

The Make-A-Wish Foundation is a non-profit group that is dedicated to fulfilling the dreams of children “diagnosed with a critical illness, i.e., a progressive, degenerative or malignant condition that is placing the child’s life in jeopardy,” according to the group’s website.

Though Wyatt’s heart condition is treatable, it will prevent him from following in his sister’s footsteps and enlisting in the Marine Corps when he is old enough, said his father, Daniel. His sister is currently stationed in Hawaii.

“They are very, very close,” Daniel said. “He does everything that she does.”

All Wyatt wanted for his wish was to be a Marine for a day, but he had to wait for two years due to issues connected with the novel coronavirus (COVID-19) pandemic, his father said.

Wyatt’s Marine Corps experience took place from March 30 to April 1, during which he not only went through boot camp, but he also visited the 1st Light Armored Reconnaissance Battalion, 1st Marine Division —  and he ate his first MRE — and then had a graduation ceremony attended by his sister, said Christine Reed, a spokeswoman for the Make-A-Wish Foundation in San Diego.

When he arrived at Marine Corps Recruit Depot San Diego, Wyatt was picked up at the gate in a Humvee and taken to the Yellow Footprints, where all new Marine recruits begin boot camp, said Capt. Joshua Collins, a spokesman for the recruit depot.

Just like any other Marine recruit, Watt went through the receiving process, including the removal of all contraband, and he was marched to his squad bay, where a drill instructor taught him basic drill movements, he learned how to make his rack properly, and he listened to the series commander and series drill instructor speeches, Collins said.

On Tuesday, Wyatt told Task & Purpose that the very beginning of his time at boot camp was scary “but it was fun after that,” and his favorite part of the experience was taking on the confidence course.

“To me, it was really impressive that — for somebody with his heart condition — he went that first day through boot camp — it was a 12-hour day — and he refused to give up,” said Wyatt’s mother, Cameon. “He wasn’t taking shortcuts. He wasn’t saying, ‘No, I can’t do this.’ He was like: ‘All right, I’m going to do this until the end.’”

Sgt. Maj. Matthew A. Dorsey recently posted on Linkedin that granting Wyatt’s wish to become a Marine for a day was the pinnacle of his 24 years in the Marine Corps.

When the Marines at the recruit depot in San Diego heard about Wyatt’s request, they were able to make it happen within days, wrote Dorsey, who is currently serving as battalion sergeant major of the support battalion, recruit training regiment, at Marine Corps Recruit Depot San Diego.

“On Monday we found out about this request,” Dorsey wrote. “By Tuesday we had a set of cammies with his name on them, and the full issue to include dog tags. This morning at 06:45, Wyatt started the experience of his lifetime, stepping on to the legendary yellow footprints and getting to experience the reception to recruit training from our team of Drill Instructors!”

With his parent’s permission, Wyatt received a Marine recruit’s haircut, received a swim qualification class, went through an obstacle course, and even did pugil stick training with his sister, Dorsey wrote.

“No matter what we threw at him, he exemplified the true Warrior spirit!” Dorsey wrote. “We culminated the event with a mock Crucible hike that ended with Wyatt carrying the Battalion guidon and he was received by over 150 Marines and Sailors at the end to applaud him, and watch his official Eagle, Globe, and Anchor ceremony where he was certified, ‘Marine for a Day.’ To see this young man’s face, the expressions throughout this day not only from him, his family, but the staff that made this happen, was monumental!”

Dorsey included a picture showing him handing Wyatt a sergeant major coin and telling the young man how proud his fellow Marines are of his spirit and determination. Dorsey also told Wyatt that whatever challenges he encounters in life, his experience at Marine Corps Recruit Depot San Diego will always serve as a reminder that anything is possible.

“This was a powerful and humbling moment not only for me, but a reminder how influential our future leaders are and the importance of the example we set,” Dorsey wrote.

The sergeant major added that Wyatt had declined other opportunities offered by the Make-A-Wish Foundation because of the example that his sister set and he had the personal courage to never give up on his dream.