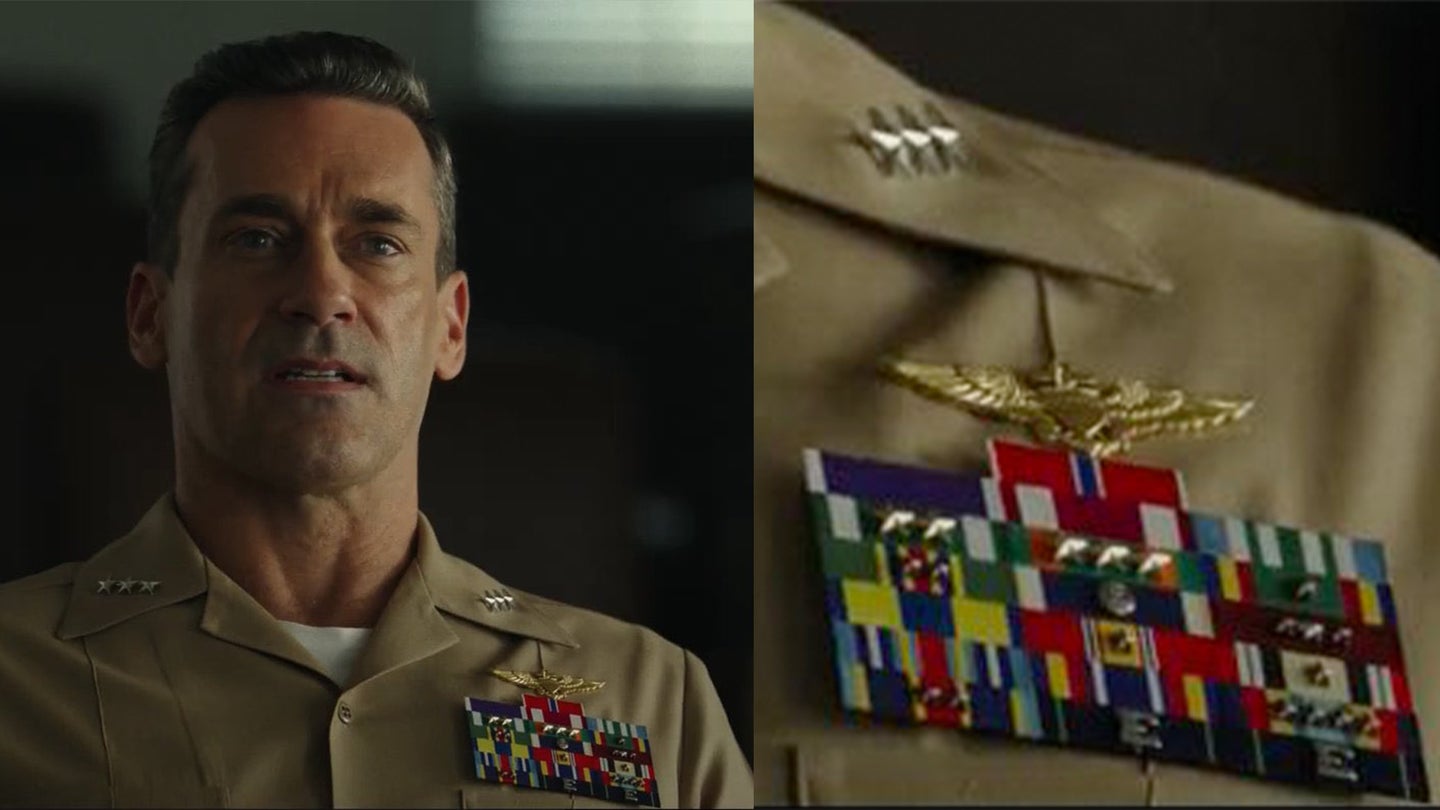 Barring, oh, something like another global pandemic, “Top Gun: Maverick” will debut in a couple of months after a three-year delay.

We know that, much like the first film, the movie received extensive cooperation and coordination from the U.S. Navy during production, including access to bases, the use of aircraft, filming aboard the Nimitz-class aircraft carriers USS Abraham Lincoln and Theodore Roosevelt, and an assurance to “work very closely to ensure that it depicts our aviators in a realistic way.”

Apparently not in the wardrobe department, though.

Let’s start with Tom “Iceman” Kazansky, now an Admiral and apparently commanding the Pacific Fleet. In his official service photo, he is wearing two Meritorious Service Medals next to each other. He also has two Sea Service ribbons in different places on his rack.

And, while it is in accordance with uniform guidelines to wear “‘all or some’” ribbons, Iceman has chosen to forego wearing his Meritorious Unit Commendation ribbon, Navy “E” ribbon, Navy Expeditionary ribbon and Humanitarian Service ribbon that we saw on a young Lt. Kazansky in the first film.

Certainly a much more Maverick-esque approach to the uniform.

Jon Hamm’s Vice Admiral with the callsign “Cyclone” certainly appears to have had an interesting career. With three stars on his Good Conduct Medal, Cyclone appears to have served between 12 and 16 years as an enlisted sailor before commissioning. Only enlisted sailors are eligible for the medal and each star denotes an additional award. Given Cyclone’s rank and what it suggests about the length of his career, he was likely an enlisted sailor in the Navy before 1996, back when the award required four years of continuous service, unlike today, which requires three years. On top of all that, he managed to achieve the rank of Vice Admiral, while still looking like Jon Hamm.

We’ve heard an explanation before as to just how Maverick could conceivably remain a captain after more than 30 years, but squaring this circle would be a superhuman feat of personnel management.

While Cyclone appears to have received a Purple Heart, he has never received the awards usually awarded to senior officers, such as the Legion of Merit, or Defense Superior Service Medal.

A long-running trope in the military says that it’s illegal to accurately depict military uniforms, but it’s a bit more complicated. It is illegal under the U.S. criminal code to fraudulently impersonate a member of the armed forces, but there is an exception made for theatrical productions.

“While portraying a member of the Army, Navy, Air Force, Marine Corps, or Space Force, an actor in a theatrical or motion-picture production may wear the uniform of that armed force if the portrayal does not tend to discredit that armed force,” reads the U.S. criminal code.

The enduring myth that movies and television shows are compelled in some way to factor in inaccuracies may stem from a 1970 Supreme Court case, Schact v. United States.

There, three people at a Vietnam War protest were arrested for staging a skit depicting the murder of Vietnamese civilians by American soldiers while wearing military uniforms. The court’s eventual decision was that the last part of the statute — whether a theatrical production does or does not discredit the armed forces — was a violation of free speech.

Most of these gaffes in film and television production are almost always a result of simply not having a technical advisor on set. Or not having the time or resources to find the right kinds of uniforms or equipment. And certain theatrical elements are always going to take precedence over reality.

“In the new movie they have clear visors, that’s not the most up-to-date form of helmet,” said Ward Carroll, who flew F-14 Tomcats for 15 years. “But you want to see the effects of that flying on Tom Cruise’s face, right?”

What’s notable about this particular oversight is the amount of input and assistance the Navy has given this film.

The production assistance agreement between the Department of Defense and the movie’s producers also stipulated that the Navy would have the oversight to “assign a senior staff, post-command officer to review with public affairs the script’s thematics and weave in key talking points relevant to the aviation community.”

Is noticing the wrong ribbons a bit nitpicky? Perhaps. But when the Navy has this big of a role in the production, it pays to get its money’s worth.

Perhaps this can be fixed in post-production, for when the Department of Defense receives “ten digital videodisc (DVD) copies of the completed production to DoD for internal briefings and for historical purposes.”