'He doing well and is on his way back to base with the rest of the team.' 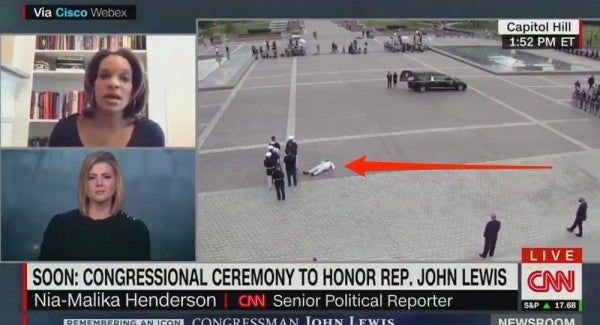 A sailor serving with the honor guard for Rep. John Lewis (D-Ga.), collapsed on Monday while the Congressman and Civil Rights icon arrived in the Capitol Rotunda to lie in state.

‘The United States Navy Ceremonial Guard are consummate professionals, but even they are vulnerable to the forces of Mother Nature,” said Ed Zeigler, a spokesman for Naval District Washington. “The sailor in question passed out due to extreme heat and dehydration. He is doing well and is on his way back to base with the rest of the team.”

Monday was yet another sweltering summer day in Washington, D.C., with temperatures in the 90s when Lewis’ flag-draped casket arrived at the U.S. Capitol.

Lewis died on July 17 at the age of 80. He was first elected to Congress in 1986 after spending years a civil rights leader, during which he spoke at the 1963 march on Washington, D.C., at which Rev. Martin Luther King Jr. delivered his “I Have a Dream” speech. Lewis was also beaten by Alabama State Police on the Edmund Pettus Bridge in the infamous “Bloody Sunday” incident that prompted Congress to finally pass the Voting Rights Act of 1965.

Video of that member of John Lewis's honor guard collapsing (apparently from the heat). He appears to be okay. pic.twitter.com/i0JKKXx8Ra

At 1:52 p.m., CNN was showing a video of Lewis’ hearse and the honor guard standing at attention when the sailor fell to the ground.

Fox News reporter Chad Pergram tweeted that it appeared a Coast Guardsman replaced the sailor in the honor guard.

It is not uncommon for service members standing in formation to pass out from the heat. That is why troops are advised not to lock their knees, especially on hot days.