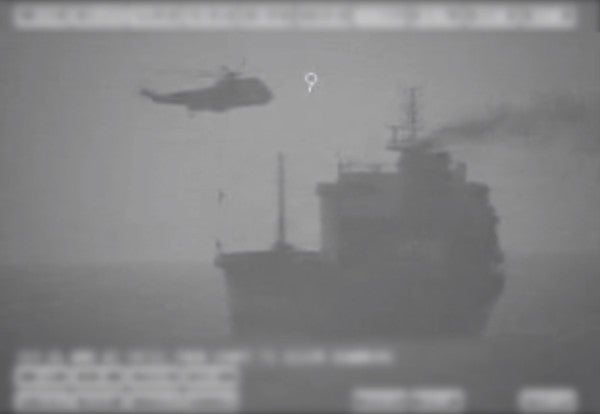 WASHINGTON (Reuters) – The United States military on Wednesday said that Iranian forces had boarded a civilian vessel in international waters in the Gulf.

The U.S. military's Central Command released a grainy black-and-white video on Twitter showing a helicopter near a large ship.

“Today in international waters, Iranian forces, including two ships and an Iranian 'Sea King' helicopter, overtook and boarded a ship called the 'Wila,'” the U.S. Central Command said in a tweet.

According to Refinitiv tracking data, Wila is a Liberian-flagged oil tanker and was currently anchored near the United Arab Emirates' port of Khor Fakkan.

A U.S. official, speaking on the condition of anonymity, said the incident took place near the Strait of Hormuz and the ship was eventually released by Iranian forces. The official said the United States military was not involved in anything other than monitoring the situation.

Tensions between Iran and the United States increased last year following a series of incidents involving shipping in and near the Gulf.

In July 2019, Iran briefly seized a British-flagged oil tanker in the Gulf after Britain seized the Iranian tanker Grace 1, accused of violating sanctions on Syria.