'They need to be in their goddamn green-ass uniform and not in Army military camouflage.' 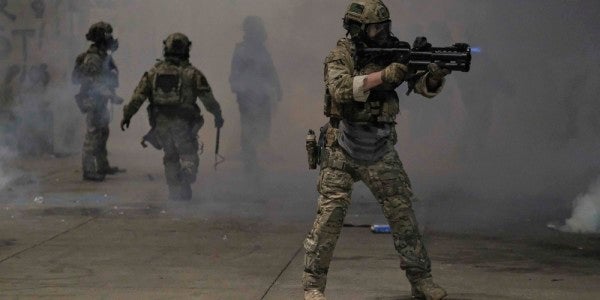 You can be forgiven for thinking that U.S. troops have been dispatched to the streets of Washington, D.C., Portland, and other cities in recent weeks. The news has been rife with concerning videos and images of little green men kitted out with military gear as they confront – and sometimes beat – protesters, including at least one U.S. Naval Academy alumnus.

But the U.S. government has not declared martial law. The people wearing military camouflage uniforms – and, in some cases, carrying M4 carbines – are from federal law enforcement agencies. They are border patrol officers, U.S. Marshals, and other civilian police officers. They are not U.S. service members, no matter how much they may resemble them.

“When people who have served in the military for a long time have to look very hard at the photos and video from Portland and places like that to tell who these individuals [federal agents] are, then the average citizen is going to easily confuse what they see as a militarized response rather than a law enforcement one,” said retired Marine Col. David Lapan, a former spokesman for the chairman of the Joint Chiefs of Staff and the Department of Homeland Security.

Indeed, some media outlets have erroneously referred to federal officers as troops — and that misperception that the military has assumed a domestic law enforcement role is bad for democracy, according to Lapan “It creates the perception that the U.S. military is being used to suppress the American people.”

Chad Wolf, the acting head of the Department of Homeland Security, told reporters on Wednesday that border patrol officers are wearing camouflage in Portland because that’s the uniform they wear when they are deployed to the southwestern border.

“That is their everyday uniform and it is completely appropriate,” Wolf said at a news briefing. “They have insignia on their uniforms that read police and they have patches … that indicate which agency they are from.”

However, both Defense Secretary Mark Esper and Army Gen. Mark Milley, chairman of the Joint Chiefs of Staff, have stated that police should be distinguishable from U.S. service members so that the general public does not mistakenly think the military is performing law enforcement duties.

The issue first arose during protests in Washington, D.C., in June after National Guardsmen and some federal authorities appeared in similar uniforms, Milley told the House Armed Services Committee recently.

“You want a clear distinction – visually – visual distinction between that which is police and that which is military because when you start introducing [the] military, you’re talking a different level of effort there,” Milley said during the July 9 hearing.

During the 15 years that I’ve had the honor to tell service members’ stories, I’ve learned that troops have no desire to serve as a national police force on American soil. As one crusty noncommissioned officer told me years ago, the military’s mission is “to go to where the terrorists live and f–k up their neighborhoods.”

Still, active-duty troops have been used in response to civil unrest in the past, such as during the 1992 Los Angeles Riots. It is also true that service members take an oath to defend the U.S. Constitution against all enemies both foreign and domestic.

If that’s the case, then why is it bad for democracy if Americans have a hard time distinguishing between domestic law enforcement agents and troops?

One reason is that the public is generally not in favor of blurring the lines that separate the roles of police and the military, Lapan said. And while the Oath of Enlistment mentions domestic enemies, it was changed around the time of the Civil War because the Southern states had launched an insurrection.

“I think the context of ‘domestic enemies’ lends itself more to the idea of someone that would try to overthrow the government,” Lapan said. “We’re talking about that type of activity, not protests – not even criminal activity.”

Normally, U.S. troops are used for humanitarian missions inside the United States, such as in the aftermath of Hurricane Katrina, Lapan added. In fact, when Army Lt. Gen. Russel Honoré took command in New Orleans following the devastating 2005 hurricane, one of the first things he did was instill in every first responder that they were not in a war zone.

Now retired, Honoré was just as blunt when he told Task & Purpose that federal law enforcement officers have misappropriated military uniforms in order to look intimidating.

“Law enforcement should not be wearing military uniforms,” Honoré said. “Military uniforms are designed to blend into the terrain and it’s a function of identifying our soldiers on the ground. The police need to stay in their lanes.”

He also said he doesn’t buy Wolf’s explanation that the border patrol is just wearing their normal uniforms.

“That’s bullshit,” Honoré said. “They need to be in their goddamn green-ass uniform and not in Army military camouflage.”

“SWAT teams, sheriff’s office, border patrol, go get your own goddamned uniforms,” he said. “There’s nothing that a camouflage uniform can do for you in an urban operation other than [to] portray a sense of authority that you are big, you are bad, and you are armed. So get your own shit.”