A West Virginia town of 8,400 people just picked up an MRAP for some reason

Does a small town in West Virginia really need a tactical vehicle designed to deal with improvised explosive devices in Afghanistan and Iraq? 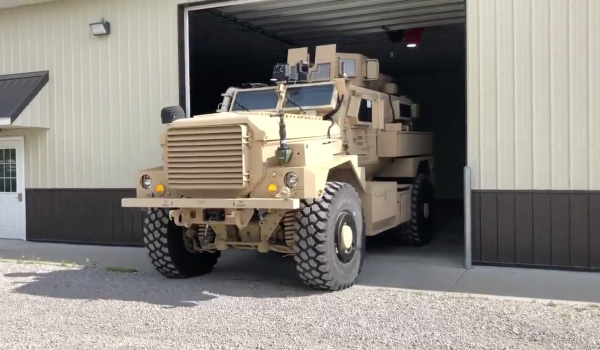 Since 1997, the Defense Department has transferred more than $7.4 billion in surplus equipment from tactical gear to armored vehicles to more than 8,000 law enforcement agencies across the country as part of it's 1033 program, according to the Defense Logistics Agency.

As of Friday, that includes a Mine-Resistant Ambush Protected light tactical vehicle (MRAP) to the town of Moundsville, West Virginia, which has a population of roughly 8,400 people as of 2018 and was recently ranked one of the safest cities in the state based on it's crime rate:

The Moundsville Police Department has added a vehicle to the fleet! I’ll tell you everything this MRAP offers- and explain how the department get it for free- tonight on @WTOV9 pic.twitter.com/qveCV7X1i9

The above tweet from WTOV reporter Jaime Baker went relatively viral on Twitter for a fairly obvious reason: it seems ridiculous that a small town in West Virginia needs an armored vehicle designed to resist improvised explosive device attacks, a threat that is almost certainly not plaguing the local police.

But it also underscores one of the fundamental problems with the 1033 program, namely the lax nature of the military-to-police equipment pipeline. Indeed, a 2017 sting by the Government Accountability Office found that law enforcement agencies could easily obtain millions in “controlled items” deemed too sensitive for public use (including MRAPs) with little to no oversight.

The 1033 program was established in 1997, but the Obama administration implemented restrictions on the program in 2014. The change came after public outcry over images of heavily-armed law enforcement officers facing off against unarmed protesters in the streets of Ferguson, Missouri.

Among the military-grade equipment funneled to local police forces, according to a 2014 New York Times investigation at the time: vehicle-mounted .50 caliber guns, tens of thousands of M-16 assault rifles and ammunition, grenade launchers, combat knives, bayonets, camouflage, and MRAPS — all equipment that, arguably, local police forces have little use for.

“We've seen how militarized gear can sometimes give people a feeling like they're an occupying force, as opposed to a force that's part of the community that's protecting them and serving them,” Obama said while announcing the new restrictions in 2015. “Some equipment made for the battlefield is not appropriate for local police departments.”

As Task & Purpose previously reported, research suggests that the presence of military equipment and weaponry may actually cause both police officers and suspects to engage in increasingly violent activity. Indeed, a post-Ferguson poll found that a plurality of Americans overwhelmingly opposed the use of military gear by local law enforcement despite their relative confidence in the police.

Yet in 2017, President Donald Trump restored the 1033 program as part of a “multi-front battle” against crime, drugs, terrorism, and “a culture in which family and discipline seem to be eroding further and a disturbing disrespect for the rule of law,” as then-Attorney General Jeff Sessions put it at the time.

The issue of transferring military surplus gear to law enforcement agencies has gained attention in recent weeks amid the nationwide protests against police brutality in response the death of George Floyd, an unarmed African-American man, at the hands of a white Minneapolis police officer.

Those protests, like those in Ferguson in 2014, were defined by images of heavily-armed police officers — in some cases better equipped than the National Guard detachments deployed to support them — clashing with unarmed protestors in the streets of American cities.

Rep. Ruben Gallego (D-Ariz.), a Marine veteran a member of the House Armed Services Committee, said in early June that he planned on introducing a provision to the fiscal year 2021 defense budget to significantly curtail the flow of military equipment into the hands of local police.

“These police officers should be peace officers. The idea that we’re handing them these weapons of war creates a culture that is not conducive to the police-community relationship,” Gallego told CQ-Roll Call at the time.

Whether Gallego's provision will actually make it into the fiscal year 2021 NDAA remains to be seen. Until then, at least the residents of Moundsville can rest easy knowing that, in the event that IEDs suddenly start popping off in the streets, their local police force is ready to meet the challenge.