Christopher David has a message for his fellow veterans: If you're ever interviewed on national television, make sure you don't make it all about you 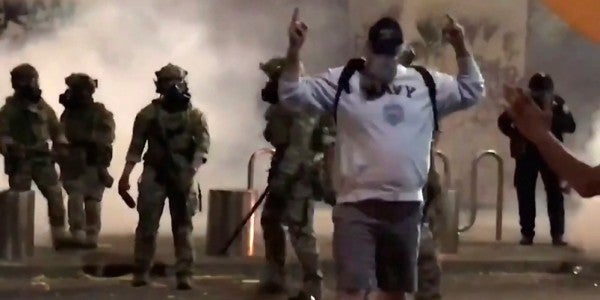 Christopher David has a message for his fellow veterans: If you're ever interviewed on national television, make sure you don't make it all about you.

David gained national attention after footage of the 53-year-old Navy veteran shrugging off blows from federal law enforcement during protests in Portland over the weekend went viral.

In the footage, David is shown stoically taking baton blows and pepper spray to the face while wearing a Navy sweatshirt, finally turning and flipping the unidentified federal officers who assailed him a pair of middle fingers.

Here’s the longer version of the protester being struck repeatedly by federal police tonight in Portland pic.twitter.com/v9BljIkLK0

While the video is undeniably badass, David's response to the incident is even more so: rather than making a recent interview with ABC News about himself, the Navy vet sought to refocus viewers' attention on the circumstances that led him to protest in the first place.

“I … want to use my 15 minutes to refocus the whole discussion back to Black Lives Matter as opposed to an old white guy who get beat up because I don't think I'm worth the attention, to be perfectly frank,” David said. “I think it's a little overblown, to be perfectly honest.”

Navy vet seen in viral vid clashing w/federal officers in Portland tells @ABC he wants to use attention on him "to refocus this whole discussion back to Black Lives Matter."

“If I had been a black veteran…do you think I would have gotten as much attention as I did?” pic.twitter.com/OZHsFCqkE3

Citizens have flooded the streets of American cities for weeks to protest police brutality and racial inequality since the death of George Floyd, a Black man, at the hands of white Minneapolis police officers back in May.

“I was an old white guy that got beat down … that's an acute situation, right? Being a black person in this country is a chronic situation every day. So no, I didn't get a taste, I just got beat up,” David continued.

“If i had been a black veteran that had gotten beaten down, do you think I would have gotten as much as I did?” he added. “If they can beat somebody down like me, they can beat anybody down.”

You can watch the entire interview below starting around 5:17