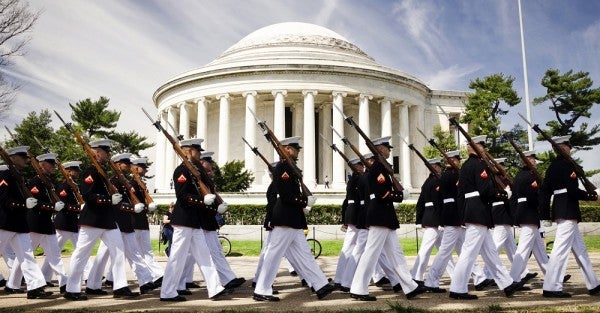 The few, the proud, the Marines: custodians of a proud martial tradition dating back to Nov. 10, 1775. So it might surprise you to know that the Marine Corps doesn’t know why its motto is Semper Fidelis. The iconic phrase, Latin for “always faithful,” has captured the spirit of Marines, past, present, and future, since the 1880s. But the reasoning behind its selection is still unknown.

No, really. We asked the Marine Corps, and they didn’t know. Neither did anybody else. Turns out the only person who could have told us for sure is this guy, Col. Charles Grymes McCawley, the eighth commandant of the Marine Corps:

The son of a Marine captain, McCawley served in the Mexican-American war at the Battle of Chapultepec and later during the Civil War. He held the Marine Corps commandant post for 15 years until retiring in 1891 and is credited with a number of lasting advances for the service. He was instrumental in raising training standards, securing a quota for Marine officers from the Naval Academy, and enforcing Corps-wide uniform regulations (though you can’t blame him for uptight grooming standards — just look at that ’stache.) He also made the Marines early adopters of cutting-edge technology, like the typewriter and and the telephone.

In 1883, McCawley made “Semper Fidelis” the official Marine Corps motto. Beyond that, details are pretty scant. Here’s what we were able to find out about the Corps’ most cherished credo.

It wasn’t the service’s first snappy slogan. There was “Fortitudine,” Latin for “with strength”; “To the shores of Tripoli,” commemorating the Marines’ action at the Battle of Derna in 1805, which got a song eventually, too; and then there was “Par Mare, Par Terrum,” Latin for “By Sea, By Land,” a motto shared by Britain’s Royal Marines.

The emergence of Semper Fidelis— often shortened to Semper Fi — as the Marines’ motto came a few years after the service decided to make some aesthetic changes to its uniforms and iconography, changes that would better capture the elite and professional nature of the Corps.

In Semper Fidelis: The History of the United States Marine Corps, noted military historian Allan Reed Millett draws a connection between these uniform changes, made by McCawley’s predecessor as commandant, Col. Jacob Zeilin, and the adoption of the Semper Fi motto. It all started, Millett writes, with Zeilin’s adoption of “a more distinctive and dynamic cap insignia: An eagle perched on a globe (showing the Western Hemisphere) superimposed over an anchor.”

The commandant, of course, had jacked that now-famous eagle, globe, and anchor from the British Navy’s globe-and-laurel crest. Which is fine, since America pretty much stole the whole idea of a Marine Corps from Britain and made that, better, too.

In any case, the E.G.A. became standard on all Marine uniforms by 1875. And the commandant went right back to the British well for inspiration: Zeilin stole the Royal Marines' “Par Mare, Par Terrum” motto, too. But after succeeding Zeilin as commandant — and perhaps thinking his predecessor had taken the British mimicry a little too far — McCawley changed the motto to the more original Semper Fi.

So, we know that in 1875 the service went through some changes for the sake of a sharper image; it got a new emblem, and a newish motto. And no one might begrudge McCawley’s decision to trim back at the service’s borrowed phrasings. But that doesn’t answer the question: Where’d he come up with “Semper Fidelis,” anyway?

While we may never know for sure, there’s plenty of history to the phrase itself. According to records provided by the Marine Corps History Division, the motto has its roots in Irish, Scottish, and English nobility, as well as among military outfits in 17th-century Europe whose members may have emigrated to the American colonies in the 1690s.

“As is the case with most Latin phrases which express an exalted idea in a pithy manner, ‘Semper Fidelis’ has a long and honorable history among mottoes,” the Marine Corps History Division said in a statement provided to Task & Purpose.

That included its adoption by “many of the ‘Wild Geese of Limerick’ who had fought in Ireland under Patrick Sarsfield and who took their martial talents to the Continent after their defeat in the Jacobite Wars (1691),” according to the statement. Those ornery warriors adopted the motto “Semper et Ubique Fidelis”: “always and everywhere faithful.”

Which sounds pretty cool, but isn’t really the same as proof. “No records have yet been uncovered to indicate the reason for the adoption of this particular motto, ‘Semper Fidelis,’” the Corps History Division told us.

That’s as much as we know. We could know more, but for a Marine, McCawley kind of sucked at writing things down with his ink stick.

“The problem is, McCawley’s papers and everything else, they’re not complete,” Patrick Mooney, a researcher with the National Museum of the Marine Corps, told Task & Purpose. “We don’t have a full accounting of the deliberations for why he chose Semper Fidelis. I’ve never read anything, or seen a document. I’ve never seen anything. It may have been an arbitrary choice by the commandant.”

So there you have it, the Marines don’t know why Semper Fi is their motto, because the commandant of the Corps failed to keep an accurate logbook. Cue chuckles from enlisted Marines across the globe.

Then again, perhaps the real history of Semper Fidelis doesn’t matter much to the men and women who take it as their credo today, according to Maj. Brian Block, a Marine Corps spokesman: “Arguably, at this point, what's more important is what the motto now means to current and former Marines who carry on that tradition of ever faithful service to their Corps and country that a Marine of any generation or century would recognize.”