After years of forcing aquaflage on sailors, the Navy announced on Aug. 17 that it will begin fielding its new... 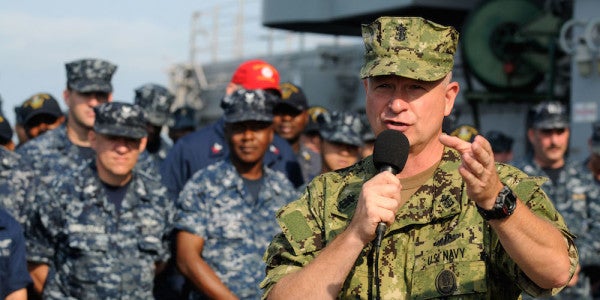 After years of forcing aquaflage on sailors, the Navy announced on Aug. 17 that it will begin fielding its new working uniform — Navy Working Uniform Type III — in October 2017.

The roll-out of the tough-looking uniform will take roughly two years, but sailors will continue to wear their cool-toned NWU I uniforms, more fondly known as “blueberries,” until they are phased out on Oct. 1, 2019.

The new uniform, which consists of green and tan woodland cammies, has been issued to expeditionary sailors for six years, and presents a stark but welcome contrast to the NWU I’s blues.

“It's a change of color really, but I think it's pretty awesome,” Petty Officer 3rd Class Jose Menjivar told Navy Times back in 2016. “I had a chance to wear the uniform, it's pretty comfortable.”

The fleet guidance also lays out the schedule for distribution as follows:

The uniform also comes with a few changes, Task & Purpose previously reported. For starters, the collar has been altered and will no longer feature sailors’ ranks. Rank devices will now be displayed on sailors’ chests instead. And the wear of “Don’t Tread on Me” and reverse U.S. flag patches may be considered by individual unit commanding officers.

And although you’ll have to kiss the aquaflage goodbye (or, you know, burn them in a dumpster), at least you’ll get to keep your government-issue, black-leather working boots.